So, How'd That Work Out For You?

It's August 23, do you know what your farmers are up to?

Quick Review
Just in case you need a quick review on what has gone before during this particular growing season, here it is in a nutshell.  Spring never came.  Or, at least, one that allowed fields to dry out so that they could be worked and planted didn't happen.  Things were tough enough that even some of the row cropped fields North of us were never planted this year.  That, in itself, says something.  In an effort to turn a difficult season into something worthwhile, we made a significant number of adjustments and quick decisions.  We thought you might appreciate hearing how some of them worked or failed *and* you might appreciate a bit more knowledge about how certain crops are doing.

Raised Beds
We used some old wood and got some black dirt and made 3 raised beds.  Each is about 8'x12'.  Like many things this season, these were not put in as early as we might have liked in order to get an optimal result.  But, you have to remember, we were putting these in as a part of a 'crisis response.'  Timing has little to do with it.

So far, we rate this as a successful effort.  We have harvested one succession of lettuce from all three beds.  A succession of chard is now a week away from its first harvest.  A second succession of lettuce is 1-2 weeks away.  The three tomato plants we put in the corner of one are doing very well.  For that matter, so is the basil clump in the middle of the tomatoes.

The jury remains out on how long the structures will last and how well we will be able to extend the season in these with some covers.  They are in a heavy snow load/drift zone.  So, final judgement is withheld until next Spring. 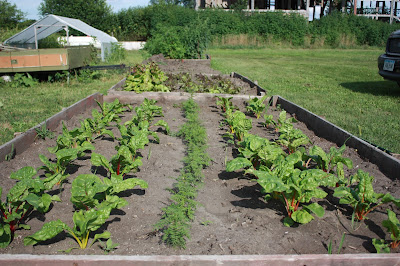 Allowing the High Tunnel Spring Crops to Roll Into Early Summer
We're not sure most of you caught this adaptation this year.  But, the cooler weather allowed kale, chard and kohlrabi to go longer in the high tunnel than usual.  So, while it was preventing field items from growing, we had these.  The tradeoff is that we were unable to get the Summer crops for the high tunnel very early at all.  That means the early beans, tomatoes, cucumbers, basil, peppers and melons were not put in on time - no where close.

We are paying for it now with very slow introduction of peppers and tomatoes.  We'll talk more about green beans in a bit.  The cucumbers started the same time as the field cucumbers, so that doesn't help.  However, we must not belittle how much the late Spring crops in the high tunnel helped us to fill shares in June.  Without them, we might not have started until July, which we feel would be very bad for us.  And, frankly, we don't think July-August shares have suffered greatly from the delay.  Boxes and bags have left full with excellent produce.  And, we should be able to provide tomatoes, peppers and melons from the high tunnel in greater amounts soon.  Cedar Falls saw how good the Red Zebras, Green Zebras, Wapsipinicon Peaches and Jaune Flamme tomatoes can look.

Was this a win or a lose?  If these summer crops come through for us during the next several weeks, we'll call it a win.  If not, the gamble works out to be a wash - with the feeling that it was a loss if you count the emotional side of the equation.

Spending Extra Time and Resources With Seedlings in Trays and Pots
We had a couple thousand 3.5" pots with plants in them and a few hundred trays with seedlings wanting to be planted.  And we couldn't put any of them in the ground.  Plants can only stay viable without stunting for so long in these containers without some effort to help them along.


We gave a couple of treatments of compost to help plants survive in their containers.  For the most part, this was a big win.  Our broccoli plants were in trays a bit long, but their health now is excellent - they are just beginning to produce.  The tomato plants held on and are generally healthy, though we do note a much higher incidence of plant loss than usual this season.  Our first tomatoes went into the ground on June 14.  We even lost some of those to heavy rain/saturated soil.  If these plants do hit a peak by mid-September, you can point directly to the additional efforts we took while they were still in pots as a big part of the reason we had any for you this year.

In other instances, we made later seed tray starts for some vegetables with the realization that most of our 1st (and sometimes 2nd or 3rd) successions would not get in the ground before the plant was damaged to the point of being worthless to put into the ground.  We put late plantings of summer squash, zucchini, cucumber and melon into trays and ended up throwing nearly all of the earlier succession plants into the compost.  So far, the summer squash, zucchini and cucumber have chimed in with good yields.  We'll see how the winter squash does.  We do note fruit starting on the melons.  We shall see.  We still reside on the edge with these.

Making Decisions to Give Up on Certain Crops
This is never popular with us.  But, if you expend too much energy on something that is likely to fail, other things fail too.

We only have a small area (about 15 feet) of watermelon planted this season.  And, these are there only because a tray was mixed up with another tray.  These are simply too long season for us to make work this year.  So, we dropped them.  The same thing applied to most of our winter squash crops.  We did put shorter season winter squash in.  We don't know if they'll be worth the effort, but we had to try.

The okra was seeded in late, but never received resources for weeding, so they have been mowed.  They were not likely to produce even with babying.  the sweet corn was never planted and all of the pumpkin plants were thrown into the compost.  There was likely more, but this is what comes to mind.

Looking back, this all makes sense.  It was unlikely that many of these would have produced.  And, the weather condensed the planting period for all of our crops into 1/4 the time we usually have for getting them all in the ground.  Since we're usually extremely busy planting during planting season when we have all of the expected time to do so, how could we expect to get everything in with that much less time?

Applecart Upset with Rotation of Crops
Some areas dried out.  Others did not.  We had to make choices.  We delayed (or canceled) some plantings and moved others.  When rabbits and weather took out 90% of our field planted peppers, we put 2 more rows into the high tunnel.  We canceled pumpkins and sweet corn so we could get kohlrabi, chinese cabbage, lettuce, pok choi and numerous shorter season crops in.  When the carrot crop in the field showed it was going to do well, we dropped the high tunnel crop and put in another row of green beans.

After a great deal of time spent making an excellent plan for the season, Rob had to swallow his pride and make a long list of adjustments - all while trying to stick to the purposes of the rotations.  For the most part, we've made things work.  With respect to getting food in the CSA shares, this was a big win.

Status on Some Crops We've Been Asked About

Green Beans
The green beans in one field went in on time in May.  Most of them were adversely affected by the wet weather.  Only a small amount seemed to make it through that.  And, those stunted and did little.  In response to that, we've moved to 2 rows in the high tunnel and one row in the pepper field.  The pepper field row was salvaged from weeds, but is a variety that doesn't produce as much.  Last year, we picked 1/2 ton of green beans.  But, last year, we had about 1000 feet of green beans producing.  This year, we have 220 feet producing.  Of that, 100 feet are producing at a marginal level.  So, if you were wondering what is up with the green beans, now you know.  But, if we hadn't made some adjustments, you might be looking at 0 green beans in your shares.  So - that's a good thing!

Tomatoes
Normal plant date at GFF for tomatoes is May 25.  This year, the first tomatoes went into the ground on June 14.  And, some of those actually died when we got a heavy rain soon after.  We kept them going in pots as best we could (see above) and we gave them little fertilization boosts, good mulch and trellising in an effort to treat them well.  They are still behind the game.

But, the plants look healthy - even if the healthy they look is the normal July 25th healthy instead of the August 25th healthy.  If Fall stays nice, we'll have plenty.

Winter Squash
We put winter squash vines in even AFTER the tomatoes this year.  Ideally, we'd like them in around June 1.   We threw many seedlings that just weren't going to make it.  And, we didn't plant many vines that were going to take too long to mature.  We have acorn squash, spaghetti squash and buttercup squash in.   There are some butternuts as well, but we really don't expect anything from them (110 days to production - that's 3 and 2/3rds MONTHS of growing needed).  Planted June 25 and you are deep into October....hm. 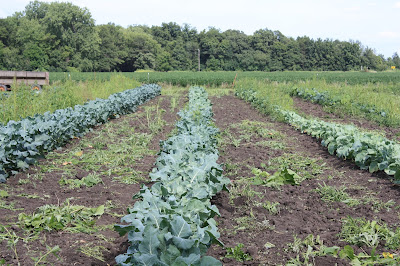 Broccoli
These went in late as well - but they are a shorter season crop.  They are just now starting to produce and they look extremely good.  They actually preferred some of the cooler nights in August.  Yes, the same weather the tomatoes and peppers didn't care for.

Melons
There are many short season melons in the ground.  they are vining.  They are setting fruit.  We're doing what we can for them.  They are also running out of time.  Typically, if we get past Sep 10 and the melons aren't getting ripe, they aren't likely to do so with any consistency.  The warm weather is actually going to be a huge plus for those plants. 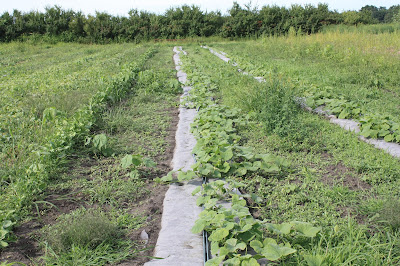 Eggplant
We're trying to save some eggplant from the weeds.  They lost the priority battle this year.  We'll be getting some of these.  But, we are also aware that eggplant are one of the more unpopular items we have in our shares.  We felt our time needed to be spent on some other things.  We're very sorry for those of you who love them.  We hope to pull enough of them out for the eggplant lovers to feel like they got a bit of them this season.

Potatoes
We'll see what the plants have done in a couple of weeks.  We got them in on time at the cost of lots of rain taking many of them out and stressing most of the others.  The following dry weather came at a time when they wanted more moisture.  This is part of the reason we worked with Tyler to help get some of his potatoes to you this year.  We wanted to be sure you received some potatoes as a part of your shares this season.
Posted by Rob Faux at 10:27 PM