Here we are in the lovely month of April.  At least it has been pretty nice thus far.  And, today, Rob harvested spinach from the high tunnel and a number of lucky people were able to purchase bags of our super tasty spinach.  Tammy and I are looking forward to diving into our own 'custom picked' bag of spinach as well.  There just isn't anything quite like our over-Wintered spinach for flavor and texture - we'll stack it up against any other spinach you can find.

But, that's not exactly what the subject of this post is about.  Many of you might recall our high tunnel build that occurred in 2010.  And, if you don't recall that event - or you are newer to our farm and our blog - here is a picture. 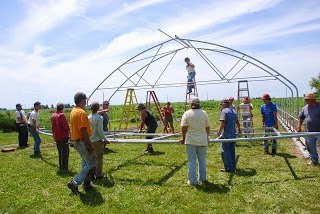 We put up the high tunnel in a just a few days as part of an extended field day.  Adam Montri, Mike Bollinger and Greg Garbos were all in attendance and gave presentations on the topic of using a high tunnel for season extension.  All in all, it was a positive experience.  But, let's be honest... we were the field day hosts.  I'm not sure how much of it we remember since we were run pretty ragged by the end.

But, on the plus side, this building has helped us provide good produce to people now every since 2010.  It is often our 'happy place' to go if there are issues with some of the field crops.  It was well worth the investment for our farm at the time we made it, even if it required some stretching and discomfort in the process.

So, here we are in 2015.  And, we have written a check for a second high tunnel to be put up on the farm this Spring.

The new building will go up in a different location on the farm.  We've learned our lesson from prior events and will not put all of our eggs in one basket by clustering our high tunnel buildings in one place.  But, the building itself will come from Four Seasons Tools and will also be a movable (2 position) high tunnel like the first.  The other difference?  The new building will be 96 feet long as opposed to 72 feet.  I suspect we'll be surprised by what a few extra feet inside the building will do for us.

Four Seasons has learned a few things and so have we, so we anticipate an easier build and a simpler integration into our farm operation this time around.  Once we know when the high tunnel will be delivered, we will make more announcements regarding the build.  But, if you have interest in helping at some point in the process, please let us know.

No Spring Extended Season CSA in 2015
Other than the fact that we'll need to take the time to get the building put up, we are making one major change to the 2015 season.  We will not be offering a Spring extension this season.  We will have some produce for sale, including asparagus, lettuce and spinach.  But, we wanted to allow ourselves to focus on getting a strong start to the regular season CSA and we didn't want to have the added pressure of putting up this building AND maintaining a Spring CSA at the same time.

What's the logic of adding a second high tunnel?
Removing the Spring CSA allows us to begin setting up the rotation that a two high tunnel system will provide for us.  Our intent is to have one building (the older one) move in the Fall and the newer one will move in the Spring.  One tunnel can focus on the early side of Spring, Summer and Fall while the other focuses on extending growing in the other direction (to the late side).  One building left us with tension between starting a new crop and wanting to let the current crop keep producing.  Two building should alleviate the problem.

A simplified version of the plan is as follows:

The current high tunnel will be used to get an early start on Summer crops, such as tomatoes, peppers, cucumbers, beans, carrots, beets, etc.  It will also be used heavily for the Fall extended season by planting the Fall crops in August in the uncovered location and then we will move the building over those crops in mid to late October.  Since the Summer crops were started early, they should be well past peak and we won't cry if we move the high tunnel off of them.

The new high tunnel will allow us to start Spring crops early under cover.  As April heats up, we will move the building off of these plants so they don't bolt and we can continue to harvest the colder season crops well into June.  The Summer crops in this building will be started later and will therefore be used to extend our Fall harvest of these sorts of veggies.  We can also focus more on some late started crops intended for overwintering in place (such as spinach or lettuce).
Posted by Rob Faux at 5:00 AM