One of These Things Stomps Weeds

The days are getting longer and the farmers are spending more and more time in the great outdoors.  Sometimes, they even get others to join them!  I'm just going to let the pictures help me write this blog post.  It seems like there is very much to share, but I'm having a hard time figuring out what I want to say... therefore....

One of These Things.. Is NOT Like the Others


I was washing eggs last night.  Ok, we wash eggs most days/nights on the farm - especially now that our hens have decided that laying eggs is a GOOD thing.  We are now pulling in between 5 and 7 dozen a day.  So, if you are interested in eggs, we have them!

In any event, as I was washing, I had the Sesame Street "One of These Things..." song going through my head.  Now, why in the world would I have that song in particular as an earworm?

Well, there are more eggs in the picture above than there were circles for Grover to figure out which one was different.  But, can you see the THING that is different in the egg picture?  Ya, well, we must have a pterodactyl in our hen house or something.

With respect to the Sesame Street skit: For the record, I thought the lower RIGHT circle was the different circle because the line was drawn WIDER than the others.  But, then I noticed one of the circles had a slightly flattened side, so I thought that one was different instead.  Then, they went and picked the SMALL circle.  Ok, ya.  I suppose that could be one way to look at it.

It's Not the Best Solution
We have many tomato and pepper plants started now.  Some, of course, will grow on the farm.  Others, we will sell to local gardeners at the Waverly Farmers Market or at a few plant sales in Cedar Falls by Hansen's Outlet.  Want a schedule?   Try this out!

We start these plants in the basement of our house with heat mats and grow lights.  It's not the best location, but it works well enough for us and hasn't caused us to move building a new area to start them a priority.  But, as you can see, we move the trays onto the floor from the heat mats for watering.  Makes for a mess, but that's just the way it is - life can be messy.

We had a service trip group from Wartburg College come out to the farm and volunteer for a couple of hours.   We're always grateful when these folks make an offer to lend a hand for some tasks that would surely take us much longer to do if it were only us.  This time around, we picked up some downed limbs and cut them up, moved some drip tape off of a field and cleaned up a couple field areas that had plant residue that wasn't going to break down in time for us to plant.

We do grow a little bit of sweet corn each year (if we get to it) and we have sunflowers as well.  In both cases, the stems do not break down for easy incorporation without some help.  I suppose we could do out there with the big mower and chop them up, but when you get help, it's not so bad to pull them out and throw them in a flair box.  Later, it goes into the compost pile.

There was enough plant residue that the flair box started to overflow, so I decided I needed to jump in there and be the 'trash compactor' for the day.  Hey!  If you can't have a little fun while doing your work, then ... um... Well, I'm not sure what I have to say about that.  But, it did add some spice to the task.

Is it Soup Yet?

The short answer is "yes."

Soup, short for Super Cali the Fragile Mystic Cat, decided that it was time to have her catlings/souplings.... 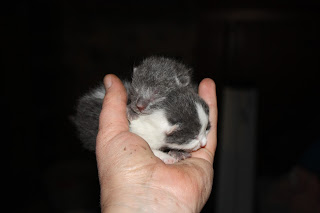 We are not sure why, but she chose a spot outside by the garage and she was apparently happy to show us her two kittens.  She was NOT however, at all pleased when Mrranda and Sandman wanted to see as well.  We (and they) got to witness how a mama cat will do nearly anything to protect her young from a perceived threat.  Let's just say that we are glad she doesn't see us as a perceived threat.

We moved these three into the garage initially and then into the basement.  They should be safe there for the time being until we can figure something else out.  We are not set on keeping these critters at this time, so if someone has interest, let us know.