We've said this for a few years now, but the iris flowers on the farm are a shadow of what they once were.  And yet, we still manage to be charmed by many of our old friends each year.  Perhaps this is the year we'll get to giving them the attention they so richly deserve.  But, even if we can't manage it, we know that some of our most dedicated stalwarts will return next year and the one after.

That's not a bad thing to take comfort in. 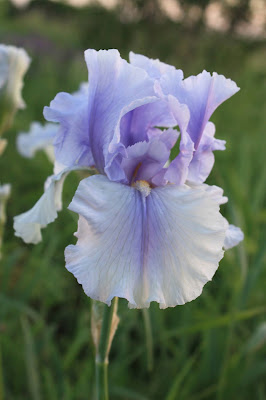 One of my all time favorites (Olympiad) made an appearance again this year.  With the frost coming (and then the hot dry winds) we knew the flowers would be short lived at the farm.  So, we picked most of the stalks we could and brought them inside before we could take a good picture of them.  As a result, I am relying on a picture from a year or so ago.

This turned out to be a good move because most of the stalks that remained outdoors had a pretty rough time of it.

The camera seems to make Olympiad appear a little more purple than my eyes see it in natural light.  But, that doesn't really matter.  I appreciate the subtle infusion of purple/blue into the white and take pleasure in seeing the little "caterpiller" (aka the "beard" on "Bearded Iris") with its progression from blue to yellow.

Would you like to learn more about the parts of an iris flower?  One easy to view site that does this is here.

I know some people like a more striking color combination.  And, I appreciate those as well.  But, this is an iris that I like to inspect up close - because there is so many subtle moments of beauty in a single bloom, that it can captivate me for quite a while. 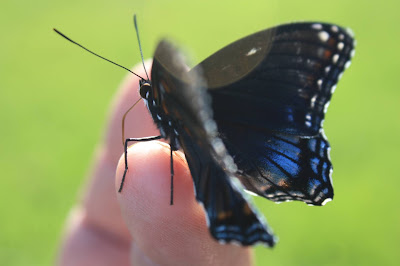 Speaking of captivating.  I watched while Tammy was captivated by and trying to nab a picture of a Red Spotted Purple that had taken a liking to being inside some of our buildings the last couple of days.  It was sitting on a feed sack and she was waiting for it to open its wings and show off the bright blue colors on the top side.

This particular butterfly was camera-shy and didn't open its wings long enough for her to catch it.

But, a year or two ago, I managed to get one to sit on my finger while I took multiple shots of it.  Let's just say that it also did not want to sit still for the camera, opening and closing its wings often.

There were MANY digital photos in that batch that I deleted, and these were among the best. 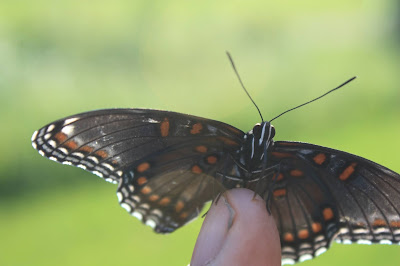 I'll take it as a positive that we got a shot of both the underside and the .. um... overside?  of the wings.  It was also a positive when this butterfly took off to investigate the rest of its world after consenting to this photo shoot.

Like Olympiad, who shows up every year with a stalk or two of flowers, we are usually treated to a Red Spotted Purple or two each year at the farm.  Unlike other "admiral" butterflies (such as the Red Admiral), we don't see them in great numbers.  But, when we do, they usually hang around the farm house and the outbuildings.  Almost as if they find us just as interesting as we find them.

I know that it can be hard to take a moment to watch a butterfly or observe a beautiful flower - but I encourage you to give yourself permission to do just that today.  I wish you the best as you try to fulfill this quest!

Have a good day everyone!