Not An Ill Wind?

Now that we have had hot, dry weather for several days in a row (and believe me, Tammy and I are beginning to "feel" the hot dry weather), let me remind you that on May 29th, we had a frost at the farm.

If you like amusement park rides, this should suit you just fine.

I just happened to take a peak at our solar production for recent weeks and look what I found. 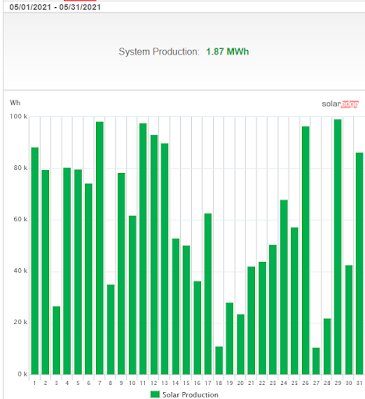 Now that I think about it, the day after the frost was a very bright day with beautiful blue skies.  But, I have to admit that Tammy and I weren't thinking so much about that.  Instead, we were trying to figure out how to get the covers off of the plants, get those covers dried off, rolled up and put away.

In fact, I don't think either of us was feeling terribly happy on May 29th.  Some days, you just don't have it in you to appreciate good things.

That's why it still pays to keep your "observer glasses" on so you can allow yourself a chance to reframe what felt like a bad day and maybe add a silver lining to those black clouds (hard to do on such a clear day.) 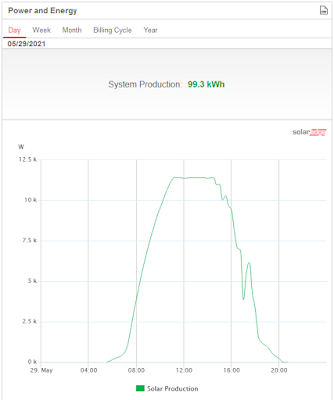 The surprising thing about the 29th is that there must have been a little cloud or two that ran between the sun and our solar panels a couple of times.  But we still produced 99.3 kWh of electricity.

Why is that a surprise to me?  Well, according to our records, that's the best production of electricity from our panels in one day... ever.

So, they say it is truly an ill wind if it blows nobody any good.  It must not have been that much of an ill wind, because even though it caused us some problems (like terminating our cucumber crop), it still gifted us with this.