Streaming Whatever Comes Up

Sometimes, you feel like there are things to share, but you don't feel like coming up with a theme or a thesis or.. whatever it is that sometimes hangs blog posts together.  So, today, we're just going to do the Genuine Faux Farm streaming service where you get whatever comes up at the moment as Rob's fingers hit the keyboard.

This could be interesting....

Or maybe disturbing, confusing or some other sort of "ing." 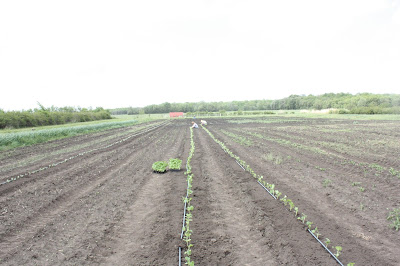 So, just over a week ago, we had some cold weather that resulted in a frost at the farm.  This was particularly disturbing after we were celebrating some significant progress in our farm tasks in the prior week and a half.

The problem with frost damage to crops is that you can't always fully assess the damage until a couple of days after the event.  Now that we're over a week out, the damage is clear.  The cucumbers did NOT fare at all well.  It looks like 75% of the crop is done.  We did have a few trays of back-up plants and we put them in already.  However, we have resorted to reseeding more trays in hopes that we can still run a long enough season to get the seed production we hoped to have for Seed Savers.

This is actually a 'double whammy' because the cucumbers were a key part of our PFI research project for the year.  Well, we'll make things work, but it won't be what we wanted - that's for certain. 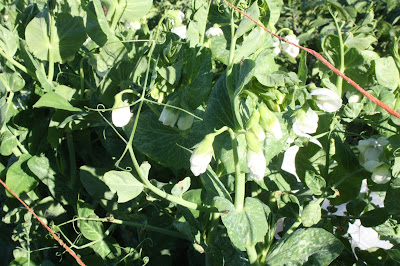 On the other hand, the snow peas are VERY happy right now.  They are glad we covered them and we pulled in 12+ pounds of snow peas on Sunday alone!  Hurray for the snow peas!

Sunday was a fairly busy farm day too.  The "Middle Earth" plot got a thorough cultivation pass with wheel hoes AND our newest named farm cultivation tool, "Millard."  More forthcoming about Millard in future posts.  We got drip lines down after cultivation and even finished putting in the rest of the butternut squash.  We also worked up the field just south of Valhalla and got irrigation going there.

You know, we really should come up with a better name for that field.

Actually, we have.  More than once.  But, the names just don't seem to stick.  That's the trick with naming things on the farm.  The name can be clever and even entertaining.  But, if it doesn't stick...  it... um... doesn't stick.  I'm not really sure what else to say about that. 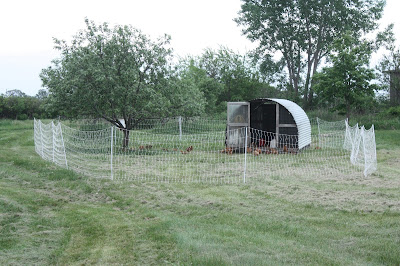 We are officially in THAT time of year.

It's also the time of year where we have to move the building for our two flocks of broilers every other day.  To be honest, it's not a horribly difficult task when the two of us work together.  But, it does eat up some time.  And, it is among the things that can kind of wear on you sometimes.

It probably has more to do with how life on the farm works.  We both get it into our heads that we'll get X, Y and Z done "first thing" tomorrow.  Then, we realize it is a "bird moving" day.

Never mind.  You have to move the birds first.  And maybe then you can get on that list of ten things you wanted to do "first thing" tomorrow.  Alas for us! 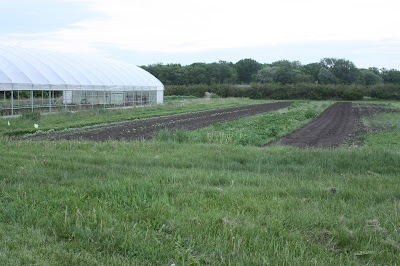 Hey, I told you I wasn't sure if I could hold a theme here and I certainly did not promise a logical flow or progression.  That's why I am showing you this picture.  It's the field(s) that is (are) south of Valhalla.  We need a name for them that sticks with us.  Thoughts?

I was just looking at the photos I have for this year and the last shots I took were right after the frost.  I really need to get out and take some new ones.  After all, things on the farm can change rapidly in June.  What is alarming to me is how green things look above and how much brown is beginning to show with our dry weather.  Hot, dry air with lots of wind tends to dry things out - and I guess that's what we're going to contend with for a while now.

It's tough on crops like peas and lettuce and it can be hard on seedlings.  We'll just do what we can and move on from there.

Speaking of which - maybe I've amused everyone enough for one day?  If I have - excellent!  If I haven't... well, go look at this blog post and see if it is more amusing.

See?  I've got you covered.  Have a good week everyone!