Where Have You Bean?

'Tis the time of year when blogging time is very limited and Rob did a very bad job of lining up a bunch of posts that would require only little tweaks so that he could keep June interesting for all of you.

So, you're just going to have to deal with a little bit of dry (bean) humor.

Ok, maybe the only humor here is the post label and the line just prior to this.  Otherwise, we are very SERIOUS people.  So there.

We had a reasonable dry bean harvest last year.  But, per the norm, we just didn't find the time to shell the beans.  Until this Spring.  Tammy's parents were willing to take a design we found on the internet and try to implement it so we could speed the process a bit.  Happily, it sort of works.  I suspect we just need to get better at using it and it will be fine.  Thanks Mom & Dad!

The good news is that we now have all of one container of unshelled beans left in the garage.  The rest have been shelled and are getting packaged up for distribution in next week's CSA.  How cool is that? 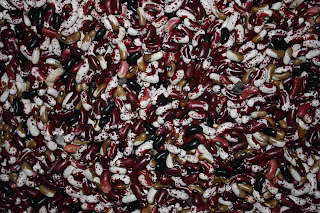 One of the great things about dry beans is that they store for a very long time with no real special storage conditions.  We just put them in a glass jar and they sit there and wait for us to soak them in water to use them when we want.

The sad thing about beans - most of the puns are kind of redundant...  you know, things like
Bean there, done that.
If I planted in circles instead of rows, you could say I've bean around.
Or... perhaps you could go South to Cuba and visit the Carob bean Sea.

You're welcome!  And have a nice day.
Posted by Rob Faux at 6:56 PM No comments:

Labels: Just Veg-ing Out, time to have pun

We're already into the month of June and we're not entirely sure how that happened!  We hope you will join us for the coming growing season and we'd like to offer up the following in an effort to help you to get to know our cast of characters on the farm.  You may notice that some of the text is kind of a lighter brown color - that indicates a link to a different blog post.  So, you can click to read more if you wish!

This is part II of our Cast of Characters Posts.  If you want to see the first post, you can click here!


You will find that we do not stop at giving names to cats on our farm.  Some of our equipment has been named for whatever reason we see fit.  For example, our truck is named Chumley.  If you know anything about the Robert Lynn Asprin series featuring Skeeve, you will know who Chumley is.  If you don't know that series, then you will simply know that our TRUCK is Chumley.  Good enough, we think!


When it comes to poultry on the farm, we tend to go back and forth between having names for individual animals and names for the group of animals in question.  This, of course, makes much more sense if you consider the fact that we raise many of our birds for meat production.  They simply aren't going to be around all that long.  And, when you have 150 broilers, naming them all is simply out of the question.

Then, there's Cucumber Frog.  Ok, it is likely that there is more than one cucumber frog.  All I can say is this.  Leopard frogs LIKE cucumbers.  They also like to wait until Rob is convinced that they aren't around before they jump and startle him while he's picking cucumbers.  Let's just say that there have been a few interesting contortions as a result of a Cucumber Frog startle event.

Again, there isn't just one.  And, no we don't always call a butterfly a 'flutter by.'  But, they are an important part of our farm, so they deserve mention.  Rob has actually had a Monarch land on the underside of the bill of his cap more than once.  But, Red Admiral butterflies seem be the most willing to land on people at our farm.

We have a fun story that includes the Spider in the Door that you might enjoy.  Go take a look.  Yes, we do have spiders on the farm.  Sorry if you don't like them.  We do need them on the farm, but certainly respect how it can creep one out if you accidentally back into a web.

We will periodically mention farmer friends of ours from Blue Gate Farm, Grinnell Heritage Farm and Scattergood Friends School Farm.  We visit each farm during the growing season and hold a 'Nota Conference' in the winter.  They're all just good people.  We like good people because.  Um.  They're good.


And, to finish up this post, we would be remiss if we didn't mention the Snort.  The Snort has now visited the farm twice.  Once to put in a new well at our farm and once to help us run frost free lines to our new high tunnel (last year).  The new well was not a planned event and it led to a three part story for our blog that many people have enjoyed.  If you have not, here is the link to Part III (which includes links to I and II).  We recommend you read them in order if you want to be entertained.
Posted by Rob Faux at 6:49 PM No comments:

This blog post has no agenda.  It has only one thing going for it.  It's a list!

There is very little joy in Mudville at the moment.  It's not a good thing when you hear that your team actually won a game and you're surprised.

Tammy and I decided that some of our travel pictures deserved to be printed and put on the walls of her office and/or our house.  We've been enjoying the process of rediscovering some of our favorite photos that we have only really looked at on our dirty computer screen.  (I really should get around to cleaning that).

3. Maybe It's Time for a Haircut
Once we get into May, Rob has a hard time finding extra time - especially during the day - to do some of the little things.  Things like - getting a haircut.  However, there is also a limited amount of time that he can tolerate hair that gets tied into knots by the wind.
4. Not Going Through THAT Certification Process

I am sorry that I do not recall who pointed this picture out to us. There is a reason we take spell checking seriously at our farm.

5. Worthy of a Caption Contest

What is Farmer Jill of Blue Gate Farm telling our friends from Grinnell Heritage Farm and Scattergood Friends School Farm?