Here is a quick crop report for those who are interested in all things GFF.

The cooler weather has been nice to work in, but it also slows down many of the warm weather crops.  It doesn't really hurt them, but it doesn't help us produce things at the level we would like or as soon as we would like.  Again, it isn't terribly concerning for most things.  It should work out fine - just in its own time.

Tomatoes - we're getting 'scouts' ripening at this time.  A 'scout' is an early set tomato that usually ripens 2 to 3 weeks before peak production.  So there may be a few tomatoes for large shares coming up soon.  Our peak for tomatoes is usually August 15-September 15.  Cooler weather will likely move it back a week.  We still have about 50 tomatoes to cage.  Oy... it always takes so long to do.

Peppers - just getting started.  There may be some in the Thursday shares this week.  Plants are looking pretty good, it a little small.  But, we've seen this before.  A little rain with some lightning and thunder will make these guys really take off.

Onions - we've got 600 row feet of onions that look really good.  They are starting to bulb out.  The guess is late August for them to start getting harvested.  Another 300 feet of onions are weedy and need of help.  We'll see if we can get to them.

Broccoli - we just found our first quarter size head of broccoli.  It's good temps for broccoli, so here's hoping!

Melons - on target for late August and early September

Cucumbers - slow to start and in need of some real weeding.

Carrots - the new succession is sprouting for one variety and not at all for the other.  We should get something out of this batch.  We need to talk to Jeff about his current batch to see how they are going.

Lettuce - one batch is a week out.  More are going in today and Wednesday.

Green beans - haven't even hit their stride yet.  This could be a great green bean year for us.  If we can only keep them picked.  Anyone like to do that?

Potatoes - this may sound like a broken record.  We need to get them weeded, so we can run irrigation.  The time is now.  If we get irrigation to them, they should be good.  Prime 'bulking' time is coming up.

Basil - just starting to hit a growth spurt, which shows they took to the transplant fine.

Garlic -due to be dug out this week or next.  We think they should be fine, but a little smaller than some years.

Much Mulch May Mean More Munching

One of the yearly tasks on the farm is the process of putting straw mulch down around the tomato plants.  Mulch is an important part of our tomato growing plan, so it feels good to finally get it done.


In order to lay the mulch, we first need to 'skritch' and weed around the plants.  Certainly a thick enough mulch will suppress many of the smaller weeds, but tougher weeds will potentially grow through it.  It's just better to do a quick weeding first.

Then, we need to lay the drip tape before the mulch.  Typically, we lay the drip tape as close to the stems of the plants on the South side as we are able.  This is important so we know where to put the stakes when we cage the tomato plants.

This matters because we will protect the plants that are showing more strength first rather than spend time trying to "rescue" the weaker ones.  We've learned that this is usually the best approach on our farm to get the most out of our work time and our fields.  Sometimes, you just have to admit that some plants won't make it and aren't worth the time.  So, if we found that we couldn't complete the field, it is better to not complete the area where the plants show that they are weak and may not make it.


This year, we chose to move more tomatoes to the high tunnel and removed one pair of rows from the field.  This allowed us to put some peppers and eggplant into this field.  It's an attempt to 'hedge our bets' in case something happens in one of the field that holds these crops.  See - we do learn as we go.

It has become a tradition that Denis plays an integral role in the tomato mulching and caging process.  One of these days, we may give the story of how we started with straw mulching as compared to how we do it now.  Let's just say that it is much better than it was.
We did, in fact, complete the field.  In addition to these tasks, we got the basil transplanted as well.  It's a good feeling.

We mulch tomatoes for several reasons.
1. mulch keeps weeds down
2. mulch maintains a more consistent moisture level around the plants
3. straw mulch will add organic matter to the soil
4. mulch prevents soil splash onto tomato leaves - many tomato diseases are spread by soil splash onto leaves and the plant
5. mulch makes picking easier for the person that harvests the tomatoes (usually Rob)

Even better, our rotation has been modified to move the garlic so that it gets planted in this field where the basil is.  Basil usually dies off in mid-September.  Garlic gets planted in October/November.  We heavily mulch garlic with straw.  The straw in the tomatoes doesn't break down all the way during the season - so we can pull it from the tomatoes to the garlic in late Fall.  Sounds like a winner to me!


And, finally - we interrupt this regularly scheduled blog post for some day lily flowers.  Thank you for your attention. 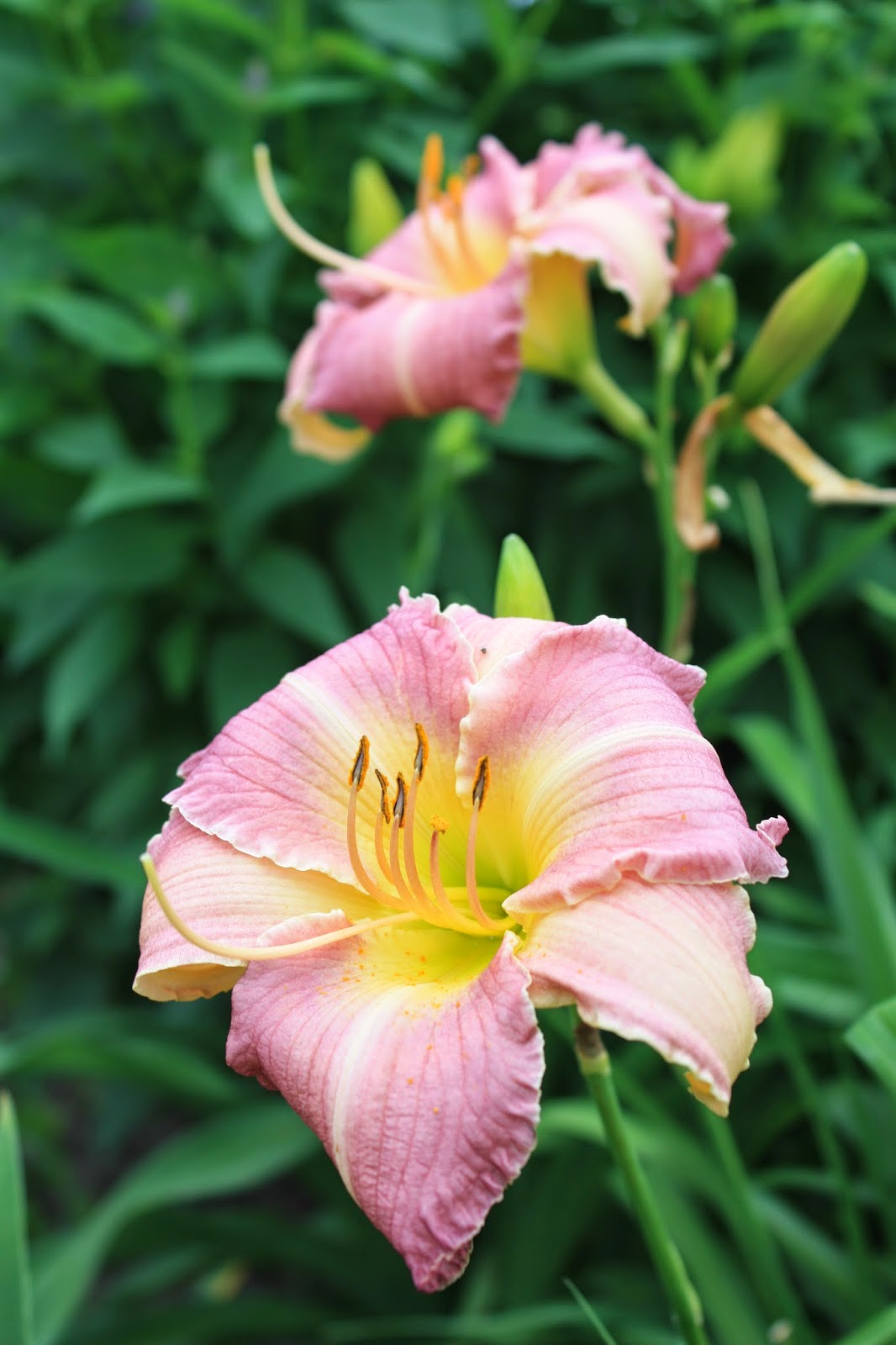 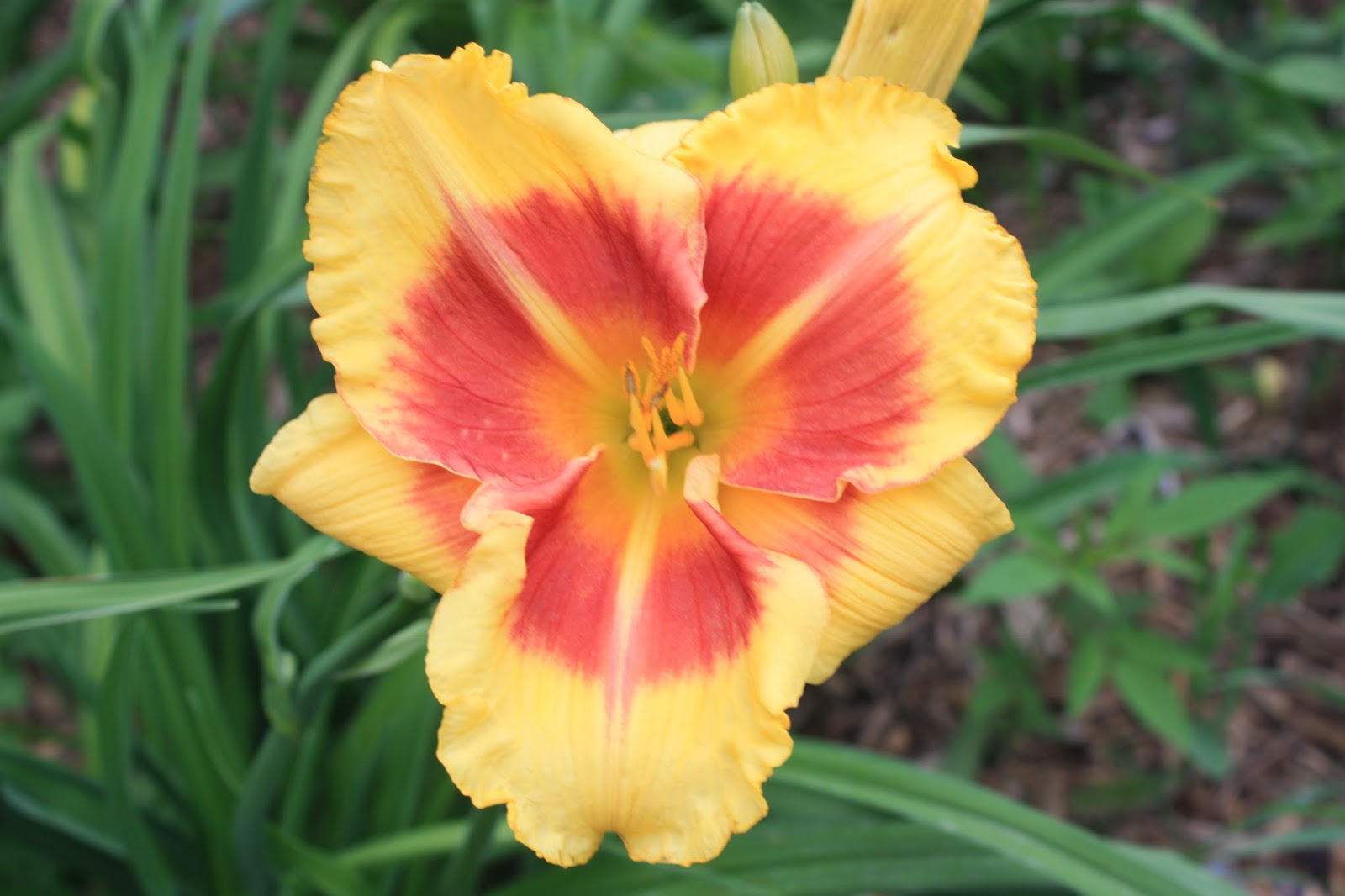 Farmer for Breakfast and other oddities.

The farmer's arms are currently covered in gnat bites - as are his ears and anywhere else those little buggers could reach.  And, to add insult to injury, the skeeters are bellying up to the bar as well.  Monday was particularly miserable.  It was really hard to work through it.  Tuesdays was far better with the wind, but we don't see wind forecast for Wednesday.  We really hope the gnat life cycle completes and the population declines.  If it doesn't there will not be much of us left after a full day in the fields tomorrow.

Tammy was getting tired of seeing partially painted buildings, so she cracked out the paint just prior to the second batch of rain.  It was mostly dry before the rain came and it was under the eaves, so it held up reasonably well.  But, of course, Mrranda had to supervise (that is her job after all).

With it being so wet, we spent more time on "indoor" projects, such as working on building a brooder room for chicks.   The first step was taking down the old ceiling and putting up a new metal ceiling.  This helps us to keep raccoons out of the room.  That, and the old ceiling was pretty disgusting.

The picture above shows the new ceiling.  What you don't really see is the other destruction and removal work we did to prep this area.  At this time, there is a wall framed in on the North end and a frame nearly ready to put up on the South end.
We're anxious to get the straw mulch down in the tomato field, but we'll settle for laying straw in the high tunnel for the tomatoes there.  It sure does look nice.

For some reason, the paper mulch is not holding up like it has in the past.  Sadly, it is now becoming a danger to the plants as it lifts up and either covers them or beats them to death.

Actually, we are pretty sure of the reason(s) and it mostly has to do with the timing of the rain and weather we have been getting.  But, even so, this makes it hard to want to keep using paper mulch when we don't get the benefits we need out of it.  It's even more disappointing because we have had reasonable success in the past.


The fields are drying out in spots so we can get back to work.  The weeds have gotten ahead of us so we're working hard to catch back up.  Our crew of Kieran, Denis and Erik are working hard to help us in that regard.

If anyone would like to spend a couple of hours on the farm as a volunteer, this would be a good time.  Contact us and let us know.
Posted by Rob Faux at 8:35 AM No comments:

We finally got around to taking some of the pictures off of the camera and seeing what was on there.  With a very quick look, we selected a few to share.  Why?  Because we have been terribly delinquent in our posting.  Sorry about that.  But, sometimes, we just don't feel like posting and we don't have any sitting in reserve.  We'll get better, we promise.  After all, we have published over 650 posts on this blog.  I think that shows a little staying power.

We both noticed the color of the sunset through the high tunnel.  The sunset was beautiful without it, but the color modification was really cool.  Tammy was the one with the energy to grab the camera this time.  She took a slew of pictures and this one was the winner of the batch.

We found a neat little trick to help our workers plant with less worry.  All it took was two paint sticks and a saw.  Rather than telling them, plant them this far apart (as we hold our hands out) we can say, "here is a stick, plant them so they are that far apart."  Works great.  We all like it.

Scapes are the flower stalk on garlic plants.  Starting in June, they begin to send up these curly stems that will have a bulb at the top.  The bulb contains seed (also known as pearls) that can also be used in your cooking.  We cut the scapes off of the plants to encourage the plant to focus on developing large heads for the garlic we will harvest in mid-July.  But, the great thing about scapes is that they are also good to eat.

Garlic scapes are considered a delicacy by many and can be used as a garlic 'substitute' in any recipe calling for garlic.  An internet search is bound to find you any number of recipes.  However, we can tell you that we have enjoyed scapes in each of the following ways:

Garlic Scape Pesto
1 bunch tender scapes, cut into pieces, and processed in a food processor until finely chopped
Add the following and process until well blended:
1/3 cup olive oil (add more if you like a thinner pesto)
1/3 cup grated Parmesan cheese
1/3 cup sunflower seeds
optional, toss in some basil for additional pesto flavor if you have it.

This can be served now or frozen for future use. I freeze it in small (1/2 c.) zip-top plastic bags, flattened. Then you can just break off whatever amount you need.


The weeds were taking over Jeff Sage's beans.  So, a crack crew of weeders showed up and let those weeds know who is boss.  Well done crew!  Way to look tough!  Always a pleasure to help our friend Jeff out. As a result, we may be able to have some early green beans between Jeff's rows and ours.