Here it is!  Our 2011 Veg Variety Winners!   We know some of you enjoy this every year, so we feel like we should make sure to get this out there for you!

First off - here are links to prior awards and variety reviews you might find useful:
Drumroll please.......  Ok, you can stop now. 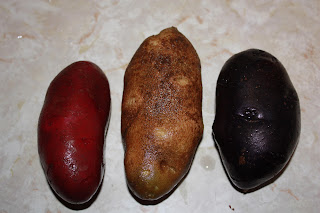 This is a major breakthrough for us because we had decided to drop All Blue from our production list and we were unsure if a blue/purple potato would replace it on our grow list.  The problem with All Blue on our farm is that it produced ALOT of small potatoes that were the color of our soil (approximately).  It was a nightmare to pick, even if people (including ourselves) enjoyed eating them.  Purple Majesty helps to bring more diversity to our potato crop as it is a mid season bulking variety versus early (Yukon Gold) and late (German Butterball, Rio Grande).  The taste is fabulous (better than All Blue), they are far easier to pick as the potatoes stay 'closer to home' and the size is generally larger.  High marks were given for Purple Majesty this year by our CSA members and we agree with them, so we will grow more this season. 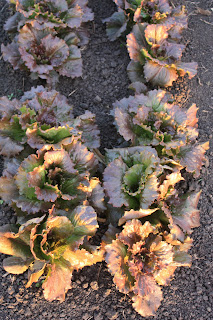 Pablo was #2 in 2009 and just missed in 2010.  It has not disappointed since we added it to our grow list in 2008.  This lettuce is dangerous for dinner planning.  There are many reports of 'nibblers' getting to this lettuce during preparation and finding most or all of it gone before dinner is served.  Pablo is a Batavian type and will form a loose head as it matures.  It can be picked prior to that stage (especially in mid-summer) as a loose leaf.  The only knock on this lettuce is that the transplants can be fragile, easily breaking at the stem.  But, once you get used to it, you can adjust your transplanting methods and they do quite well.


8. Music garlic
Another veg variety with a history on our list.  Music was #2 in 2010.  It drops a bit this year only because we had a more successful growing season in 2011, so it had more competition.  Music is an all around winner for garlic.  We have others we like nearly equally well, but Music wins with the consistency it shows beyond the other garlic varieties. 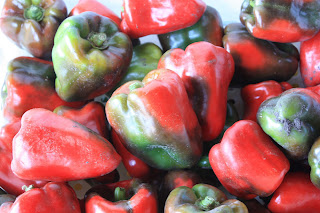 Another new entry to the list, Wisconsin Lakes finally came into its own this season.  If you want a reliable early red bell pepper with very good taste, this is our recommendation.  The three-lobed and thinner fleshed Wisconsin Lakes exceeds most grocery store and hybrid reds in taste (our opinion) and they are not as tough as some of those can be.  These grow well in our fields and not much differently in the high tunnel.  A joy to pick and a fun plant to grow.


6. Redwing onion
And here is a rarity for our lists.  Redwing is an F1 hybrid, and we tend to prefer open pollinated varieties.  The only other F1 to make our lists was Kolibri in 2010.  We still have a half dozen or so storing in our root cellar in January and they look great.  Production was generally consistent for a late season trial in 2011.  Size did have some variation depending on weed control nearby, but that is not uncommon for onions.  We've been hunting for a red onion we like best for a while - and I think we finally have a winner.  But, the best aspect of these onions is the taste.  We find that they sweeten up nicely when cooked.  I wouldn't say no to a nice grass fed beef hamburger on the grill with some Wisconsin colby and a grilled Redwing onion.

5. Misato Rose fall radish
Some people call this type of radish a 'watermelon' radish.  We just call it our pleasant fall surprise.  We added Misato Rose, Nero Tondo (black Spanish) and Miyashage (daikon) to our grow list this year in an effort to provide something new to our CSA members at the end of the season and into our Fall shares.  All of them did well and converted fans.  But, the one with the most converts and with consist growing success was Misato Rose.  We always wonder a little when when we choose something we've grown one year for our top 10.  We can't vouch for consistency just yet.  And, one has to consider the 'newness' factor.  Did we choose this because we didn't know what to expect from it?  Maybe that's part of it.  After all, you don't want a copy paste of the same group from year to year do you?

4. Bronze Arrowhead lettuce
Number 1 in 2010 and second in the lettuce category in 2009 to Pablo and 2008 to Crispmint.  This lettuce is so good we are tempted to remove it from the competition altogether next season.  In fact, Bronze Arrowhead and Pablo may just get put in a 'Perpetual Top 10" list so we can review new things for you each year. 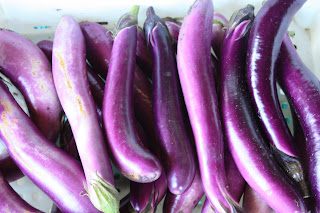 This was the year of the eggplant, with our farm setting records for production this season.  One of the things Tammy remembers about this season was how Rob would drape a pile of 10-12 Pintungs over his forearm as he picked them - before transferring them to a tray.  These are some of the prettiest eggplant you will find.  You need not worry about bitterness, sweating or peeling them.  These plants favor warmer weather and took off after our June hot patch.  We planted 30 plants and harvested 1.5-2 per plant each week for 5 weeks through August and into September.


2. Bloomsdale spinach
You have not tasted *really good* spinach until you have some in March or December.  We've always had trouble having spinach for long in our regular season CSA because it tends to bolt quickly in June.  The reality is that spinach just likes cooler weather.  And, it gets sweeter in colder weather.  Bloomsdale isn't anything new, and it is a fairly common type for growers to use.  But, there are many good reasons for it.  Bloomsdale overwinters well and resists bolting longer than most varieties.  And, last season our extended season CSA members got a fair amount of spinach in their shares.  And, a tribute to this success is the fact that our additional sales of spinach nearly caught up to our additional sales of lettuce.  I am getting tempted to go pick some spinach in the high tunnel as I type this!  There should be enough for one or two salads.

1. Black Valentine green beans
We've been big fans of Provider and Jade green beans for a long time.  And, of course, we still like them very much.  But, we learned from the loss of Benchmark, a green bean we had come to rely on a bit too much.  A seed supply can disappear, so you should make yourself aware of viable options.  Well, it turns out our little experiment with Black Valentine paid off.  The motivation here was that Black Valentine could be a 'dual purpose' bean.  We can pick them as green beans or let them mature and harvest them as dry beans.  It seemed like a good idea - if we can't keep up with the green bean harvest, you don't lose the crop.  We kept up with the crop this year and had some very heavy yields off of these plants.  And, of course, they tasted very good (a necessity if we're going to grow a green bean).  We entered this experiment not expecting much and got something we intend on using regularly from here on out.  Plants had good vigor, showed no tendency towards disease and were great companions with eggplant.  We had two consecutive 'peak picks' off of the same 100 foot row.  Since we planted these as a later succession, we can't yet speak to how long these will go in a season.  But, we're more than willing to see in 2012.
Posted by Rob Faux at 11:32 AM

Email ThisBlogThis!Share to TwitterShare to FacebookShare to Pinterest
Labels: Excuse me sir - you appear to be listing, Just Veg-ing Out