Never a Dull Moment
In a former life, we tilled, planted and fenced our garden in a single, glorious Saturday.  This wasn't a tiny little garden plot - it was actually a fairly serious bit of garden that was perhaps 900 square feet in size.  At least, I believe that's a reasonably serious garden for growing food for only two people.  In our current life, we're planting nearly every week from April to August. 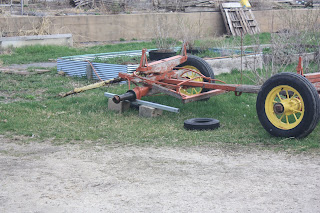 In a previous life, taking a wheel off of an old farm cart would have completely stymied me.  In the current life, I was stuck for a while until I realized that "tight to the right and loose to the left" does not apply to the nut that holds the wheels on the cart shown below.  The real difference, actually, was the fact that I knew this might be the case already and it didn't really take all that long to figure it out.

Ok, I suppose you can have a dull moment if you purposely ignore the things that need to be done on the farm.  But, I don't think that will count.

Read on to so you can learn about some of our most recent exploits!

Weather Wythards
The weather is the weather and there isn't a thing we can do about it.  At least that's what I've been told by Mother Nature.  The end of April snow storm wasn't quite as much as the big event it got hyped up to be - yet we still got some decent snow on the farm.  What was surprising to us was how much we still had at the farm the next day and how little points just ten miles South had.

We also had a serious pooof of wind on April 17.  The weather station read it as 49 mph, but there are some obstructions that might impact the reading from that direction.  The various bits of damage on the farm are consistent with 60 mph or so.  We've got some repairs to make on the high tunnel in the picture below, among other things. 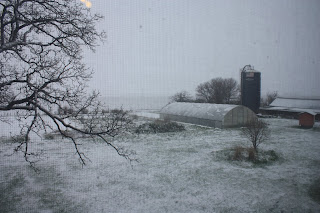 Veggie Variety of the Month - Bronze Arrowhead
We are featuring Bronze Arrowhead lettuce this month because they were the most successful lettuce in our over-Wintering efforts for 2018-2019.  In fact, nearly HALF of these plants survived a particularly tough Winter in the high tunnel and are now reaching peak size and taste.  While it might seem odd to celebrate a loss of about half of the plants put in last November, you have to realize that we planted twelve different varieties and this was the only one with a survival rate anywhere near that mark. 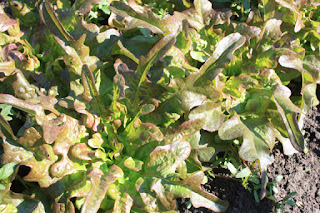 As I said, it was a rough Winter with temps getting down to -29 a few times.  We typically expect some of the plants to fail, but this group was poised for success - looking fabulous as we entered January.  The plants were in the high tunnel and under cover.  They had sufficient soil moisture and they were exactly the size we wanted them to be for over-Wintering.

But, there is a limit to what even these hardy plants can take - but Bronze Arrowhead was the hardiest of them all.

Like many lettuces that have reddish coloring, Bronze Arrowhead features darker and more prevalent reds when grown in colder weather.  The picture above is actually NOT a recent picture and shows you what they look like in warmer weather.  I guess we need to get the farmer to go take a new picture!

Bronze Arrowhead has been in our Veg Variety of the Year posts multiple times and has shown the ability to grow well in all types of weather.  It has a solid lettuce taste that is quite a contrast to bland iceberg lettuce types and works well in salad mixes or on sandwiches.

Song of the Month

I gave up trying to keep track of our "songs of the month" to make sure we weren't putting out duplicates.  After all - those who read this aren't keeping track are you?  If you are - tell me if this is a duplicate!

Duplicate or not, Future of Forestry's Homeward Bound has a beautiful lyric and interesting musical arrangement.  We find it to be a comforting song at a time when it is needed.


CSA Openings Abound - And CSA Phase I has Begun!
We still have plenty of space in our CSA program, so we would welcome new and returning members at any point this month.  We could certainly still add people throughout the season, but we'd really rather start with you on board now!

We have entered Phase I of the CSA season where current members are able to use their CSA "credit dollars" to purchase early season veggies.  Things like lettuce, spinach, rhubarb and yummy asparagus!  Scroll down and look at some of our informational posts on the blog!

We're Trying To Reach You
One of the things that has gotten increasingly difficult over the past five years is making contact with people who are interested in our CSA.  We sometimes get an email that we respond to and then never hear from them again.  Every once in a while, we learn that our attempts to respond go into spam folders - but most of the time, we can't tell if it is indifference or failure of our own responses to get through.

Suffice it to say, we ARE trying to reach you.  Please follow through and help us to help you - thank you!

Farm News and Announcements
There are a whole host of things going on the farm right now - even if the ground is too wet to prep the fields, much less plant in them.  Our house continues to be a construction zone, but we are making progress on the farm house's kitchen.  We are hoping to have the drywall up this weekend - that would be considered a huge accomplishment.

But, the kitchen is not the only 'construction' project going on at the farm.  We're rehabbing what used to be a chicken shelter and then a plant starting building into a new and improved plant starting building.  This version should not require walking bent over at the waist upon entry.  Ya, that was getting really old.... 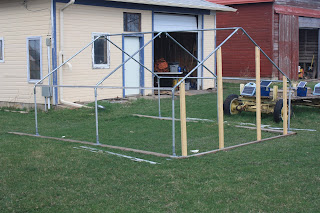 Tammy and Rob have been looking at maintaining honey bees at the farm for several years.  In the past, we've tried to have others house a hive or two at the farm.  The problem with that is that we were often subject to the whims of others when it came to the timing of bee presence on the farm.  This is not to say that it was an all bad thing at all, mind you.  But, Tammy finally took the plunge the rest of the way this year and this will be her 'something new' project for 2019. 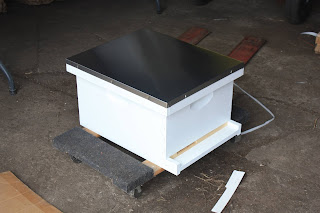 Speaking of experiments (were we?), we also have this interesting plant tower.  It is now constructed and has soil in it.  We got it last season and just never found the time to put it together.  We've been asked about vertical gardening techniques by a few people, so we thought we should try this out so we can give better answers. 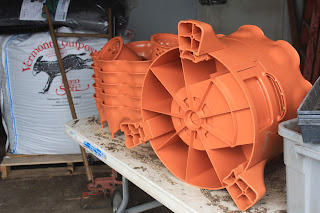 Other recent developments on the farm - in bullet style for those who just realized they've been reading our blog and the boss is coming towards them:
Happy May everyone!
Posted by Rob Faux at 10:13 PM