For those who enjoy these Postal History Sunday posts, I am perfectly happy to answer questions.  In fact, I will often take those questions and queue them up as the topics for future postal history Sundays.  This one actually was prompted by a question - "Do you often get items that still have letters in them?  What would a letter from the 1800s look like?"

The first part of the answer is a large portion of mail from the 1800s, up until about the 1860s, was business correspondence.  If there are contents for items from that period, it is likely to be some sort of receipt or business letter with very little of a personal nature.  Most personal letters were mailed between those who were affluent.  When envelopes and covers were released to the collector market, the families would often opt to maintain control of the contents.  In some cases, they might even sell only on the condition that the addressee (and sometimes the address) be obliterated so it could not be easily read.

All that said - I thought I would share a piece of letter mail that did have a personal letter in it!  This item went from Brussels (Bruxelles), Belgium to Bordeaux, France - December of 1845.

At this point in time, it was common to simply fold up a piece of paper or two and address the outside (keeping letter content on the inside).  Sometimes items were sealed with wax, sometimes they were not. 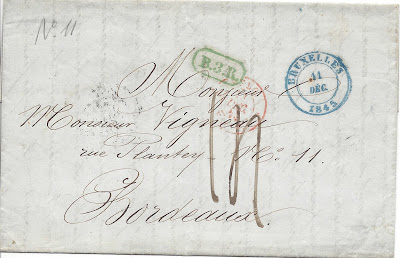 How It Got There

In 1845, railroad development was in its earlier stages for both Belgium and France.  Belgium was looking to create some main lines crossing the country both from North to South and East to West.  France, on the other hand, opted to create a 'star' configuration with nearly all lines starting or terminating in Paris.  At the time this letter was mailed, it is likely it took a train in Belgium to the border.  There may also have been some train carriage to Paris.  At any point in between where a rail line was not ready, this letter was carried in a horse-drawn mail coach.

How Much Did It Cost to Mail?

This letter was sent unpaid from Bruxelles where 14 decimes (140 centimes) were due on delivery for the privilege of receiving this letter.

The postage was comprised of two parts:

On January 10, 1831, the powers of Europe ratified Belgium’s declaration of independence, but the postal agreement operating between France and Belgium was essentially based on the 1828 agreement with the Netherlands of which Belgium had been a part.  There were three distances (rayons) in Belgium with the third rayon requiring the highest rate of 4 decimes.  Remember that "B.3.R" marking?  That stands for "Belgium, 3rd Rayon,"  which helps the postal people to determine how much needed to be charged of the recipient.

French domestic rates were based on distance and weight.  The distance this letter traveled in France would be from the border with Belgium (Valenciennes) to Bordeaux (nearly 800 km).

The internal French postage rate for each 7.5 grams of weight was established in January of 1828 was 1 franc (100 centimes) for internal mail that traveled 750 to 900 km.

This appears to be a letter between brother and sister with the family name Vigneau.  The handwriting is remarkably clean.  However, just like any handwriting that is not known to you, there are spots that I have difficulty deciphering. 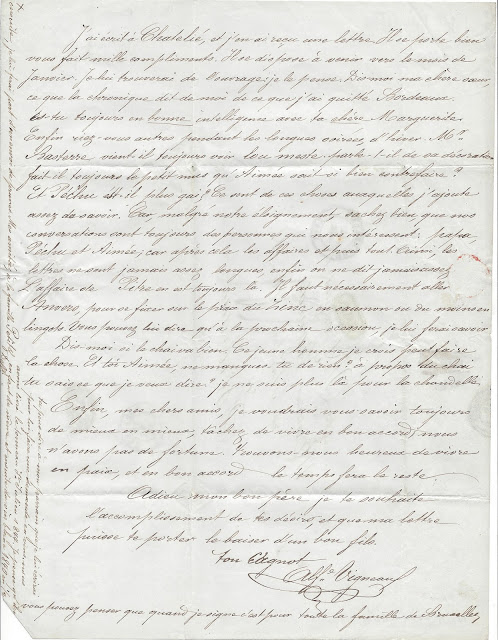 Below is an attempt at translating the first portion of the letter from French to English.  Of course, if someone can do better with the translation, I am happy to hear corrections!  It appears to be largely an attempt to get news and gossip about people the writer knows in Bordeaux.

"I wrote to Chatelie, and received a letter from him. He is doing well and gives you a thousand compliments. He is preparing to come around the month of January. I think I will do the work for him. Tell me, my dear sister, what the chronicle says about me when I left Bordeaux. Are you still on good terms with dear Marguerite? Finally, do you live together taking the long winter evenings?

Does Basterre always come to ?? talk about his decoration does he always make the little ??? that Aimee is counterfeit? And is Pechru more cheerful? These are things I want to have knowledge of...."

It is possible that these people are descendants of Gabriel de Vigneau who established Vigneau de Bommes (Bommes is SSE of Bordeaux) and the estate apparently changed hands in 1834 to Madame de Rayne.  It does make sense that this letter was sent between members of a family with means of some sort and it is possible that some searching could turn up more information.

Wouldn't it be interesting to find copies of the "Chronicle" mentioned in this letter and see if there was discussion of the departure of the writer?   Was Pechru ever cheerful?  And why was Aimee thought to be false?

We will likely never know any of these things ourselves - and yet, it is still fascinating to be transported back to 1845 and witness simple gossip and conversation between siblings.

I hope you all have a great day!  Feel free to ask questions to guide future Postal History Sundays!  I've got one in line for next week (how long did it take for some of these letters to travel from here to there?).  But, I would love to receive some other suggestions.