The following is for those who were curious about some of our production levels for the prior year.
We post this here in the interest of full disclosure to our customers to aid them in deciding if our farm fits their needs for the coming season.  If you see what we produce and at what levels we produce them, you can get a better idea what to expect from us in coming years.  And, it is an exercise for our own planning in 2014 and future years.  The effort of trying to make this something that conveys information to others is one way we can glean useful information for our own use.

We had a bit of a mixed bag in this area in 2013 with the cucumbers doing quite well.  This was true in large part because they are a shorter season crop.  The same could be said for the zucchini and summer squash.  On the other hand, the longer season vine crops such as watermelon, melon and winter squash suffered due to the wet Spring.  Most of these crops were not able to be planted until mid June at the earliest.  We found ourselves throwing many plants we started as the seedlings got too old and the ground didn't dry out.


Eden's Gem and Minnesota Midget produced well enough for the melons to give us something and it was no surprise that they were the producers since they have the shortest days to maturity.  And, Sweet Siberian is the shortest season watermelon we grow.  All but four of the watermelons were this variety in 2013.
The shorter season crops were within tolerable levels, though our per foot numbers on zucchini and summer squash show the shortened period of time we were able to get production from these crops.  We would be happier with summer squash per foot numbers in the 3's and zucchini in the high 2's.

The good thing about greens is that their short turn around time allows us to keep planting and hopefully get a crop on one end or the other of a season.  If one batch dies due to weather extremes, we just plant another batch. 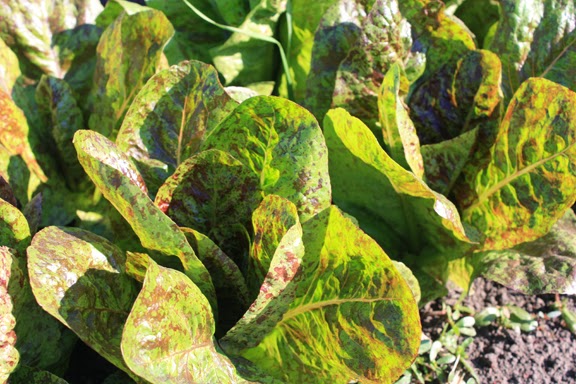 Some of our early harvest numbers are missing, so there is some upward adjustment for a couple of crops here.  Overall, these are perfectly acceptable numbers.  We can always make some adjustment on timing, but all in all, this is fine.  We lost some of our early field plantings and our latest plantings didn't quite get to where they needed to be when the sun failed to shine for much of the Fall.  We'd like to bring the spinach and chard up a tick or two.  Lettuce is most easily sold of all of our greens excess, so we are fine with higher number there.

Brassica crops include broccoli, cauliflower, brussels, cabbage and other like crops.  Again, we had some issues with getting earlier successions in on time and that rolled over into some of the later plantings.

These are very good numbers, especially if you consider that a couple of varieties of cauliflower, romanesco and broccoli failed to produce at all.  The chinese cabbage and pok choi were most reliable, but also had the advantage of shorter seasons to production.  The broccoli was average and has been better in the past, but we were pretty happy with the taste.  Romanesco was a nice addition that we look forward to seeing more of this season.  For 2014, we hope to bring up cauliflower, broccoli and romanesco production and perhaps slightly curb the pok choi/chinese cabbage combination.  At the least, we hope the season will let us spread out that production a bit more.

We knew the Brussels wouldn't go anywhere by the time we were able to get them in the ground.  But, we tried anyway.  We also lost two successions of cabbage, but persisted in getting one to go.  The chinese cabbage helped pick up that slack.

Tomatoes, potatoes, peppers and eggplant all fall into the same family.  As with most things, these were impacted by the wet Spring and other weather/environmental concerns.  In particular, our field peppers and eggplant were devastated, leaving us largely with four eggplant in the high tunnel and a few rows of peppers in the high tunnel.  Happily, the high tunnel peppers performed valiantly.  But, there isn't much four plants could do to alleviate the eggplant failure in the field.
Potatoes: 858.8#
Tomatoes (High Tunnel): 580#
Tomatoes (Field) : 2994#
Eggplant : 68 (46 high tunnel)
Peppers (High Tunnel): 1960

Some experience with the high tunnel paid off for us in 2013.  We've posted on the topic before, so there is no need to belabor the point.  But, with the very slow start to the season, our field tomato numbers were lower than they should be.  Plant health indicated that if we could have had the time to mature all of the tomatoes would have landed us around 5000 pounds in the field.  High tunnel pepper production was a wonderful boost.  And, we were glad Tyler grew early potatoes to supplement our late potatoes.  In both cases, production was low.  But, we got something.  And, that simply had to be enough.

Root crops are yet another mixed bag.  We won't discuss Jeff Sage's beet, parsnip and carrot production here since he is the keeper of those numbers.

The carrots were a wonderful bonus last season.  We managed to find that tiny window in May where the soil could be worked and got our carrots into the ground.  Our second batch of turnips hit that as well, but we were never able to get them thinned, so production was limited somewhat by that.  We had some radish in the spring and fall, but didn't feel like we had a particularly good set of plantings there, with three successions failing for one reason or another.  Happily, our garlic did reasonably well, with the Blue Gate Farm seed producing all of our crop.  We've saved enough seed for next year to hopefully get back to our 3000 head harvest levels we plan to get each season.

Scapes, while not exactly a root crop, fall into this category because it is the garlic plant that produces them.  We had a reasonable crop of these as well and felt that the quality was good.

We weren't horribly upset by the beet crop failure since it is an intentional redundancy with Jeff Sage's production.  It was sad because we grow the Chioggias and the Golden beets while Jeff concentrates on the red beets.  Onions were picked up by Tyler.  This one, however, is much sadder since we had such wonderful seedlings that never had a chance to get into the ground before they 'aged out.'  We still put some in, but knew the whole time that it was simply too late for them to do anything.  At least they afforded us the chance to work with the new flex tine harrow.

We sound like a broken record by now.  Many of our legume crops failed due to the wet start to the season.  But, our diversity of variety, planting times and locations provided for reasonable harvests in 2013 despite everything.

Life intervened and prevented a dry bean harvest in 2013, but we didn't feel like we were missing terribly much for most of those crops.  In the end, we figure they become a reasonable crop for tilling in and providing a little nitrogen.  Most of the bean crop came from two double rows in the high tunnel.  We're not entirely sure how we would have come up with the labor hours to pick all of the green beans if the rest had produced at any level.  But, it would have been nice to have had that problem.  Despite the loss of 25% of the peas due to a bad seed batch, we are pleased with the pea harvest for last year, on variety even made our top 10 for 2013.  Again, the planting hit that tiny window along with the carrots.  It is really too bad we couldn't have gotten everything in during that 24 hour period.  But, that's wishful thinking.

Then, there are other crops we grow but always have a hard time figuring out where to group them when we do things like this....

Basil: 1686 stems
Asparagus: 56.6#  (this number is off, a page of recording is missing that has this and some greens harvested...)
And some nice pickings of rosemary, oregano and tarragon.

The basil crop was a nice little surprise.  They went in late (of course), but had had some warmer weather they really liked and they really took off.  We could have done a bit more of them if we'd had the time.  The asparagus was good enough, but not all that impressive with the cool start to the season.  We keep waiting for this crop to really bust out.  But, it just keeps plugging along.  We'll be fine with that.  We just need to stop looking for the big win and be happy with the consistent trickle.