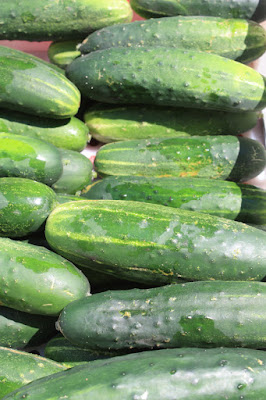 This is a heritage variety from 1928.

What's a "heritage" variety and how is it different form an "heirloom" variety?  Good question!
In short, a heritage variety was developed by a seed company rather than a variety that was passed down from generation to generation in a family.  Heritage vegetables are still an important part of our gardening history.  And, as open pollinated varieties, can be maintained privately as well as commercially.

Back to your regularly scheduled post!
Fruits for this cucumber can be picked from 4 inch to 8 inch size, but plants slow production if too many are allowed to grow to the larger size. This cucumber is a strange case, having been introduced to our farm in 2005 and removed, then reintroduced in 2012. The results in 2012 showed us that this was an excellent later season cucumber, which was not something we were looking for in 2005. Our second succession fared far better than the first, so we are happy to keep this variety in the fold. We ran it in 2014 with both early and late successions just as a test to see if what we think we are observing holds true. But, since our first succession of cucumbers did poorly for all varieties, it was hardly a fair trial.

Fruit tend to have a bit of a 'star burst' on the flower end.

You will not see A & C Pickling in larger commercial operations anymore because the consistency in size and shape does not match some of the modern hybrids. This is not to say that there isn't good quality here, it is just a realization that bulk markets typically want fruit that meet very specific size and shape profiles (often disregarding taste). Speaking of taste, these consistently have a good quality. The skin may get bitter if you leave them on the vine too long. Otherwise, they don't need to be 'peeled'.


Refrigerator Pickles – Fast and Easy!
6 c. sliced cucumbers
1 T salt
1 onion, chopped
1 small/medium green pepper
1 c. sugar
1 c. vinegar
Mix salt and cucumbers. Let sit for 15 minutes. Add rest of ingredients. Stir to mix. Let sit overnight in the refrigerator, covered. The pickles will look too dry at first. Don’t fear – they will have plenty of liquid by the next day.
Store, covered, in the refrigerator for up to 2 weeks.
S Zenk
Posted by Rob Faux at 4:30 AM