We continue our series of Culinary Corner blog posts by Elizabeth Hinds with a useful tutorial for working with a whole chicken.  It is interesting to read Elizabeth's approach and compare it to our own.  Typically, Tammy will put the whole bird into a crock pot and then pull the meat off the bones after it is cooked.  We have gotten as many as 10 meals out of one bird, if you count soup from the chicken stock we make.

Regardless of what you adopt for your approach, it is clear that a whole bird is not all that difficult to handle - and you can get several meals out of one bird.  For those who have interest, we do have more birds available from our Spring batch and the Summer batch will be ready in about 9 weeks. Please contact us.

As I unwrapped my bird from the Genuine Faux Farm, one thing was very clear: this was one strong bird. The legs and wings in particular were massive (I can only assume from chasing the other chickens around and running away from friendly farm hands bringing water).

Sometimes I like to roast chickens whole, but more often than not, I end up cutting it up into its component parts to get a whopping four meals for two people out of one bird. When you completely cut up a whole bird you’re left with a lot of parts:

Trying to cut up a whole raw bird can be intimidating at first, but with clear instruction and a few tools, it’s actually quite easy and very rewarding. You need only four things: a plastic cutting board, the sharpest boning knife you can find, a baking tray to organize the parts as you cut them, and of course, a chicken.

Step 1: Remove the wishbone.
This can be a little tough with the GFF birds; in addition to strong muscles, these guys have strong connective tissue holding it all together. The wishbone does not HAVE to be removed, but if you don’t take it out before you start carving, its presence will block key access to parts of the breast meat.

Step 2: Remove the legs
Rather than starting right in on the breasts, it’s easiest to get the legs out of the way first. To remove the whole thigh, slice into the skin stretched across the leg and chest to expose the joints. 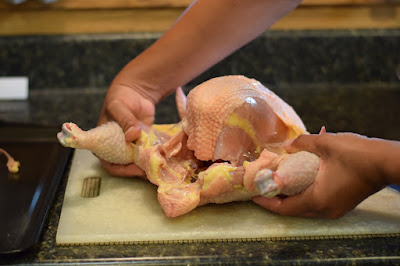 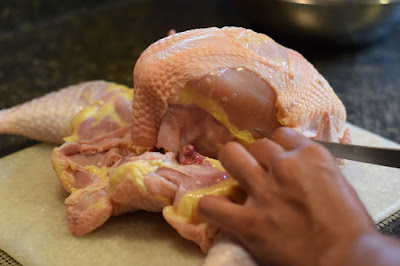 Before you can cut the legs clean off, you’ll need to release the meat attached to the tailbone.  There are a set of bones that run along either side of the tail; this is sometimes broken if tail feathers are tough to get out. To separate meat from bone, lay the knife flat against the bone as you slice in toward the tail. Repeat this cut on the other side to complete a V shape and leave the tail free. 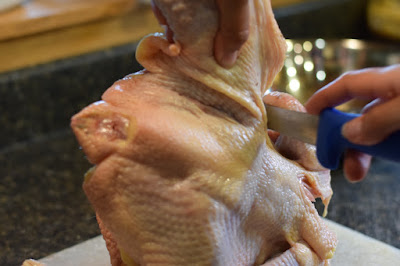 Cut in towards the body until you reach the backbone, then angle your knife so you’re cutting towards the tail and begin the careful and deliberate march back. The arrows in the picture above point to what’s known as the “oyster” of the chicken and it is very tender meat that you should try to cut out with the thigh. They bulge out on the back near the tail, and you should scoop around it with your knife as you move toward the tail.

Once you’ve cut around the oyster, continue the cut and navigate around the popped joint to cut the leg off completely. 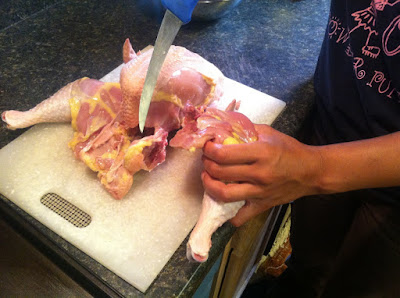 Step 3: Remove the breasts with wings
Place the bird breast side up and run your finger along the spine of the breast bone. This is where you’ll make your first cut. 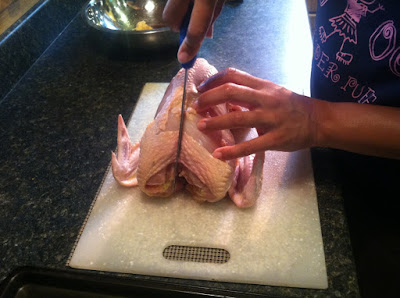 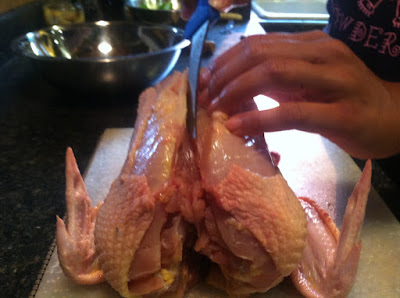 Begin to cut away the breast by laying the blade of your knife flat against the breast plate and making long slices. Alternate slicing with the knife and using your fingertips to gently pull away meat and give you a better view of where you’re cutting, Angle your knife slightly toward the breastbone as you cut so no meat is left behind.


As you did with the thighs, pop the joint out of its socket to give yourself a clear view. Holding the bird up by the breast, cut through the exposed joint to separate the breast from the body. 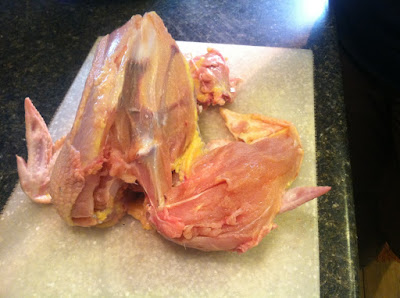 Now that it’s off the body, the wing itself is very easy to remove. Just edge your knife up against the joint and slice it right off. 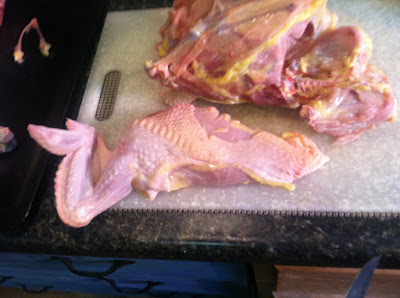 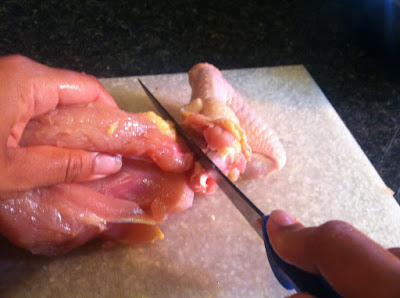 Now personally, I prefer to leave the skin on the breast for cooking. When you sear it in a pan, the skin acts as a protective barrier that moderates the heat and keeps it from getting too tough as it cooks, but it’s also an incredibly flavorful crispy treat. As for the wings, I save them up in the freezer until I have enough for a good sized appetizer. My favorite method for chicken wings is a good spice rub, then cook them low and slow in the crockpot. 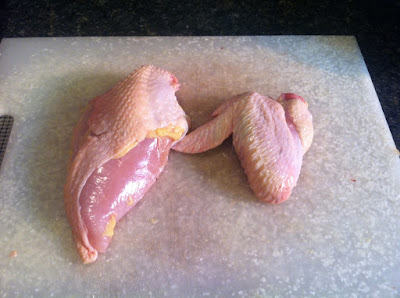