August is, oddly enough, one of our favorites on the farm on many levels.  But, the biggest positive has to do with the number of annual flowers that put on their best clothes during the month. 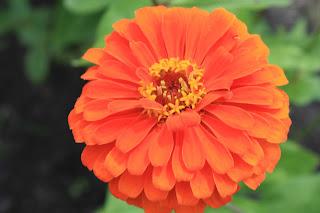 We try to plant more zinnias every year, but it never seems like we put as many in as we really wanted.  Perhaps we're just greedy?  This year, we've actually put plantings in throughout the season.  Why?  Well, it's not really a succession thing.  It has more to do with not giving up. 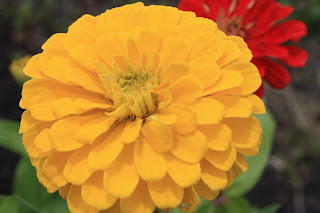 The flowers you see here were both in the planting in our tomato field.  This one went in on time and germinated well.  It also got weeded!  Needless to say, it is successful and very enjoyable to see.  There is another planting of zinnias in another plot that went in much later, but we expect them to start blooming at the tail end of August.  We might have preferred to have put them in earlier, but life didn't allow it.  Instead of accepting that we didn't get the zinnias in at the planned on time, we planted them anyway.  The plants look healthy and are rapidly growing now.  Maybe we should make this a succession thing? 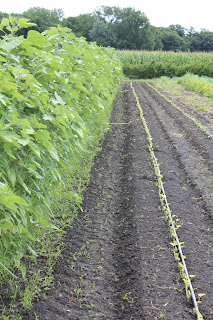 We have a nice hedge of sunflowers in another vegetable crop.  In fact, this plot is adjacent to the plot with the nice zinnia planting, so the path between the two is going to be wonderful to walk.

This hedge started blooming a week or so ago.  And, just to the south is our last succession of summer squash and zucchini.  They look awfully small when you compare them to their lofty neighbors.

Sunflowers attract larger bumblebees and small birds along with some butterflies.  On Tuesday, Rob observed Mrs Bunting and offspring and some Eastern Goldfinches in the sunflower hedge.

We're not entirely sure if the sunflowers will do much to attract pollinators for our squash plants, though we are certain they won't hurt in that endeavor.  Perhaps the biggest thing is that the sunflower hedge provides a fence of a sort.  We'd been having deer traffic through this area that has since been diverted by this planting.  Happily, deer are more easily diverted on our farm than they might be for people living closer to a metropolitan area.  That doesn't mean we don't have to do other things to protect our crops - but the sunflowers do play a part in the whole strategy.  Think of it as a part of our IPM (Integrated Pest Management).

So, what could possibly go wrong with using sunflowers as a hedge next to another crop?  Well, you do need to consider the competition for water and nutrients.  You don't want the sunflowers to steal away what the squash plants need.  So, we've been fairly careful with spacing.  Our crops are to the South of the sunflowers, so our squash plants should get plenty of sun.  The only issues we can think of include the possibility that we would attract birds and other critters that cause problems with our crop OR a strong North wind could lay all of the sunflowers down.  They are tall enough that they would reach that first row of summer squash. 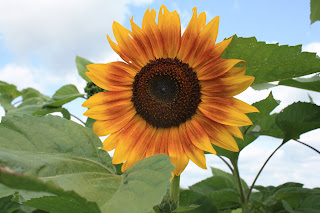 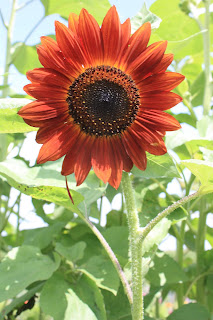 But, it's pretty hard not to like the beautiful flowers that show up and survey the goings-on of our farm.  The birds like them and they don't really care much for the squash, so we aren't seeing much of a problem there either.  But, the real winner is the fact that it is VERY difficult to frown and think negative thoughts when you look at them.

When you choose to run the type of farm we run, it can be pretty easy to get overwhelmed.  It isn't all that hard to be disappointed in things that don't go exactly as you wanted them - and there are soooo many opportunities for things to go awry that it's actually a bit of a surprise when something does go EXACTLY as you planned.  It doesn't necessarily help that we set the bar pretty high - and then raise it every season.

The solution?  Plant more sunflowers.  Plant more zinnias.  And smile a bit more often as you look at them.