Once again, you may have noticed a gap between blog postings and/or other electronic "hey remember our farm still exists" type of posts.  This is just a reminder to us that we both wear many hats (even though it seems to everyone that Rob only wears the one hat ALL OF THE TIME) and sometimes you have to hang one up for a while in order to get things done.

Then, there are other hats you really WANT to be wearing, but you can't.  Below is a picture that has been seen far less than we want by this point in the growing season. 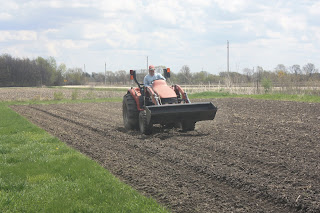 You are witnessing a rare photo for the 2019 season - one with the farmer on the tractor actually do some field work.  And, actually, in a way, this wasn't much for field work.  We had a very short period of time where we thought the soil might tolerate a little work even though it was wet just below the surface.  This field had already had the power harrow run on it in April (well before the soil was warm enough to plant). We did that in hopes that it would help it dry out a bit quicker for May planting.

Did it work?  Well, sort of - but we have so much soil moisture after an all-time record for precipitation from May 2018 to May 2019 that there really isn't much we have been able to do to combat the problem.

What you see above is our method for marking our planting beds in a field.  We use the tractor to mark beds that are the width of the tractor.  When we cultivate with tractor implements, we just make sure to drive in these wheel tracks. 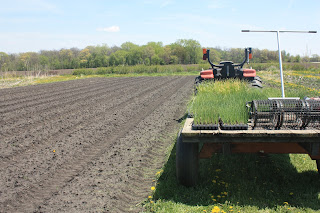 After marking the beds, we used Barty (our walk-behind tractor with the rototiller) to soften the planting space with a single pass.  Then, we dashed back with trays of onions and put them in these beds.  We got two beds in (about 3500 onions) before we ran out of time (it rained).  Thus far, we have five beds of onions in and two remaining that we want to plant.  We don't want to plant any onions after June 1 and we'll toss anything we have left after June 5 because they won't turn into much of anything.

We are now up to four poultry flocks on the farm and will likely peak at six flocks this year.  The henlets are residing the nice, "shed on wheels" that will serve as their home until they are ready to be integrated with the main laying flock. 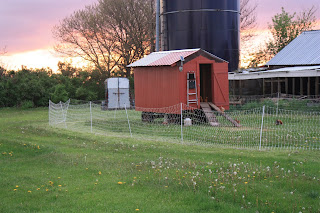 With all of the wet weather we've been having we are finding ourselves pressing parts of the farm into service as pasture that we haven't intended on using.  But, we have to find places that aren't giant puddles so the birds have a place to run around and be... well... birds.  That, and we need to allow some of normal pasture areas a chance to recover - assuming conditions dry out enough to allow it. 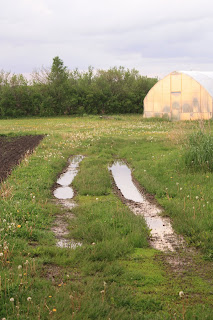 We haven't taken many pictures of late because we are tired of taking pictures that remind us that everything is damp.  Actually, our rainfall at the farm for May has been about an inch above normal, but not so far out of the norm for Spring.  It's the cumulative effect of MONTHS of precip at above average levels that has caught up to us.  The soil starts to dry out at the top inch, but anything below that has consistently been mud (with a short break of mostly workable soil in the 3rd week of April or so).
So, you might ask - "what are you doing with yourselves, since you aren't doing the field work you usually do?"

Go ahead!  We know you want to!  Ok.  We'll ask for you.  What do we do with ourselves since we aren't doing the normal field work?

We keep trying to find places to put plants so they stay safe AND can get watered and fertilized until we can put them in the ground.  Sadly, one of those places that has had a history of being safe (Valhalla, the high tunnel building) was invaded by woodchucks not once, but twice.  We lost all of our broccoli, cauliflower, kale, cabbage, chard, early melons and a few other things in a very short foray or two by those varmints.  That means we have had to reseed a couple thousand plants AND create a new location to protect those plants until conditions are right to plant them.

Thus we now have the building we are calling Casa Verde (CV for short).  Now that it is in functioning order, we're working on shoring up Valhalla so we can put some crops into that to make up for some of those not in the ground elsewhere. 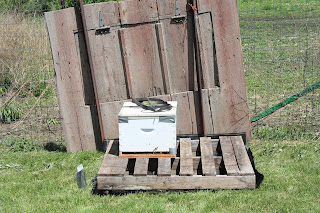 You can probably guess that we simplify things a bit on our blog - because there have been plenty of other things going on at the farm to keep us busy.  Per the norm, there has been no lack of stuff to be doing.  The farmhouse kitchen slowly progresses.  Being an old farmhouse, we keep discovering more things that need addressing to actually finish the job.  If you have seen the movie titled the Money Pit, you have some idea of how it feels at times.  Our VAPs (Very Ambitious Plans) for each day are usually far too long to hope to complete them - and yet they always have a host of checkmarks at the end of the day.  It just gets difficult running full days of checkmark worthy tasks without running out of steam every once in a while - especially when weather conditions and worry about getting crops in and getting the CSA filled and and and...  Typical wear and tear for a season, but magnified by extraordinary weather conditions.

So, we added some workers to the farm this past weekend.  There are now TWO queens on the farm.  Queen Boss Tammy and the Queen Bee.  The Queen Bee brings thousands of workers with her that will be around to pollinate the crops that will theoretically go in the ground at our farm this year.  In the past, we have hosted hives cared for by others and we always work to support native pollinators.  This year, Tammy is trying her hand at beekeeping.  This is not a honey operation, it's a pollination operation.  They've only been here a few days, but one has already landed on Rob's hat and inspected him.  Apparently Rob or the hat passed inspection.

We're guessing it was the hat.
Posted by Rob Faux at 2:56 PM