Catch Us Catching Up?

We actually have a significant number of posts and post ideas sitting in the pipeline, but no time to follow up on them.  The simplest post is always the 'what's going on at the farm' type of post where we share a few photos and a few words - so that's what you're going to get!  We hope you enjoy us catching you up with the process of our catching up.  Now, here's hoping we actually catch up. 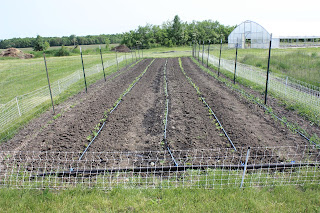 Recent conditions in our Middle Earth plot can summarize for you some of the reasons we are in the 'catch up' mode.  If you look carefully at the photo, you'll see a wet spot to the the left of the center row.  We planted cucumbers to go with the peas and borage in this plot.  The ground was a bit wet to be working, but we had to get something in, so we worked it anyway.  Well, the seedlings had wet soil to start, but that top couple of inches clumped up and dried up after a couple of days.  The cucumbers needed water - but it didn't take much to hit the water table and then there was too much water.

We're walking a fine line with transplants because we DO have to give them some water to keep them alive.  But, even a little too much puts them in TOO MUCH water, which also stresses them.

The good news is that we were able to proclaim several of our plots as ready to work on Friday.  That means we were able to bring out some of the 'toys' to do some work! 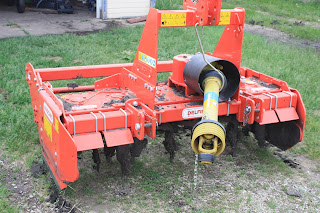 Vince is our rotary harrow and he does the initial prep of our planting beds.  He does a fine job of ripping out the weeds in the beds and loosening things up so we can plant.  It's a tool you don't want to over-use, but it sure does help us get more done in shorter windows of time.

We had a short period in April (I think it was April) that were able to get Vince out to do a little work, but that's been it.  So, on Friday, Vince came out and prepped plots for winter squash and melons.  The field for tomatoes and peppers was deemed a bit too wet still, but it should be ok for Sunday or Monday - as long as the Sunday rain chances don't hit us too hard.

The other difficulty with planting waiting until June?  Well, the things that are in the ground (onions, potatoes, peas, turnips, carrots, beets) all need to be weeded. 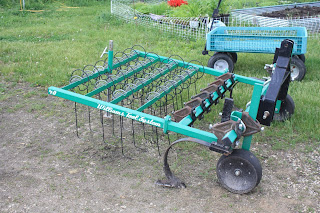 The flex tine weeder was brought out to try to clean out the onions and the potatoes.  For the most part it - it worked.  But, there were still areas that had crab grass that was too far along to be removed by this tool.

Thankfully, we had a great crew of four that were willing to run the potatoes and the onions and clean them up the rest of the way on Friday after the flex tine cultivation on Thursday.  We also had good help from Emma on Wednesday (or was it thursday?) getting the beets and carrots weeded.  We even planted a few flowers not far away so the farmers and workers can enjoy them. 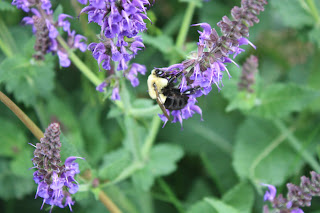 We're seeing more bumble bee activity on the farm right now as the perennial salvia are blooming.  We particularly like the May Night cultivar as it seems to have a longer bloom and the bees do like them.  And, unlike so many of our other perennial plants, they appear to be on schedule this year.  Early to mid-June is a period of time when flowers of this type aren't as plentiful, so we're happy to have them on our farm for the pollinators that favor them.

I think we would enjoy more of these perennials, but we just can't keep our perennial beds weeded.  It's a problem that we have simply because we do so much field work - it's hard to go out and weed a perennial bed after ward.  Instead, we look at the perennial beds and feel a bit depressed.  Until you see a bumble bee happily bumbling about on a salvia. 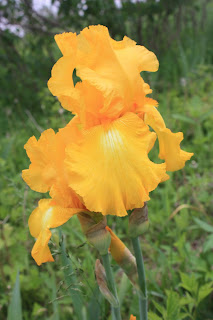 Since we are still speaking of flowers, the iris show continues after a late start.  We've enjoyed cut flower vases in the house and we've made sure to stop and take a sniff or enjoy the view on a semi-regular basis as we walk about the farm.

We have to admit that bearded iris don't really do much for pollinators and we rarely see them visited by much other than an occasional hummingbird.  But, we do like them and they help us feel like going out and doing more of what we do.  That seems like a good enough reason to have them. 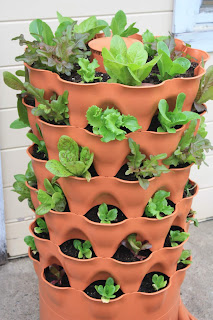 The lettuce tower experiment continues.  While this is the most recent picture, it is really not representative of what is going on with it right now.  The top couple of tiers are quite larger and the tiers further down are stalled.  We had some suspicions about this when we started and we're seeing some of it confirmed.

Certainly some of the issue is likely user error.  But, there are some logistics regarding the lower slots that had us wondering in the first place.

Meanwhile...
Trays of plants wait for us to be able to put them in the ground.  Here are some melons.  Can you see them clamoring to be put into their field?  It is odd to see melons clamoring.  But, there you have it. 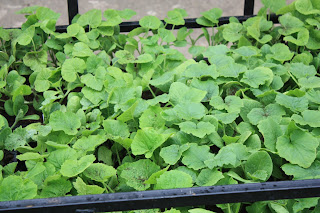 The plus side of fields being wet, I suppose, is that you can get other tasks done that need doing - assuming it is not also too wet to do those things as well.  We pulled a batch of cattle and hog panels out of bush line areas where they had been 'temporarily' stored.   They are now in a better 'storage' location until they get pressed into service later this year. 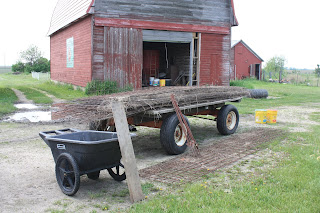 And, while some of this is happening when the weather is nicer, it is happening because we NEED it to happen.  The farm kitchen continues to progress slowly, but steadily.  The sheetrock is going up!  Actually, this picture is also dated already since we only have a couple sheets left to put up now.  The entire area shown below is now completed. 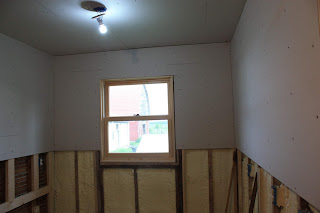 And, Valhalla continues to do its job for us.  With the help of an electric fence surrounding its perimeter.  If Mr. Dread Pirate Chucky Woodchuck McChuckster tries to get in, he'll get permanent curls in his fur. 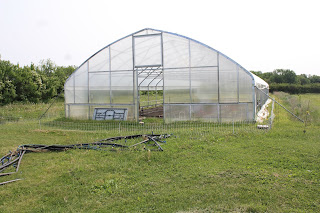 No, it won't kill him - but we'll be happy if he has a really good scare and decides to leave our veggies alone.
Posted by Rob Faux at 10:04 PM