The surveys are in and we have had additional time to research other outlets for product and lay out or initial farm plans for 2020.  There is still much more for us to figure out and plenty to share as we set up our 2020 growing season.  This post will focus on two things.

We Will Grow Food For You in 2020
We intend to raise veggies, poultry and some flowers in 2020.  Our products will be made available to you using pre-purchased credits.  Consider it a flexible CSA share that easily works around your travel schedule and allows you to spend your money on any of our products in whatever volume suits you.  We will flesh this out in future posts.


Our First Draft of Our 2020 Grow List
We have our first draft of the crops we intend to grow in 2020 and here they are! 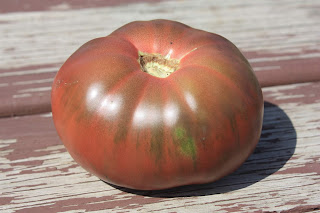 Tier One - Yes, we're growing these!
When we put our survey out, we had already selected crops that we felt would be a sound basis for the 2020 season.  We selected these for several reasons.  In general, these are crops that typically either grow very well on our farm, are easy for us to sell and/or are crops we really enjoy raising.  In other words, if our situation forced us to grow only these vegetables, we think we could do fine. 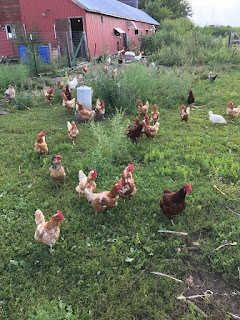 We can talk about these more in a later post, but suffice it to say, this list has not changed, though the amounts of each are yet to be determined.  We do intend to grow a sizable amount of onions, lettuce, squash and tomatoes.  There will be varying amounts of the others.  Our broccoli and cauliflower, while they grow very well for us, will be cut down to about 40% of last year's plans to line up with the demand levels we are experiencing.  But, it seems wrong to give up on a crop that likes our farm and soil as much as they do.

Tier Two - We'll grow some of these.
Before I go too far here, we would like to remind all of you, but especially those of you who participated in the survey, that this is NOT a democracy.  It was a chance for you to convince us to change our minds and some of your voting did, in fact, influence us.  But, even if there was relatively strong voting for a particular crop, we may not have found it to be convincing enough to keep it on the grow list.  We are, of course, sorry if you are unhappy with these choices.  I suppose I could tell you we are growing them and then just inform you there was a crop failure later?  No?  Ok, let's take the high road here and unveil those that made the cut and those that did not.

1. We're good at these AND people want them 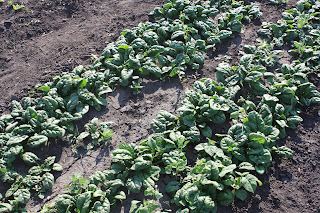 Spinach and peas were in question because they can be labor intensive with the harvest.  But, we are pretty good at growing these AND people seem to select them when we have them.  By reducing some of the other crops from our grow list, we should be able to absorb the additional labor to do these well.  Snap peas were separate from snow peas and received a slightly lower vote count.  We have space in our growing plan for one - snow peas it is.

Cucumbers are a special case.  They usually grow very well for us.  The problem has been finding homes for all of the cucumbers AND keeping them picked is also labor intensive.  Frost rarely kills these plants - it's the fact that we can't keep them picked, so they terminate with fruit that has gone to seed before the frost has a chance.  We also received feedback that we might be able to have a bit more of an outlet for our cucumbers beyond CSA members, that helps it get to the grow list.

Beets?  Well, there were some who wanted gold, some who wanted striped and some who wanted red.  We'll grow some beets because they help balance out our crop rotation and they can be stored.  A crop that stores allows us to take a lower demand and spread it out over time.  They are easier to clean than many root crops as well, so it suits our needs.

The white fleshed potatoes have not been as happy with us since Rio Grande disappeared and became unavailable.  Again, we gain something by removing an item with insufficient support to encourage us to take on the struggle.  Maybe sometime in the future they could return.


3. We'll have that because there are other reasons to grow it

The herbs fall into the same boat and many of them are perennial plants that are already established.  We'll have them.  What we should do, it seems, is offer them to people a bit more often.  Maybe it will work better to offer them and the people who love them can get all they want through the new program.  It's a different ballgame than when we felt we had to have a bundle for every share (not knowing who really wanted them and who knew what to do with them). 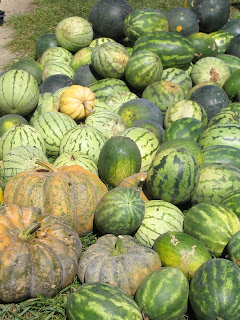 4. We want to grow a few and if there are extra, you can have some

*****IN - ish, OUT - ish*****
These are probably mostly *OUT* for all intents and purposes.  If we have space and inclination, we'll plant some.  If time is short and something has to go, these will go or we will only plant enough plants to satisfy our own needs.  Most likely to survive in that instance are the Romano beans and the Papricka peppers. 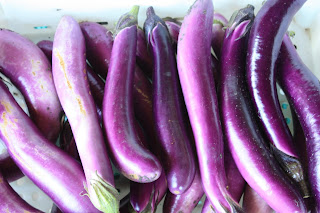 The Minnesota Midget melons from the high tunnel are consistently good producers and they rarely go begging for attention, but the days of growing an additional 800=1600 row feet of melons are over.  We'll grow a few of our favorite field varieties in the field and share as they are available.  Summer squash have some other demand other than individuals in the CSA, but we don't see a reason to be pushing quite so many of them at people.   Komatsuna stays because it provides an opportunity for something green when there is very little else, but we won't push its season outside of that window as we have in the past.

Eggplant are an odd case.  Those who love them want a nice batch of them on a semi-regular basis.  It's not so hard to put 30 plants in the ground to cover that demand.  We also have heard that the longer "pintung' style eggplants are favored, so we will drop the larger Italian style purple eggplant from the grow list and stick with the variety people have said they prefer.

Then, there are the Napa cabbages (Chinese cabbage/Korean cabbage, etc).  They grow fairly well for us and they store for a long time in the cooler.  When you consider there is a devoted group of people who want Napas, you have to consider keeping them in.  In fact, this might be one crop that will increase over the past year's production numbers, but they are unlikely to reach the heights of three to four years ago.

Tier Three - Chopping Block List
We presented this list as those items we were inclined to drop unless we were swayed otherwise.  Items appeared here for various reasons including the possibility that our farm is not all that good at growing them.  Another option is that we felt as if the labor demanded for the crop in question was more than we could expend unless demand were much higher.

********************OUT**********************
We weren't overwhelmed by the responses here, so we aren't growing them next season.  For our production system, Brussels are a bit of a pain.  Not only that, when we did grow them, we were left with an awful lot that did not go to homes.  We can't eat that much Brussels sprouts.  Delicatas seem like we could grow them, except they just don't produce well enough for the space they take.  If the response were higher, we would investigate a way to improve production by trialing cultivars to see which ones like us the most.  But, it wasn't.  So, we won't! 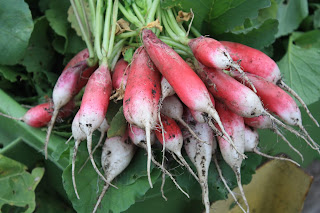 None of these even came close enough to make us consider changing our minds.  Our apologies to those who did select them.  But, here is the interesting thing - EVERY veggie listed got at LEAST one vote.  The other interesting thing?  We HAVE grown every item on this list at some point during our career.  Some, like parsnips and rutabega, have been off for a while with no complaints that we know of.  Parsnips are hard to grow on our farm and rutabegas were hard to find homes for.  Each of the other items have been grown as recently as 2018/2019.  Some, like the radish and arugula, take more labor than we can afford to spend on them for the limited reward they might bring.  Others, like pok choi, bunching onions, flat-leaf kale, turnips and mustard greens, are useful for making sure we can provide CSA shares with enough quality items for the entire season.  We know they are not people's absolute favorite, but they gave us all something fresh during times of the year when other items just weren't available.  Leeks take forever to clean for sale/distribution.  Okra have given a rash to other harvesters other than Rob and Rob has too much else to harvest that is more popular.  Etc. etc.

In short, they all have good reasons for being off the grow-list.

Mostly out means they're still somewhat in.

It is possible that we will grow some cilantro or parsley as companion and habitat plants and they could show up as an offered 'herb' in the future.   We also use dry beans as a companion or to fix some nitrogen in the soil.  That will be the focus of those plants and any available dry beans will be a side effect of that.

We do have rhubarb plants, but they do not particularly love our soil.  If they recover this Spring and do well, we'll offer rhubarb.  If they die or do poorly?  Oh well.  They will then be entirely out.

We know we said "no" to turnips, but we have a BUNCH of seed.  Maybe we'll plant them out for a Fall batch.  If we do, we'll offer them.  They could be incorporated into a cover crop mix in the Fall where the main purpose is to cover the soil and prevent erosion.  The same might be said for the watermelon radish and Tammy likes to eat one or two of them in the Fall.  Once that seed is gone, we likely won't spend money for more.

We both prefer swiss chard to kale and we'll probably put a couple plants into a high tunnel for the late Fall.  If they exceed expectations, we can offer some.

Email ThisBlogThis!Share to TwitterShare to FacebookShare to Pinterest
Labels: GFF CSA, Just Veg-ing Out, Says You