Continued from Part I 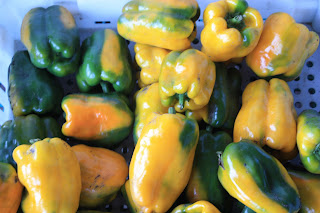 The picture above gives you a decent representation of what you get when you grow this pepper.  Variable size and shape fruit that turn yellow, but not uniformly so.  In 2009, we had fewer fruit, but the fruit were giants (and much rounder).  We suspect these plants would be stars in a personal garden, where every plant is in thick organic mulches (cut grass, etc) and the gardener gives them a certain amount of water every week.  They are 'tough enough' for our farm as well, but market quality fruit runs at 2 to 4 per plant.  That's not bad for a colored bell.  Fruits progress from large to smaller as the season continues.  Great taste, thick walled, four lobed fruit.  In some ways, Quadrato is on a curve similar to Wisconsin Lakes - next year could be fantastic. 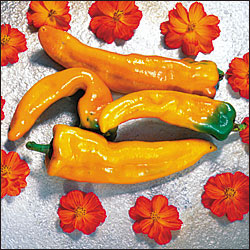 Golden Treasure is one of our all-time favorite peppers.  This is one of the best sweet peppers we grow for use on sandwiches.  It adds a nice color and taste to salsa/pico.  Each plant tends to produce about 14 marketable fruit.  This year was an off year due to their location, but they still fought through circumstances to produce nearly 8 per plant.  Response to the high tunnel was favorable, but we're not sure the benefit is sufficient to use the space on this variety - they usually do nearly as well in the field. 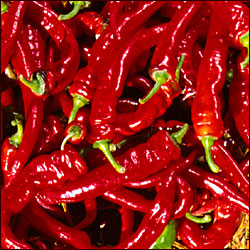 Our 2007 Veg Variety of the Year.  Jimmy Nardello's looks alot like a hot pepper, so you'd better set them on a different part of your counter so you don't confuse them.  These are fabulous sweet peppers that get even better when cooked.  They freeze well, they dry well.  Plants produce twenty plus peppers per plant.  Fruit shapes can be curled and knotted.  Sizes later in the season are smaller when they turn red simply because there isn't time for them to grow bigger.  Harvest begins peaking mid-August and continues until the plant dies (usually October).  Excellent response to the high tunnel environment with increased uniformity in fruit size and shape.  Taste *may* be slightly better, but that's hard to measure.

An excellent tasting green or red bell pepper.  Tends to be longer than many bells and can reach extraordinary sizes under certain conditions.  We expect about 6-7 marketable fruit per plant.  Tends to favor warmer summers more than King of the North.


King of the North
Decent taste, uniform shape (probably more like what most people envision for grocery store peppers in shape) and decent size.  Good eaten green or red.  Six to seven fruit per plant and tends to favor cooler temps more than Napolean Sweet.  Now you see one reason why we grow both. 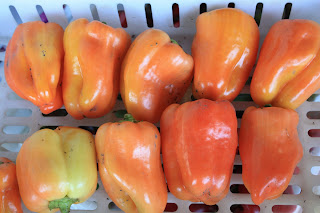 Garden Sunshine has a neat color and the peppers hold very well on the plant for a long time.  Our first bit of learning on these was that you want to pick them for best flavor when they have at least a little orangish/rust tinting to the pale yellow fruit.  If they are greenish-yellow, they'll be fine, but not that good for taste.  Plants are small.  Production numbers are low (4.1) in large part because they seem to be susceptible to fruit blights and rots.  They have a hint of paprika in their taste.  Our suspicion is that they would prefer a drier climate.


Purple Beauty
They're four-lobed, blocky bell peppers.  Purple on the outside, green inside.  Taste is passable.  Color is spectacular.  Smaller plants are very bushy, hiding the fruit deep inside the plant (most of the time) protects them from sunscald.  We're happy getting a few (about 100) of these every year to add color


Marconi Red
The shape of these is alot like a stretched out bell pepper since the ends of the fruit usually don't come to a point like Golden Treasure.  Yet, it occupies a space in our mind that puts it in a similar category to Golden Treasure.  Part of the reason is the superb taste.  They're pretty good green, but far better red.  The down-side is how long it takes to turn red.  They like longer growing season years.  It doesn't necessary mean they need super hot weather, they just need more days that are warmer than some of the other peppers we grow.  Plants can be somewhat sizeable (but not quite as big as Napolean Sweet).  We love what we get in a good year, but suspect those in southern Iowa and points south (zone 5 & 6) would get more consistent production.


Chervena Chushka
These landed in the same 'bad' patch of ground as the Golden Treasures this year.  Not entirely fair to this variety, so it will get another go.  We liked its 'fighting attitude'.  Looks like bigger plants with peppers similarly shaped to Tolli Sweet.