And, my thoughts have been all over the place recently. 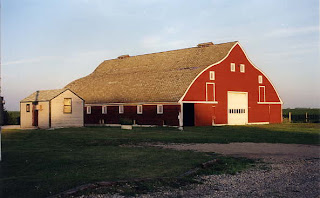 The picture above shows the super cool barn that was on our property when we lived in western Minnesota.  This was 'pre Genuine Faux Farm,'  but it may have had a lot to do with us ending up starting the farm.

I started thinking about this when I was considering our current barn in its skeletal state.  Frankly, our current barn never was in a configuration or state of repair to have lended us much use for what we do on our farm.  So, while it is sad to see a 100+ year old building on its way out...

On the other hand, the barn above would have fit our needs on our current farm extremely well.  You just don't see that design all that often.  The real kicker about the barn shown above, it did not originate at the location you see in the picture.  It was MOVED several miles and placed on this spot.  No, not by us.  Yes, it was on purpose.  We both loved that barn, we just didn't know what to do with it at the time.  So, if anyone runs across a barn like this - mail it to: PO Box.... 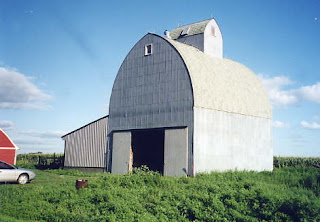 There was also a granary on the property.  It may not look like much on the outside....but, the inside!  The walls were made of 2x4 lumber.  That may not sound strange.  But, the 2x4's were laid on top of each other (flat) to make a solid wall.  They were not used as framing.  We joked that this is where we would have gone in case of severe weather.  That thing wasn't going anywhere.  We don't trust any of our current outbuildings for that sort of duty.  Looks like the basement in the house wins here. 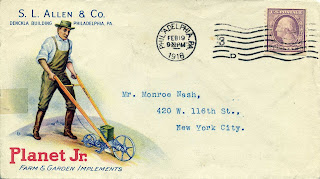 An amusing thing about people.  We think things that are new to us are, well, new.  We also tend to think that older ideas aren't worthwhile, unless they are old enough to be nostalgic.  Then, they might be fun to try - just don't expect to use them practically.  We also tend to think that the way it has always been done is the way it should still be done.   It's just that the way we are referring to is the way WE have always done it, not necessarily those before us.  Full of contradictions, aren't we?

The Planet Jr models of wheel hoes and seeders have been around for quite some time.  And, small farms such as ours will often use seeders and cultivators similar to one shown above.   It may sound odd to you - but I actually feel like I want to walk for a while behind a wheel hoe right now.  It's good exercise and it accomplishes something useful.  And, it would be warmer and I'd be outdoors right now.  Maybe that's not so odd sounding. 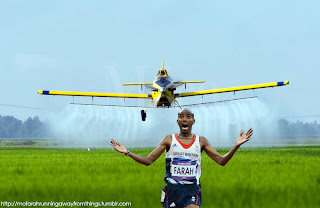 Then there is Mo Farah.  This picture was shared with us last August and provided us with some humor to balance the not so humorous events around that time.  This meme involved pasting a picture of Mo Farah in front of various objects.  Most of them were, of course, amusing.

I'd like to make this picture more amusing.  Let's rearrange the situation so that the airplane is being chased away by hordes of people who do not want chemicals dumped on their heads.  Yes, I like that. 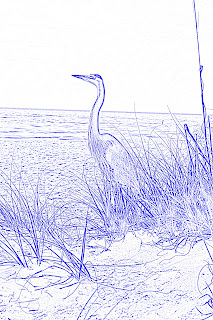 A while back, I played with some of my favorite digital pictures and tried out some of the effects provided by Adobe Photoshop.  It's not something I'll ever spend lots of time doing, but it was a nice diversion on a cold, windy day when I had a cold.

This serves as a reminder to me (and maybe to you) that a farmer who promotes diversity on the farm should probably promote diversity in his/her own life.  It should be possible to remain dedicated and appropriately focused on our farm without completely shutting out other things.

And there you have it.  A rambling post about ... things.  Enjoy.