It may not feel like it, but Spring is coming!

Soon, we will see things like cranesbill blooming.  We have several patches of cranesbill on our farm, remnants from a time when we did as much perennial flower gardening as we did vegetables.  These plants divide easily and continue to expand (but not in an invasive manner).  They only bloom for a couple of weeks, but they are worth it. 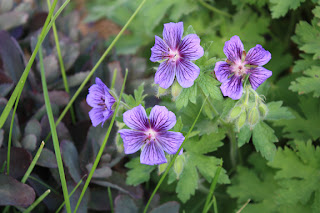 We've already seen a rainbow this year, but there was no green grass to go with it.  We're also hoping that pot of gold that is supposedly out by the high tunnel can be found this year.  We've got some projects that gold could help fund! 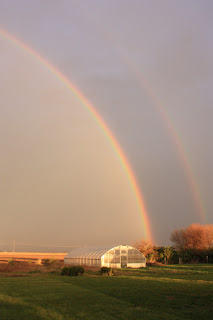 Every year we think we'll actually get around to putting in some mass bulb plantings on the farm.  Every year, we fail to get to it.  That doesn't mean we don't have a few tulips, daffodils and other flowering bulbs on the farm.  And, as long as the rabbits don't get them first, they can put on a nice little show. 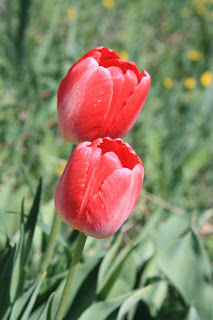 The dance of the seedling trays has already begun on the farm.  But, the days of putting them out on the driveway or near the cold frames are apparently still in the future.  Mother Nature has her times and her ways.  We're just going to have to work with it the best we can.  But, there's still the promise that we'll have tray after tray of starts that will soon become row after row of healthy vegetable plants. 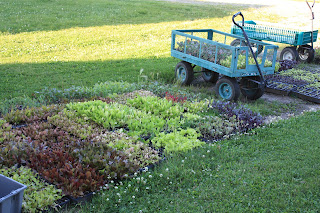 Speaking of plants - soon we will have tomatoes, peppers, eggplant, cucumbers, squash, basil and other plants available to sell to those who want to grow their own.  We intend to sell at the Waverly Farmers' Market and we will also set a couple of days to sell in Cedar Falls (and perhaps Waterloo) at the Hansen's Dairy stores.  Stay tuned to date announcements. 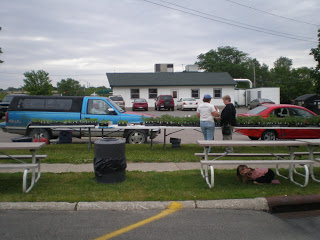 The picture shown above is already a bit strange for us.  We've grown used to Chumley the big red truck and can hardly believe that the picture shown here is less than a year old.  There he is, Grover, the blue truck with the red hood.  Rest In Pieces. 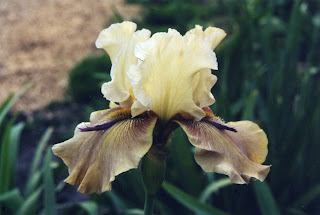 We're always anxious to see which iris plants will bloom for us.  We're anxious to see which ones made it through last year's dry weather.  Who knows how many or how much.  I guess we'll just have to wait and see.  Rob is hoping Thornbird (the name of the iris shown above) is one who will grace us with her presence this season. 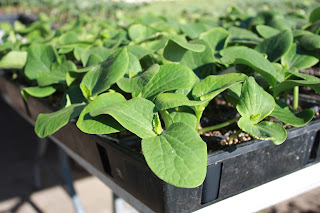 Seedlings hold the promise of more to come.  Get through the next few cold days and think about all of the green and growing things that are getting ready to start their growing season.
Posted by Rob Faux at 10:08 AM