At the end of the year, we have a tendency to do a "Best of the Year" post featuring our best "phauxtos" for the past year.  This year, we thought we would do something different.  We will still hold a vote on Facebook for the best pictures from the season.  But, on the blog, we're going to select from the candidates and include some of the 'words' they might bring to mind when we see them. 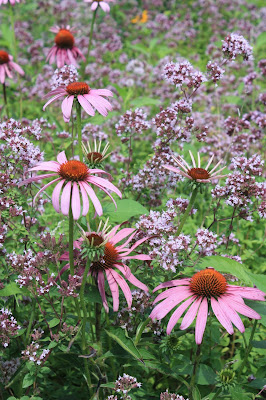 Today's picture features purple coneflowers and oregano in full bloom on our farm.  If you look closer, you might see a hint of other flowers (such as a rudebekia) in the background.  This picture has not been filtered in any way, so you are seeing the color just as I saw it.

The sky was slightly overcast, so the sun did not bleach out the color with its light.  There was only a light, sporadic breeze - just enough to keep a person comfortable.  In fact, this was one of those rare times on the farm that I saw something I liked and I stopped what I was doing to go GET the camera.  Often, the moment is lost because light and conditions can change before you return to record it.  I was fortunate that this was not the case this time around.

This picture tells us two stories.  The first is what you might expect - there is beauty in nature.  There is healing for the soul if you can just transport yourself to that field that is covered in flowers.  Most places in nature have a specific time when they really dress up to show off, but you need to give them the rest of the year to build up to that moment.

The second story is one of absence.  The flowers are clearly in full bloom.  The weather was beautiful.  But, there are no pollinators in this picture.  Coneflowers and oregano (and the other flowers in the area) are plants that often attract a whole host of pollinators, yet I observed none while I stood there to take pictures.  There was very little wind, there was plenty of light, temperatures were moderate and it was a typical point in the day when there is often significant insect activity.  This area should literally have been humming with activity at this moment.