Here we are on Postal History Sunday!

This is the moment where I (the farmer and postal historian) gives himself the opportunity to share some things that interest him with others who may enjoy it.  Please take a moment to take off your shoes, put on some fluffy socks and check any baggage you might have from the week at the door.

Let me remind everyone that you can click on an image to see a larger version.  Sometimes, you can see some of what I reference better when you allow yourself to do that!

This time, we're actually going to look at an item that is so far away from my normal interests that I find myself checking and re-checking what I've learned about it.

You see, the subject area that is postal history is so broad that it is not at all difficult to leave your comfort zone.  I am most comfortable with US mail to foreign destinations in the 1860s.  The next level of comfort is for mail in the 1850s to 1875 between different countries (primarily US, Canada and Europe).  Then it is any mail from 1850 to 1875.  From that point, we move further and further away from the knowledge that comes to me fairly easily.

So - today we are looking at an item that was mailed in 1931 from German to Russia - via the North Pole?  What's up with that? 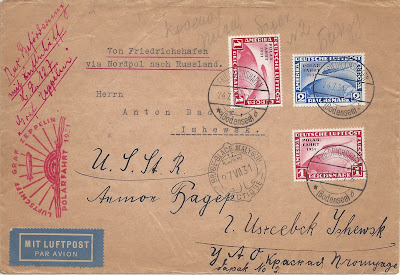 By 1931, philately (stamp collecting) had a strong following.  In fact, it was not at all uncommon for people to send 'letters' via certain routes or on certain dates to simply create a commemorative item for some event.  For example, each time a new airmail route would open up in the United States, there were individuals who would make up envelopes with special designs to be mailed the first day the route opened.  Sure - they paid the postage and they made up a valid envelope or postcard - so these were real pieces of mail.

But, this is where the postal historian sometimes collides with souvenir hunters.

I - as a postal historian - prefer to find pieces of mail that carried real letters or real business correspondence.  I am less excited by items that were created as a souvenir for an event (often called event covers).  On the other hand, there are times when the souvenirs themselves illustrate an important event in the history of postal carriage or they connect so strongly to a historical event that has a good enough story, that I am willing to bend a good bit!

For example, the item I am highlighting today was a special event cover to celebrate a special flight by a zeppelin airship.  In the 1930s these 'lighter than air' ships were coming into more prominence, providing an opportunity to cross the oceans more quickly than ships that had to fight their way through the water.  In fact, there was even discussion that it would allow travel 'over the poles' of the Earth.

Knowing a good thing when they saw it, many airship flights were promoted to the philatelic community to encourage the sending of commemorative mail for fundraising purposes.  Postal administrations all over the globe got into the act by issuing special stamps and establishing special postage rates for these flights (typically costing more than normal mail).  And, it worked!  Much of the surviving mail items from these flights were made up just to commemorate the event. 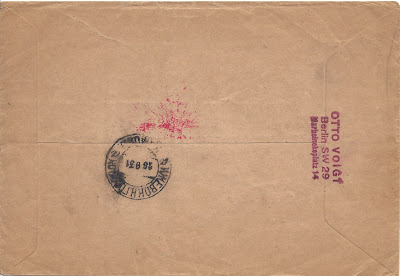 This experimental flight of the Graf Zeppelin LZ 127 was largely funded by philatelic interest (believe it or not), carrying 650 pounds of mail at the time it departed Leningrad (it returned with another 270 pounds going the 'other direction' on the flight.  It is estimated that around 50,000 pieces of philatelic mail was processed through this flight.

The airship left Friedrichshafen on July 24 and made stops in Berlin (July 24) and Leningrad (July 25).  It then transferred its mail to a Russian icebreaker ship on July 27 near Hooker Island.  If you look closely, even the stamps had a special marking ("Polar Fahrt 1931" = polar flight) and were sold specifically to persons who wanted souvenir mail to go on this flight.

If the person mailing this just wanted an item to be mailed from Germany to Russia so that it got there as fast as possible, then it would have made sense to take the letter off the airship in Leningrad.  But, the typed instruction "via Nordpol nach Russland" made it clear that the sender wanted this item to get off-loaded on the scheduled icebreaker rendezvous.

The Russian icebreaker Malygin then took the mail from the airship back to land, where the mail entered the Russian mail system.  This piece of mail arrived at its destination: Ishevsk, Russia on August 8.  Clearly much later than regular mail would have taken - at a much higher cost.

For those who would like to learn more about the scientific and mapping purposes of the 1931 polar flight of LZ 127, I suggest this summary on the airships.net site. 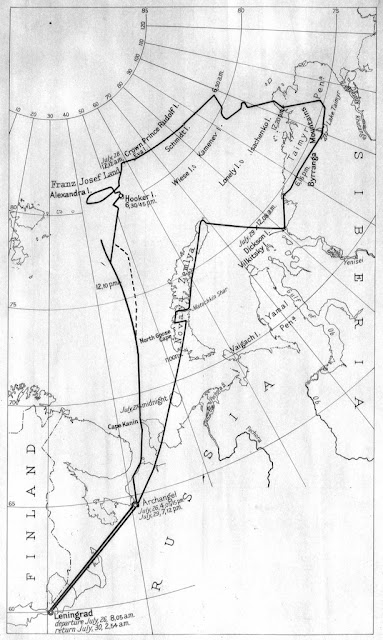 I hope you enjoyed a quick voyage to view the North Pole from an airship.