Weather is an integral part of what we do at the farm. Thus, we might spend a little more time learning about it and observing it than others. Recently, I was exploring the National Weather Service's site and found the following graphs available for summarizing the temperatures and precipitation for a given year.

The dark blue line for temps indicates the range of temperatures traveled during a given day. So, you can get an idea as to whether a year was warmer/cooler than usual by looking at how much of the normal range is covered/not covered by the actual temperatures. For example, if you look in the area of the graph for January 2008, you will see lots of green under the actual temperatures - so we had a warmer than average period at that time, followed by a dip to below average temperatures. There looks like there was even a record set for a low towards the end of that month. 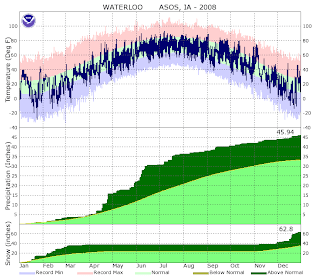 The green areas show rainfall and then snow fall amounts. The light green curve shows what an average precipitation year might look like. The dark green shows places where we were above the average total for the year up to that date. A tan-ish color indicates periods where we were below average total for the year. So, 2009 started a little dry, but was generally a 'wet' year. You can find dry periods by looking for points where the graph flattens to horizontal (see September for example). 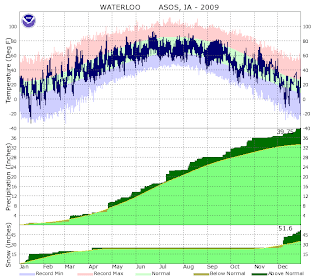 What do these show us?

We know 2008 was a difficult year and we can summarize it by saying it started out cool and very wet. But, we were saved by a warmer than usual fall (with average rain amounts - since it's curve parallels the average at that time). Of course, we KNOW this because we LIVED it. However, if you can get the data in front of you, you can confirm the facts and consider what sorts of 'windows' in the weather we one can exploit during difficult (and even good) seasons.

For example, the past four years show a trend for dry weather during the second half of June. While this may not fall exactly at this point every year, we do see a two-week period where things dry out. Often, we are still putting in transplants and crops to maintain succession plantings in June. So, if we hit the dry spot we need to either irrigate or delay the planting to get past that dry spot. It also means we should hit cultivation and weed control hard in the first half of the two-weeks before soil gets compacted.

While we may do these sorts of things during this time of year anyway, knowing this can give us more conviction in our tasks because we know what the trends TEND to be.

Of course, this is the weather we are talking about, we'd better take all of this with a grain of salt.
Posted by Rob Faux at 11:09 AM