We realize that you've seen some of this already - if you've been reading the blog.  If you have not, maybe you can get an idea about our year by reading just ONE post.  Ok, that's too much pressure.  How about if I just list 10 things that were fairly big occurrences for us at the Genuine Faux Farm starting with......

Ok, this could, once again, be our number one event for the year.  We don't want to dwell on it - yet we cannot ignore it.   Entrenched weather systems made life very difficult for us.  Excessive rains saw many of our crops die as they sat in/under water for periods of time that were simply too long for them.  It's a terrible thing to watch crops you've worked hard to get going turn into nothing.  It's even worse if you feel the weight of responsibility of growing for your CSA members.

While we don't wish for this sort of growing season ever again,  we have to admit that some very important things happened that might not have if it were a "normal" year.  For example, a normal year would not have encouraged us to work so hard on short season crops for the fall.  As a result, we learned how to successfully time and grow a number of fall greens, legumes and root crops that we might otherwise have thought about, but not tried.  As has been said - it's an ill wind that blows no one any good.  It was an ill wind, but we still see positives coming from it.

This may rank first. as the 'surprise' of the year.  This purchase was not in our year plan and was only barely on our radar as a potential future purchase.  But, the opportunity came and we took it.  While we're still locating implements for it and we are only just getting used to it, we see this tractor as one of our moves to become a more resilient farming operation.  And, we still think of our neighbor, Kent, as we use it on the farm.

We initially called this thing the Poultry Palace, but we are wondering if Pavilion might be a better label?  The reality that the barn will likely not be repaired made it important that we begin working on new shelter for our poultry.  Step one occurred this year with the cleaning of the old hog confinement building.  One room was built inside for the turkeys with a door to the back pasture area.  Fences were put up for one of the three paddocks.  There is still much to do with the pasture and the building.  But, a successful start on converting the building is sufficient to make the list.  Where will we find the time and resources to complete this project?  We'll figure it out, it is worth it.

The seed starting operation in the Spring includes time consuming tasks that desperately needed addressing.    Our first move was facilitated with the construction of some fine cold frames (thanks Dad).  There is certainly much more that could be done in this area.  But, the first step is often the most difficult.

One of the ideas behind Community Supported Agriculture farms such as ours is the idea that farmshare holders invest in the farm and accept that they will deal with the success OR failure of the farm during that given season.  It is one way we can get around the fact that farms such as ours cannot get reasonable crop insurance.  But, having that insurance does not mean you wish to use it.  In fact, we do our best to do everything we are able to do in order to avoid using it in any way, shape or form.  That is our responsibility - to work hard, make intelligent choices and to continue to learn so we can provide produce in nearly any growing season.

On the other hand, if we had not had difficulties this year, we might not have fully realized exactly how much our CSA members mean to us.  Rob was actually somewhat embarrassed to have farmshare holders remind HIM that their membership in the farm included an explicit agreement to be supportive through the good and the bad.  Suffice it to say, the support we received from our members this season kept our heads above water (literally and figuratively).  If it were not for them, we would not have had the energy to put into our late summer and fall activities.  As a result, we had excellent fall crops and energy to work hard to find ways to reduce the impact extreme weather might have on our crops in the future.

5. Changing of the Guard

We have various non-human 'farm managers' at GFF.  2010 saw some of them leave us.  Doughboy had long been one of our farm cats who could be counted on to accept a good skritch behind the ear and share opinions about our cooking.  For an outdoor cat, ten (or so) years is pretty good.  But, we were still sad when he left for warm car hood in the sky.  Bob, the barnyard manager, ran into a problem he couldn't handle and he is now succeeded by Harold - who looks very similar to Bob - but with less of a penchant for posing.  And, the most painful loss occurred when our female indoor cat, Eowyn, left us after nineteen years.  While we still miss her and her brother, Strider, we are honored with the presence of sister cats Bree and Hobnob.

And, perhaps on a less dramatic level, we finally retired our computer of 7 years and purchased a new one.  New computers are nice, but they don't necessarily equate to more productivity.

The hardest thing for us to do is to GET OFF THE FARM.  But, if there is one thing we are learning, it is that we need to take care of ourselves so that our work continues to be productive and positive - even if the year is a tough one.  During the summer months, Rob plays baseball in Newton - which forces time away.  The good news on that front is that he managed to get his first and second wins as a pitcher for the Newton Cardinals.

During the height of the season - while most growers were slogging through mud - we had the opportunity to participate in the filming of a discussion of Iowa growers for an HBO special that will air regarding the 2012 farm bill.  It was interesting to be involved, but it was so much more helpful to commiserate with others about the season and its difficulties.  Even better yet, we had some friends from Scattergood Friends School farm come up and work on our farm for half a day.  We can't explain how much better our attitudes became after that.  And, another oddity for us - we went to a concert in the middle of the growing season.  We must be getting lazy.

The year culminated in a trip to Florida to visit family.  The simple fact that we were not doing chores every single day was a blessing.

With the addition of a high tunnel, we have produce later in the season.  And so... we created an extended season CSA that ran for seven weeks (Nov-Dec).  Participants received excellent variety of greens and other short season crops.  We're pleased with our first attempt at extended season growing in the high tunnel.  We feel the share value given to our members was excellent.

Our method for securing feed for the poultry has been to load the truck up with 11 trash cans (used exclusively for feed - in case you worried about this).  We would then drive up to Frantzen farms and load each can separately, pushing it to the front of the truck as they fill.  Upon returning to the farm, we had to unload each container and move it into the barn or Poultry Palace/Pavilion.  Each can probably weighs around 200 lbs.

Well, say hello to efficiency!  Thanks to Jeff (the superhero Band Saw Man), we now have a trailer with a bulk bin on it.  The filling goes much faster and the trailer merely needs to be placed under shelter when we return.  I guess we need to improve our backing up the trailer skills.

1. Construction of the new high tunnel

We held a field day for the construction of the new building and we were able to grow for an extended season CSA all because of this structure.  It's the most visible change on the farm and it is the one that has changed what we do the most.  We've blogged about it before and we'll blog about it again.  So, we'll just leave you with a picture. 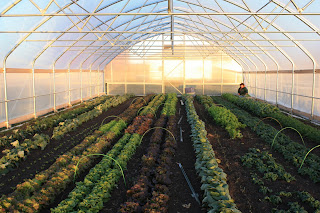 Email ThisBlogThis!Share to TwitterShare to FacebookShare to Pinterest
Labels: Excuse me sir - you appear to be listing