Likely the last in the series for some time and we'll get back to farm related posts.  We are now back from travels away from the farm and it was a good thing to be off farm for a while. 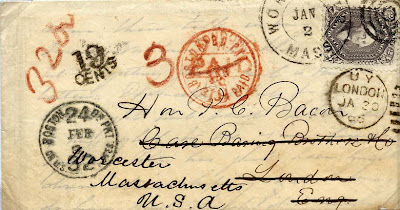 This cover is one of my favorites because there is so much going on!  Let me explain.  No, there is too much.  Let me sum up.
Essentially, this letter was sent to London from Worcester, Mass in early 1866.  Evidently, the addressee was from Worcester and was traveling to London.  Baring Brothers & Co provided services to many travelers to accept mail on their behalf while they traveled in Europe, which included forwarding mail back to the US if they concluded their travels.  This was the case here.
Postage was paid to get this envelope to England (24 cents) and it was received by Baring Bros.  But, since the recipient was no longer in Europe they sent it back.  Remember, it was still possible to send mail 'collect' (no payment of postage).  And, that is exactly what they did for the return trip.  No British postage was paid by Baring Bros.  That means the recipient, Mr. Bacon, had to pay for the privilege of receiving this piece of mail.
The cost was 24 cents = 1 shilling.  But, you might notice a bold "US Notes 32 Cents" marking on this cover.  At this time, there was a difference in value between US paper currency and the gold standard.  Currency had a 'depreciated' value for some time after the Civil War.  Thus, unpaid mail could be paid either 24 cents in coinage with appropriate valuable metal content OR it could be paid in US currency (notes) at a different ratio to maintain the real value needed by the postal service.  At this time, that ratio came out to the recipient needing to pay 32 cents if they opted to pay in currency.
Clearly, I could give more accurate detail on this, but I suspect this is enough for most of you.  But, the real reason for showing this is to illustrate what I like about these kinds of items.  They give me a view into the story of the times.  And, the best part is that the story can be about individuals, groups, governments, places, events or daily chores.  Sometimes, the story includes parts of all of these.    The challenge is reading them so you can see what the story is.
Hope everyone had a good holidays and that you've set yourselves up for a good year!
Posted by Rob Faux at 6:43 PM