It may only be half way through the month.  But, we had a batch of pictures we wanted to share. 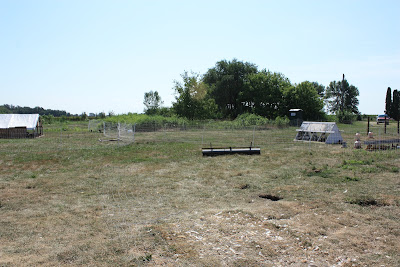 We're a bit shocked by how green things are now that we had a bit of rain and some cooler temps.  The picture above shows how dry it was in early August.  It also shows how we are trying to get the birds off of the NW pasture that was sprayed. 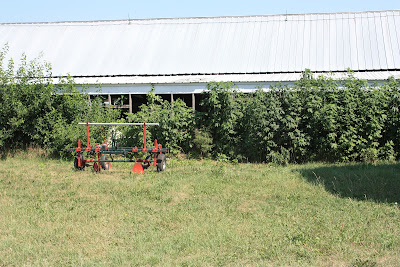 the Poultry Pavilion needed some weeding and TLC.  Thanks to the Figura clan for help! 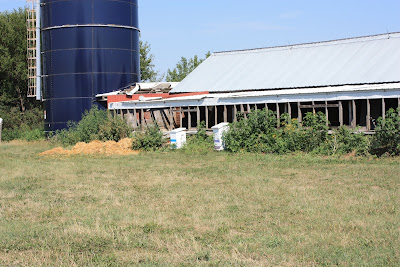 Even the bees wanted us to remove a few weeds.  Rob did that to be safe. 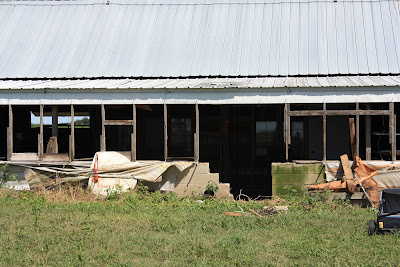 And, then Dad Faux came and helped open a hole in the South side of the building.  We're going to try to have the chickens go out this way for a while to get them off the North pasture entirely. 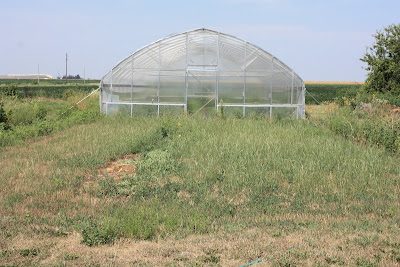 Wow, the field to the East of the high tunnel was parched.  We've now mowed down the cover crop, tilled it in, chisel plowed the area.  Looks very different - we'll try to get a picture of that in the 2nd half of August picture fest. 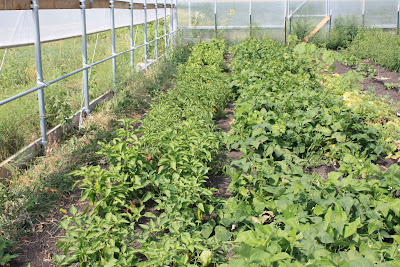 Ok - the spraying issue is still a daily part of our lives.  Here is the inside of the high tunnel.  At left, peppers.  At right, green beans.  Tests came back pesticide and fungicide positive.  All of these will be pulled out after we harvest, weigh and count. 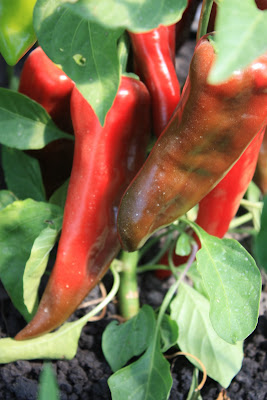 Gorgeous Tolli Sweet peppers.  Rob was so proud that he identified this sweet pepper for the high tunnel this year.  And they did him proud.  Disappointed we can not eat any of them due to the spraying. 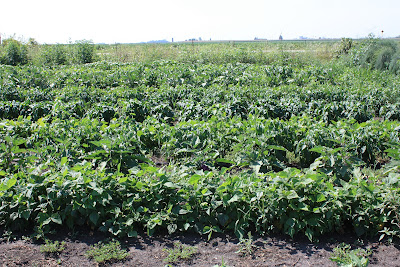 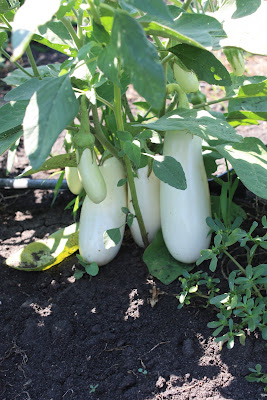 And we were getting some nice production.  Above is Casper, a white eggplant.  Again, none of this production will do us any good this year.  All of it tested positive for pesticide and fungicide. 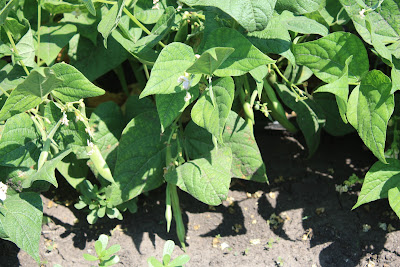 The year of the green bean!  These are from the Southwest field, so they also were sprayed.  However, our beans in the East are fine and doing well.  As of August 15, we had picked 630 pounds of green beans.  Pretty happy with that. 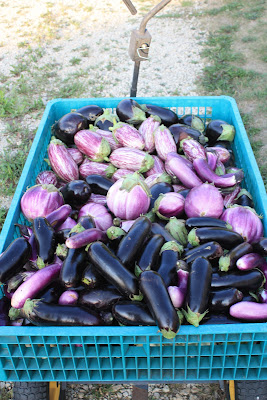 A cart full of forbidden fruit.  Nearly 200 eggplant destined for the compost.  If you don't fully understand this, let us clarify.  The chemicals used that were wrongly sprayed on our farm were NOT intended for food crops.  It is not as if most healthy people would keel over and die immediately if they consumed these.  However, some with particular illnesses, young children, etc could get sick.  And, sufficient amounts of intake could cause illness.  We are not going to let anyone eat any of this as long as there is risk. 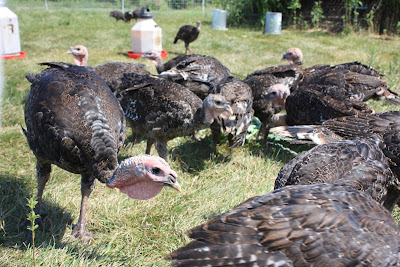 Ah...  curious turkeys.  They can be fun to watch. 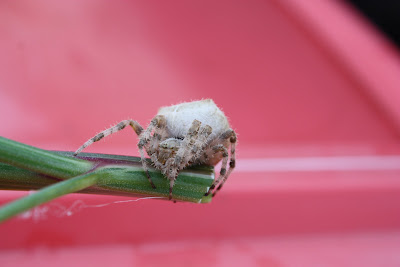 Itsy the spider.  We removed her from a picking container and hope she, and her egg sack, found a safer home.  We've worked hard to encourage a diverse population of insects and spiders on our farm. 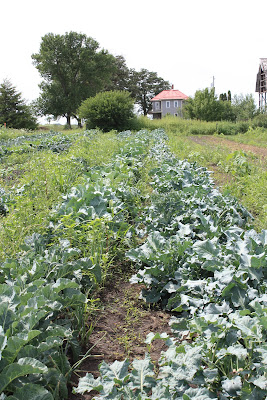 Didn't we weed this field before?  How is this possible?  It gets more interesting when wind rolls cauliflower and broccoli plants into the rows. 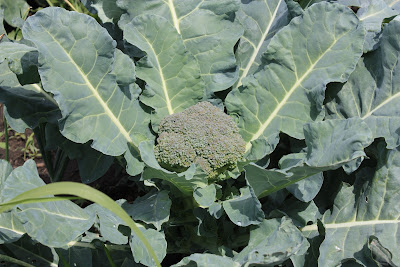 Broccoli - gotta like it.  Been a decent year for them. 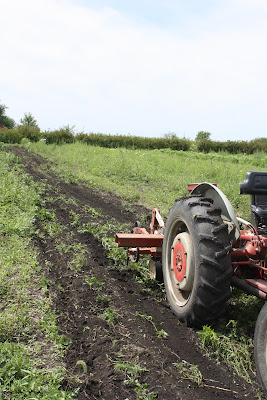 Durnik the tractor at work.  Of course, he ran out of gas (literally) at a point nearly as far from our buildings as it could get.  I keep telling myself to just put more in the tank every time I go out.  But, do I listen? 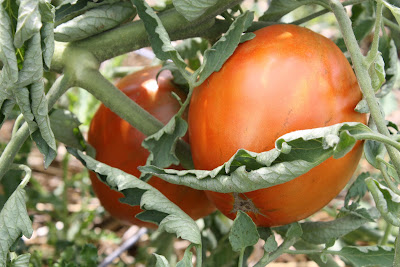 Stars of the garden - Italian Heirloom tomatoes.  Averaging about 3/4 pound each.  Meaty and delicious. 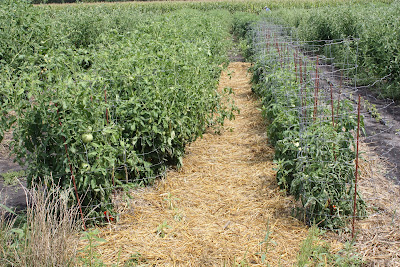 We've had some odd growing years, but some of the things happening in the tomato field this year have me baffled.  Two varieties in these rows.  Rutgers on the left and Druzba on the right.  Druzba is typically more compact, but not this much more compact.  Druzba has never had cracked fruit for us, until this year.  I've checked the irrigation line, it's ok.  Both mulched.  Both irrigated, weeded and otherwise cared for in much the same way.  Hm. 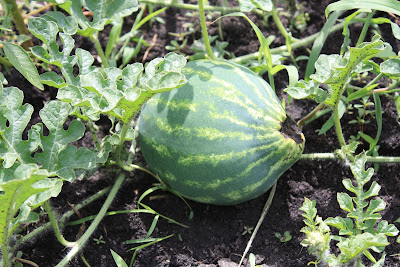 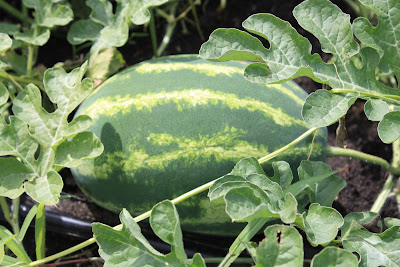 This one is the way it should be.  Orangeglo watermelon. 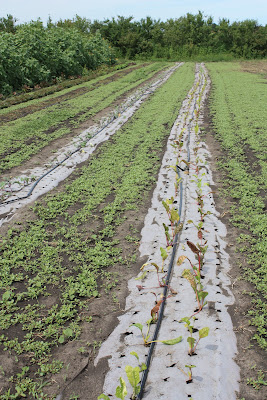 A little bit more use of the paper mulch.  this time for kale and chard.  We've been pleased with the use in the watermelons and melons so far.  But, the experiment is not over.   The end game may cancel out any early success.  So, we continue to observe and learn. 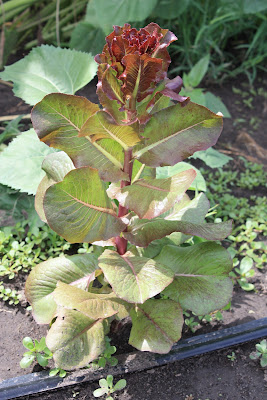 This is what excessive heat can do to lettuce.  this is called 'bolting' or 'towering.'  Typically if lettuce does this, it is trying to flower and set seed.  Taste tends to get strong or bitter.  This plant never did put on the size we needed or wanted prior to harvest.  It was a gamble. They were in trays, they needed planting.  They bolted.  It happens.  Above is Rouge d'Hiver 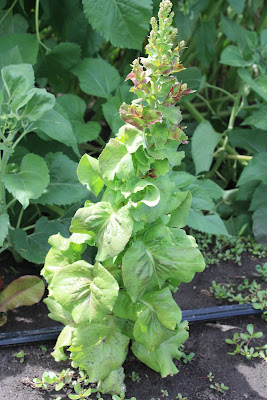 And, Grandpa Admires is quite heat tolerant.  But, it was excessive heat. 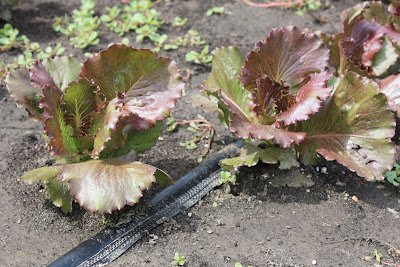 On the other hand, Pablo is doing fine.  It is a longer season lettuce (70 day), which may be part of the equation. 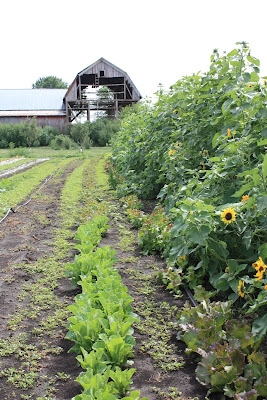 Sunflowers in the West, lettuce just East in an effort to provide afternoon shade.  Working for the Crispmint, Pablo and Bronze Arrowhead.  The down side is what happens in a strong wind, you may have to cut out some downed sunflowers.  The other thing to look for is the need to irrigate a bit more, sunflowers can be very overbearing when it comes to water. 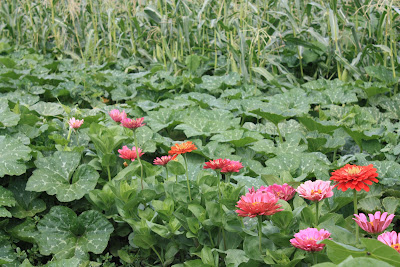 When an intercropping plan comes together.  Zinnias in the pumpkins.  Pumpkins in between two successions of sweet corn.  Sunflowers bracketing the whole field.
Posted by Rob Faux at 5:55 PM