We usually intend to do more with pictures this time of year.  But, as you can guess, we don't always find the time to get the camera out.  And, in fact, we often have a hard time believing time has gone so quickly.  Add to this the fact that we have slow internet - so uploading opportunities are limited.

But, the farmers are taking a day to do some computer work where the internet surpasses the speed of dial-up!  The result - you get to see some pictures.

It was nothing like it has been other years, but not as bad as we feared.  Here's some of the garlic on the way in from the field July 2.  Note the very dry looking stems and the dry looking fields behind.  Typically, we don't pull our garlic in until July 20. 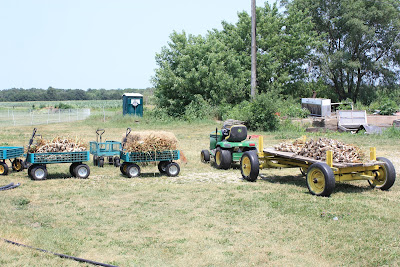 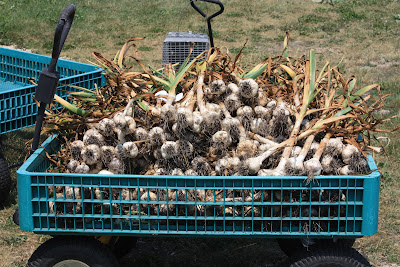 I Want My Kohlrabi

Another picture from early July.  This gives you an idea as to what happens when we pull in kohlrabi (for example) for a CSA harvest.  The cleaning/hydrocooling area was already full, so these had to wait a few minutes before we could work with them. 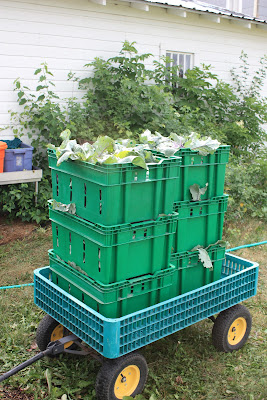 Kolibri is a hybrid purple kohlrabi and Winner is a white hybrid.  We find kolibri to be a bit quicker to be ready and also quicker to get pithy - especially in hot weather.  When peeled, both have a similar white color (the purple is only on the skin).  We also grow Early Vienna (an open pollinated white), Gigante (open pollinated, large white) and Superschmeltz (medium to large white). 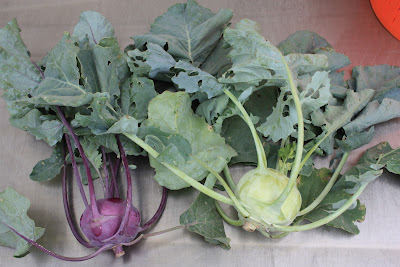 The Olympics Should Have THIS Sort of Fencing
This picture is both ironic and an illustration of what happens when you have good friends.  Our 'Gang of Four' farm alliance group is again visiting each other's farms and doing a project.  the project on our farm was to start putting up a permanent pasture fence in the NorthWest and to try to finish the new hen room in the Poultry Pavilion.  The irony?  We're now frantically trying to get birds off of this pasture (see last photo). 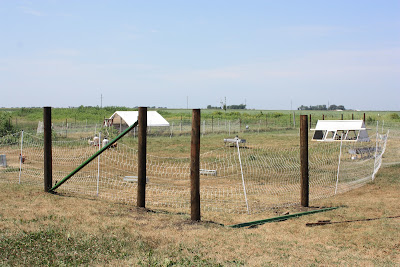 Cough Cough.....Water!
We've spent many hours trying to get water to crops and to set up irrigation lines.  Below shows a picture of the pumpkins at about 11 am on July 22.  They're letting us know that they aren't liking things so much in this illustration. 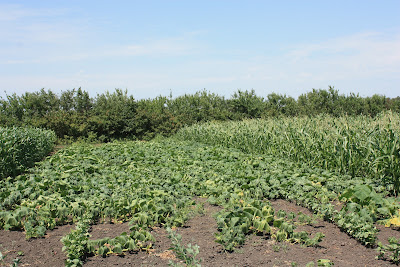 We tried to keep the lettuce going.  But, hot dry weather makes it very difficult to get the transplants (or seeds) going without a high loss percentage.  This batch was planted just east of the sunflowers, which helped reduce the number of hours of hot sun. 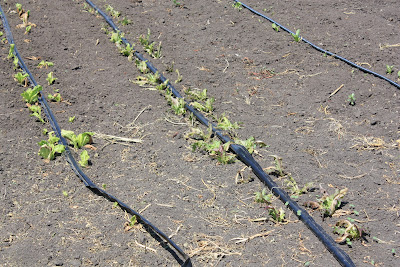 On the other hand, the melons and watermelons are liking this weather (as long as we give them a drink now and again). 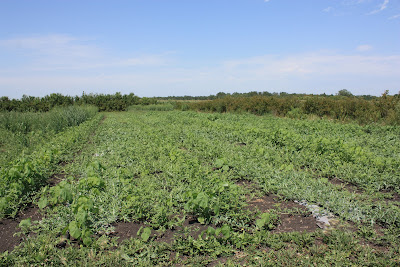 A bit of an idea as to how far irrigation spreads from a drip line.  Placing these lines well is one key to avoiding wasting alot of the water. 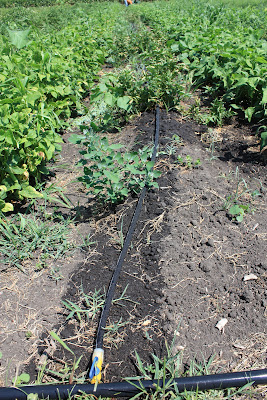 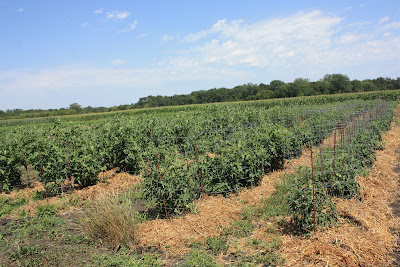 The summer squash and zucchini have struggled in this weather and the root crops we threw in next to them really didn't germinate.  As a result, weeds got a foothold, requiring a significant weeding push.  Below is an illustration as to the piles of weeds we can manage to create. 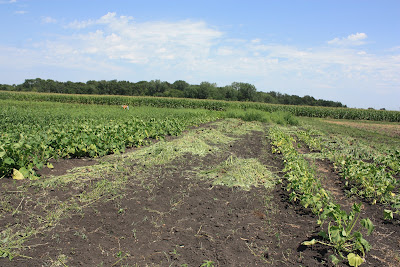 Potatoes and beans.  Pretty clean in this picture.  Funny how it never seems to stay that way! 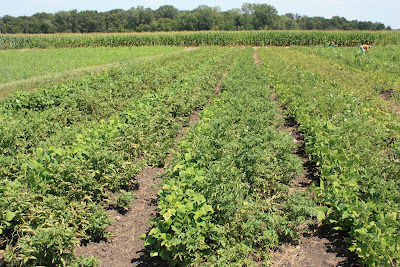 Butterbeans in the middle, surrounded by pea rows, then cucumber rows.  Picture is from July 22 - it looks NOTHING like this now.  It needs weeding...again.  And the cuke vines have started to really crawl. 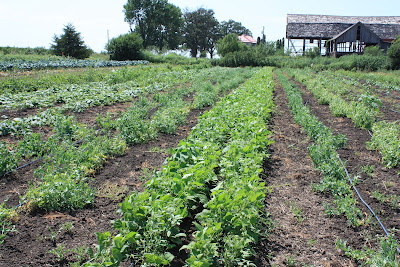 Crops that tend to like warmer weather (in general) though too much heat at night can prevent fruit set are eggplant and peppers.  Looking very good on July 22. 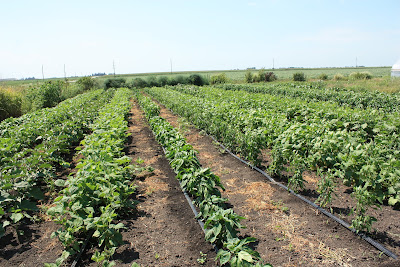 More on Weather
This picture is east of the house (by our east fields) looking towards where the ducks have been kept for part of the season.  The boxy structure under the telephone pole took an unscheduled flight toward the fence corner at right in the picture.  Happily, it has undergone extensive repair and is back in use. 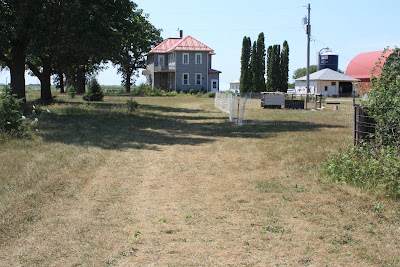 Normally we have some nice looking clover in the yard, the pastures and ditches.  This clover does not look so happy. 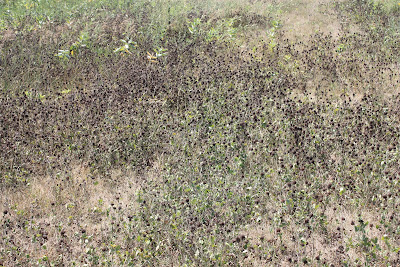 When we finally did get a little rain, it came with wind.  The sweet corn we had thoughts of harvesting decided to take a nap.  It has since twisted itself up vertical again.  Just a little harder to harvest - if the kernal formed for us... 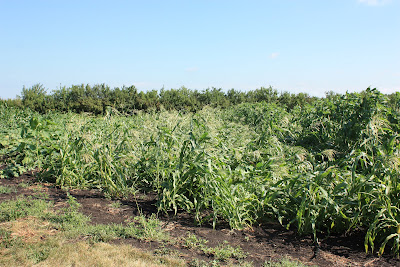 How NOT to close a month out.

And, as you all likely know by now.  We were hit by an aerial sprayer on July 27.  It's hard to believe that it has been 2 weeks already.  The amount of energy we have expended on this situation has been significant.  Whether all of the energy used was productive or not is far from the point. 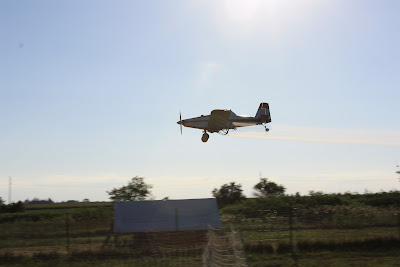 Irony
The irony of the fencing is the fact that we spent time working on finally putting in a permanent fence and finishing a room to use the northwest pasture more efficiently.  The plane you see above is spraying that pasture.  As a result, we can't leave the birds there.  The other irony, if you see it, is the picture just 5 days prior to the spraying event showing our peppers, eggplant and beans.  I had intended to put a blog post out showing this field and using it to illustrate how we were working to keep thing producing in a drought.

Future Goal
We'd like to run out and get another series of pictures for August before it is September!  But, failing that....

Consider coming to Summer Fest this year on August 26!  More details in upcoming posts.
Posted by Rob Faux at 4:02 PM

Email ThisBlogThis!Share to TwitterShare to FacebookShare to Pinterest
Labels: overspray, Picture This, X-games