We get questions from people in the CSA, people at the farmers market, friends, family, other farmers, our cats, ourselves and sometimes even a turkey.  We don't always remember who asked the question, but we do try to give some answer when it is asked.  And, sometimes, we even think about sharing the answers with others.  This is especially true if we think the answer won't embarrass us.

Ok, maybe that isn't entirely the case.  Nonetheless, here are some questions that were asked by someone, somewhere that come to mind and that might be worth sharing:

There have been alot of cucumbers the last couple of weeks.  Is this a record crop?
Oh my.  This question was likely asked by someone who was not in the CSA in 2010.  For those of you that were, you may recall that we were even suggesting that people GRILL cucumbers to try to eat them up.  (By the by, grilling cucumbers actually works pretty well - some similarities to zucchini.)

In 2010, we harvested over 7000 cucumbers.  And, this does not include the cucumbers we picked that went directly to the turkeys and chickens.  It was about the only thing that went bonkers for us that year.  Last year was a good, but not abnormal production year.  We pulled in 5800 cucumbers for the entire season.  So far this season we are at 2630.  The start was later than 2012, but the pace is similar.

The follow up question is/was: Why did it seem like we went from no cucumbers to a bunch?
The simple answer is that the wet start to the season compressed our plantings of cucumbers.  Normally we have 2 successions to spread out the harvest.  Our two successions ended up going in within a few days of each other.  That does nothing to spread out the harvest.  As a result, both matured at the point when the 2nd successions is supposed to start.  The best laid plans.... 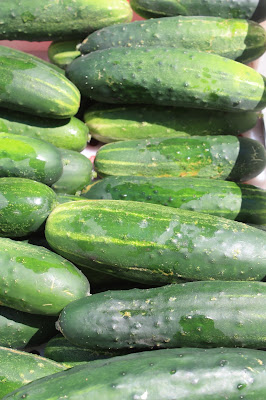 How many years has the CSA been going?
We are currently in our 9th year.  No, we don't really know how that happened.  We started with about 20 members in 2005.  Our CSA currently has 113 shares being filled, with a number of them being split. 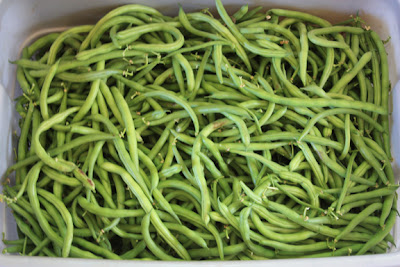 For Rob - give him fresh green beans to eat, lightly steamed and he is very happy.  Peppers and tomatoes are the most fun to grow.
For Tammy - give her a Golden Treasure sweet pepper a Wapsipinicon Peach tomato or some green beans to eat.  Luckily, she likes harvesting the green beans. 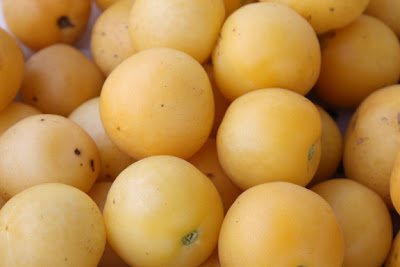 Are there any you don't like?
For Rob - he still does not like to eat carrots.  And onions are a pain to grow.
For Tammy - has 'learned' to appreciate certain eggplant, but won't go out of her way for them.  She does not like harvesting summer squash and zucchini - it requires full body armor.  And harvesting/cleaning leeks - ugh. 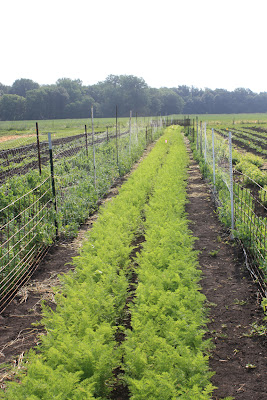 When are we going to see tomatoes this season?
We must reference the weather once again.  We were unable to get tomatoes into the ground until very late.  Even then, we lost several because the field was too wet.  Since then, we've had a lot of cool nights, which does not help with production of these warm season loving plants.

Simply put, our plants look like they should on July 20, not August 19.  Even the high tunnel tomatoes are behind.  But, the heat this week may kick them into gear.  We shall see.  All we can say is, it isn't for lack of trying.  We expect the high tunnel plants to kick it in at any point.  We won't be surprised if we don't see the beginning of any real harvest from the field until mid September.  Sure hope we don't get an early frost.

How do you know when you are doing well when you grow a certain crop?

Whoever asked this one deserves applause.  Why?  Because it is a great question.  And, the answer is complex and changing (as we continue to learn more each day).  It probably deserves more than what I'll give it right now.

1. How does our yield compare to numbers held up by other trusted resources?
For example, Johnny's provides a list of yields for direct seeded crops.  While we are always cautious about such comparisons, it can give us a baseline to begin assessing.  Johnny's indicates a harvest of 25 pounds per 100 row feet for peas.  Our Amish Snap pea row as 200 foot long and we harvested 46 pounds.  The Oregon Sugar Pod pea was also 200 foot long and we harvested 57 pounds.  The conclusion based on those numbers is that we are doing fine. 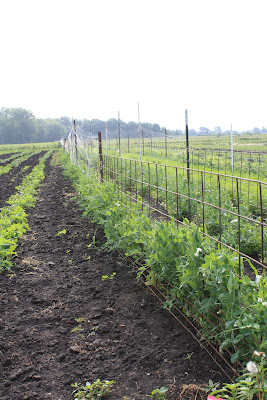 2. How does our yield compare to our history?
Johnny's suggests that a yield of 45 pounds per 100 feet is great for green beans.  So, how should we feel about 94.5 pounds from a 60 foot row in the high tunnel this season?

Before we pat ourselves on the back, we should ask whether we are growing the same way they were when they established the average.  And, if we cannot determine that, we might need to rely on our own history.  Prior history tells us that 1.75# per row foot of this variety is reasonable to expect by the end of the season.  We're not done picking out of this row yet, so it looks like we're on target. 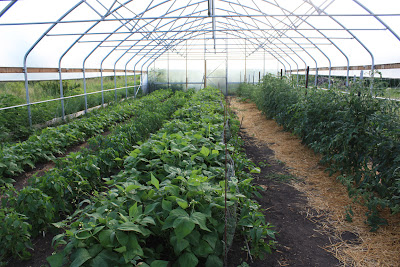 Rest in Peace
And, finally, we were saddened to hear of the passing of Dick Thompson, one of the most intelligent and caring farmers this world has known.  If every farmer thought about farming the way Dick did, we wouldn't be so despairing of what is going on in agriculture right now.  And, it wasn't so much about what Dick concluded, or what Dick believed were the right ways to do things as much as it was about how he worked to learn and strove to do what was best for his farm, for the community and for the environment.  He asked important questions and then expended energy and effort trying to find the best answers that were feasible.

Hey agribusiness, take another look at what Dick Thompson did in his lifetime.  He illustrated for all that certain key concepts could and should be the cornerstone of a farm business.  Diversity is the best insurance.  On farm research is the best way to learn how to do things on your farm.   Being environmentally minded is not the opposite of having a financially viable and successful farm.  Sharing ideas and having open dialogue with other farmers makes all participants stronger.  And, finally, that the farm is a good place for families to live and grow in Iowa.
Posted by Rob Faux at 5:25 PM

Email ThisBlogThis!Share to TwitterShare to FacebookShare to Pinterest
Labels: Paint by Number, Says You