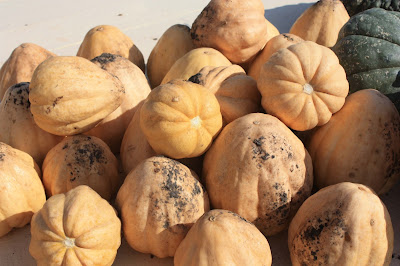 This IS an acorn squash. It just has a cream colored skin. Size can be slightly bigger than standard green acorns such as Table Queen, but not much bigger. These vines are very hardy. Dry year - no problem, just get them started as seedlings. Wet year - it can do that. Cool year - ok as long as you get them in on time. Hot year - it doesn't really notice. From a production standpoint, we can't do better for an acorn squash. We also like the taste of these better than standard green acorn squash. We find them to be a little less stringy. We've had them store into January, but don't expect it. It would normally be safe to save them into December. Vines crawl around a bit, but not much more than average winter squash. Easy to pick - in part because the color makes it easier to see them. We don't lose much of these to pests or other problems. We have noticed that if the stem comes off flush with the skin, you should eat that fruit sooner than those that maintain their stem.

And, of course, we had a crop failure for these in 2014.  It just proves that when enough things go wrong, a strong variety can still fail.  Nonetheless, our faith in Thelma Sanders remains strong!  2015 is the year for it to set records!


Cooking Squash
The following works for any winter squash - from acorn squash to pumpkins. Acorn squash, being smaller, will take far less time to cook. Excess squash reheats readily and can easily be placed in a freezer bag and frozen.
Cutting Squash
Many squash have extraordinarily hard skin. Use a large, sharp knife and use common sense when cutting open a squash. If you are unable to cut a squash in half, you may soften it by puncturing holes in the squash and using the microwave.
As easy as (pumpkin) pie!
Most winter squashes can be made into a pie. However, we can safely eliminate acorn and spaghetti squash from possible candidates. Varieties that are particularly good at being adapted to pies are Long Island Cheese, Amish Pie, Musquee de Provence, Australian Butter and Kikuza.
If you find a recipe calling for a can of pumpking just remember this:
1 can = 2 cups cooked pumpkin / winter squash.
Posted by Rob Faux at 4:30 AM