When Things Aren't Going Well - Simplify
I can be pretty stubborn about how we grow things at the farm.  In many ways, that stubborn streak serves us well.  But, with every thing, there must be balance.  And, we have learned to balance our need to show that a crop or a technique or some other thing that we want to figure out with the reality that we can't figure it all out at one time!

We have improved melon production substantially over the past four years in large part because we simplified what we were trying to do.  We cut down the number of varieties we were growing, reduced the complexity of our companion crops and analyzed all of our past trials to come up with one approach that we would try to work from as a base.  In other words, we feel we've built up a foundation of data and ideas through the experimentation and we can now start with a set of 'best practices' in hopes of implementing some of the things we WANT to do in ways that are efficient and practical.

Happily, with the melons, the combination of our experimentation followed by simplification has resulted in a plan that really works with the ideals we strongly believe in:
In 2015, we grew six varieties of melon and one variety of watermelon in our Southwest plot.  I suppose this doesn't sound like it is simplified to many who would read this - but I haven't filled you in on all of it yet!  We planted companion flowers in rows between varieties.  These flowers were zinnia, borage, bee's friend and calendula and they served as attractors for beneficial insects/pollinators.  The taller/tougher flowers (borage and zinnia) were put between the melons that tended to vine aggressively in order to 'wall them' into their area.  We also planted wide rows of buckwheat and sunn hemp. 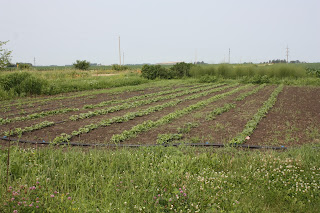 The field was weeded/cultivated three times and we will 'weed' it a fourth time as we clean up this Fall since some tall weeds always manage to get through it all at the end of the season.  Production levels for Oka, Pride of Wisconsin and Eden's Gem were quite good.  Hearts of Gold was also fine, but we missed our timing on a pick and didn't catch many of them before they broke open.  Boule d'Or showed some promise in a short row trial.  Ha'Ogen, of all the melons, did poorly.  But, we love its taste so much, we are willing to continue to figure out its needs.

So, how is this simple?
Probably the biggest part of this was the decision to not even try to make every square foot of this plot productive for melons.  We planted the fewest row feet of melons we ever had and had record production numbers this year.  It is so easy to look at prior year production numbers and extrapolate them to greater heights if you just add another hundred feet of production.  The truth of the matter is that each farm has a 'right size' for each crop and the best way to simplify is to recognize and implement a plan that fits that right size.

Finding the right size can become difficult when the variables change, which happens every season on our farm.  The good news is that most variables will not change that right size terribly much.  But, major changes, such as a new 96 foot by 30' high tunnel, or a new tractor with implements can certainly help to increase that area.  And yet, I am telling you that we had record production by reducing the growing space even after adding a new tractor and high tunnel over the past three years.

Does this mean I don't think our practices are scalable (able to be used in larger operations)?  No, I strongly believe that they can be. But for our farm, the balance of our resources with all of our other crops seems to be dictating right now that this is the right size.

So, the next steps are pretty simple.  We must answer a couple of questions.  How can we tweak what we did this year so we can avoid losing half our Eden's Gem plants and most of the Ha'Ogen and how can we manage harvest so we don't lose perfectly good fruit because we missed a harvest time?

In Need of Simplification
We have some crops that are currently in need of simplification (so to speak) beginning next season.  Many of these are crops we have had success with for many years, but we feel they are no longer performing as they once did.  What we need to remember is that the right size and right practices will also change for things that we grew well prior to some major variables on the farm changing on us.  It would be silly of us to expect that we wouldn't also have to adjust how we grow these things too.

And, as with anything that you've done for a while, there is some house cleaning to be done.  Why, for example, do we grow Cocazelle and Costata Romanesco zucchini?   It started as a trial five years ago.  I suspect we should be able to make a decision by now, don't you think?  And, do we really need to grow six 180' rows of cucumbers?  We are certainly able to do it, but we have trouble keeping up with the picking given our current situation.  Or, is it worth it if only to have lots of cucumbers to feed our birds later in the season?

Oh - and if you're worried that things at our farm will ever get too simple you only need to remember one thing.
It's us.