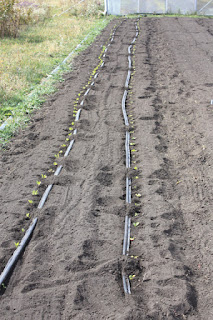 Don't Forget Tools You No Longer Favor
Each year, we do things a bit differently than those that went before.  Sometimes, a technique or a tool falls out of favor simply because we have found what is, in most cases, a better way to accomplish the same thing.

Drip vs Overhead Irrigation
For example, we use drip irrigation for most of our watering needs.  Drip irrigation gets the water to the base of the plants, it doesn't inadvertently water a bunch of weeds and it reduces water use.  At one point in time, we would rely on overhead watering for crops that could handle it, such as vine crops.  Part of the reason for it at the time was that we were going through years that stayed pretty wet AND it does take a little effort to learn what all the parts are for drip irrigation and how to use them.  Overhead sprinklers are easy to purchase and hook up to any garden hose.

Once drip irrigation took hold on our farm, we pretty much let our overhead sprinklers get buried in our equipment building.

But, what happens if you want to establish a cover crop and the rain goes away?  This is a perfect time to use that overhead system (sadly - we couldn't find ours in time).  And, the second time it would be perfect is when we need to prep a Summer/Fall planting and the soil is too dry or hard to work.  Anyone who gardens knows how a gentle rain can loosen up the soil for you.  While overhead irrigation isn't exactly the same, it can do some of that work for you. 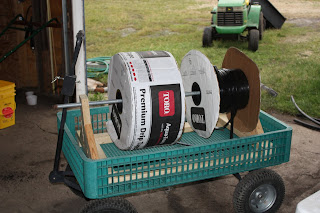 Row Hills
Another technique we've abandoned that may make a comeback are 'row hills.'  As gardeners, we were raised using the technique of making hills for vine crops such as cucumbers and squash.  When our need for volume increased, we had to move to rows.  Early on, we would use a garden rake and rake up a long hill and plant seed directly into that hill.  It worked, for the most part, except the time needed to rake 200 feet for a long hill would be prohibitive (and tiring).  Row hills help keep the plants out of pooled water when Spring/early Summer is very wet and it allows the surrounding soil to warm more quickly.  On the other hand, weeding is quite a bit more difficult.

Now that we have a tractor and a bar with a couple of disks, we can create a row hill (aka an unshaped raised bed) that accomplishes the same thing, but only takes a couple of minutes to do.  The "hill" is wider and doesn't need to be as steep, which should allow for mechanical cultivation and wheel hoe use close to the plants.

In the interest of full disclosure, we have tried this once, but success was limited because we didn't have enough control on the lift bars with our older tractor.  The disks were either all the way down, or they were out.  The resulting beds were too steep.  And - to top things off - we had a very dry season that year.  With more experience and tools at our disposal, things should work much better.  Our intent is to target the fields that tend to be wetter, regardless of crop type.

Paper Mulch
Paper mulch is expensive, as compared to plastic mulch, but we prefer it because it is more in keeping with our ideals.  However, the issues we had with paper mulch in 2014 pretty much discouraged us from using it at all in 2015.  We fully realize that conditions were perfect for the early destruction of the paper mulch last year, so we'll not say "never again" to this tool.  But, the increased use of our flex tine cultivator and the potential for row hills won't necessarily see us increasing paper mulch use significantly on the farm. 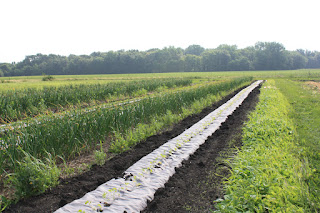 We did, however, use some paper mulch in our tomatoes this season.  We were aware that there was a strong Canadian Thistle presence in our tomato plot and we knew from experience that straw mulch will not suppress it for the season.  We also know that we are not able to expend labor pulling those thistles once we hit August.  And, if they get any purchase in the field, the tomato yield will drop and so will the crop scheduled for the next season.

So, we put paper mulch under our straw in a couple of rows to see how that would work.  And, happily, the thistles have not yet made a strong appearance in that area.  Now, we have to consider if this is a cost-efficient use of this tool.  If crops next season don't have to fight the thistles in that area, I might be tempted to call it a win.

The other thing we noticed is that there was a much higher seedling death rate for Eden's Gem and Ha'Ogen without paper mulch this season.  At least half of the Eden's Gem survived, so we had a decent crop.  Very few of the Ha'Ogen survived.  We suspect that if we want better success for either of these, paper mulch might have to be in the equation.  Our prior research has also confirmed that Golden Zucchini prefer paper as well.  So, the question is still whether any of these crops will provide enough value in return to make the paper worth the investment.
Posted by Rob Faux at 5:30 AM