Admit it - This Belongs in One (or Both) of the High Tunnels
One of the things we do not like to do on our farm is put all of our eggs (or even all of one crop) in one basket.  In other words, we like to split our crops up and not become to reliant on a crop being in one field or having only one succession.  It has become clear, however, that there are some varieties or crops that we should pull out of open fields and grow exclusively in our high tunnels.  The good news about this?  We have two high tunnels, so we can still hedge our bets with different locations, soils and succession times.  So, we still follow some of our key strategies. 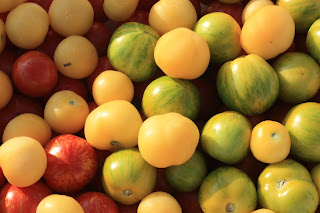 Snack Tomatoes
Next year, we will not grow any snack tomatoes in the field.  Some might call these salad tomatoes, but we've gotten used to calling them snack tomatoes.  At GFF, we recognize that we don't usually have time to pick cherry tomatoes, but we can manage these.  Sizes are typically .15 to .25 pounds each.  We focus on four varieties: Red Zebra, Green Zebra, Jaune Flamme and Wapsipinicon Peach (#1 Veg Variety in 2013).

Over the past three years we have had excellent production in the high tunnel for each of these, with per plant production numbers that make us very happy (Red Zebra - 94/plant, Green Zebra - 60/plant, Jaune Flamme - 105/plant, Wapsi Peach - 110/plant).  In their best years in the field, plants *might* reach 50 marketable fruit per plant.  But, more typically, we will get 30 per plant.  Many fruit from the field just do not pass the quality test, so go direct to birds or suffer from "hand to mouth disease."  If we move these plants to the high tunnels, we can grow fewer plants for the needed production AND spend more effort helping other field plants get what they need, rather than expending effort on plants that won't give us the same return. 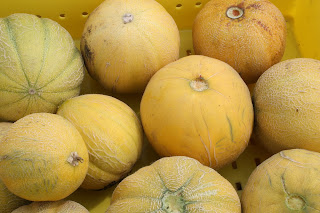 Melons and Green Beans
Other crops that will make a similar move include Jade green beans and Minnesota Midget muskmelons.  Jade green beans are good in the field, typically yielding a pound per foot, which we believe is a good baseline number.  But, when you put these in the high tunnel, it extends the pick season dramatically and you can get 2.5 to 3.5 pounds per row foot.  And, these are high quality beans.

Minnesota Midgets produced over 220 melons in 65 row feet this year, which is in line with our trials over the past two years.  Field trials were never so promising.

The result of this brainstorm is that we'll run a row of Minnesota Midgets in each building and we'll grow three rows of Jade between the two.  Black Valentine will take Jade's place in the field since we can harvest them for green beans if we need them, or we can let them go for dry beans if we don't. 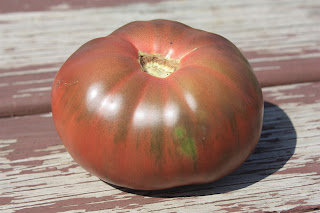 Black Krim Tomatoes
And, last, but not least, are the Black Krim tomatoes (#4 Veg variety in 2012).  We are thoroughly convinced that Black Krim is the tastiest tomato we grow at the Genuine Faux Farm even though it didn't win our tomato tasting in 2014.  The smallish plants can be reasonably productive in the field with fairly short trellising.  But, if the season is a bit wet, you're not going to be very happy with Black Krim.  It definitely prefers arid conditions - just like the kind you might find in.... hm.  Maybe a high tunnel?

The tomato you see in this picture is a 'perfect' Black Krim.  There are no cracks or blemishes.  It probably weighed in between a half pound and 2/3rds pound.  The color was tremendous and the taste was out of this world.  While every Black Krim out of the tunnel will not reach this level of perfection, they sure do approach it far more often than in the field.   And, like many thin-skinned tomatoes, some will split in transit - but that won't stop a Black Krim tomato lover from taking it home and consuming it immediately.  With only five Black Krim plants in our high tunnel this year, we have already pulled in 131 marketable tomatoes.  We admit that this number has gone up each year, but we attribute that to continued improvements in high tunnel management. 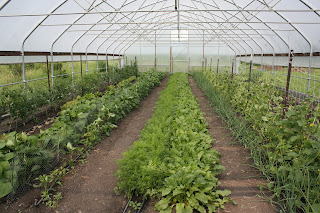 Other Success Stories
Growing in a high tunnel environment has a learning curve, and if you are a grower who doesn't admit that you have adapted how you do things over time in response to what you've learned - then you are a grower that needs to reassess how you evaluate success.

Clearly, one strategy for us is diversity in the high tunnel.  We've played with combinations and have found that tomatoes and lettuce work well, onions and melons are good and carrots/beets seem to be fine.  The pepper/bean combination might need to be reassessed, however.

Part of our strategy over the past several years has been to identify crops we often have trouble with in the fields that might benefit from a more controlled environment.  For example, we often have trouble hitting the window for a good beet crop in the field.  So, for the first time ever, we planted Golden Beets in a bed with carrots (center row).  Both crops were a success.  But, we also readily admit that what the high tunnel did was increase our focus on these crops and their needs, while removing some of the variables that occur outside.  We suspect that we will see increased success in our field beets, just as we saw improvement in the carrots once we trialed them in the high tunnel.  However, we're still quite willing to hedge our bets with some carrots and beets in the high tunnel next season.  After all, those Golden Beets were awfully good.
Posted by Rob Faux at 5:34 PM