What's Going on With the Farmers?

Oh my goodness!  Another blog post?  And so soon?!

Well, let me fill you in (again) on a little trick we have with this blog.  During the Winter or during really nasty weather, Rob will start a batch of blog posts.  Sometimes, it's just a short one line idea.  Other times, the post is mostly done, but it needs editing.  The prior post on endurance is one such post.  It's been in the works for a while and since I had thought of that topic again I was able to finish it up and update it to the present and put it out there.  I do take the time and 'update' these posts so they don't seem out of sych with everything else, but it sure does help to have a few well on the way to completion. 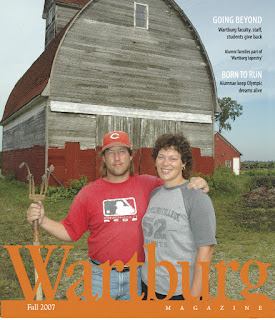 This post is really a batch of things that might not be completely farm related, but we thought we'd share them with you.  Why?  Well, they are odd little things about Tammy and I that have been going on recently.  Since we are personal farmers for many of you and personal friends of others who read this - consider it a way to keep you up to date.  If you read the blog because it is interesting, perhaps it will give you insight on the people who bring it to you.  Or not.

That's PROFESSOR Tammy to You!
A significant chunk of time was spent by Tammy in December and January putting together a folder for promotion to Full Professor at Wartburg.  Rob was given the honor of reading and editing, which also ate a good deal of time.  During the process, I was struck with exactly how many things Tammy has accomplished during her tenure at the college.  Pretty darned impressive if you ask me!

Apparently, those who reviewed the folder agreed with me.  Tammy was promoted to Full Professor, which doesn't surprise me at all.  Of course, Tammy was a bit nervous about it because that's what you do when you're waiting for the answer with respect to something like that.  You can have confidence that you've done what you should, but there is always the possibility that something unforeseen might happen.  Well, it didn't and all is well on this front.  Congratulations Professor Tammy!

Choo Choo Cha Cha
Earlier this year, I had a conversation with someone who was telling me that they liked the board game called Ticket To Ride.  It just so happens that I like that game very much and I mentioned to them that some people play that game competitively.  Of course, they looked at me like I was insane.  Then, I informed them that I played competitively in international tournaments.  Even with someone backing me up on this, they couldn't believe it. 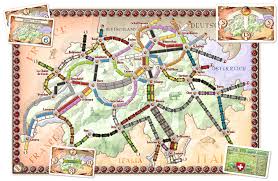 Well, believe it folks.  I play primarily in the colder months (of course) and I participated as part of the USA Team I for the Nation's Cup team tournament.  USA Team I beat France Team I in the final and was the first US team to win the Nation's Cup since it started (2008, I believe).  It was great fun to be a part of that accomplishment.

Even more recently, I played in the Swiss Map Championship.  In this case, it is not a team situation.  I was able to get through the round robin and into the playoffs.  After beating one German in the quarter finals and another in the semis, I was able to hold on and win in the finals against a French player.

I actually know, respect, and get along with all of these people I played against.  I realize I make it sound like it was an impersonal event, but the competitive community only consists of 200-300 people at most.  And, those who participate at this level at least know of each other.

A Hand in Pain Can't Easily Lend a Hand 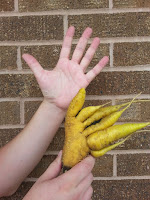 This isn't really supposed to be a good news / bad news thing, but it will sound a bit like it.  We were working in the Poultry Pavilion this Winter and Tammy took a bit of a fall on some ice.  She hooked her hand on some metal as she fell and injured her hand.  It's been bothering her since, making typing and writing very difficult - not good since she does a good deal of that for her job at Wartburg.

She's been to see a hand specialist now, but the insurance company has seen fit to give us some hurdles in this matter.  Wouldn't that figure?  In any event, the most recent effort to help it was a cortisone shot.  If it works, great.  If it doesn't, we're not sure where it will lead.  Either way, she's not going to be able to help with a number of things on the farm this Spring.  We'll figure it out, we just need to adjust - just as we always do.

We don't bring this up for sympathy.  Instead, we're hoping that by putting it out there, we can begin preparing to make adjustments as they are necessary.  One of those adjustments might be to call a Tom Sawyer Day early to help get a few Spring things done.  So, stay tuned.

Goodbye Cubbie Cat
We know at least one person who will be very sad to hear that Cubbie, the Mighty Huntress at GFF, left for the hunting grounds in the sky this Winter.  Cubbie was 13 or 14 years old, which is pretty darned good for an outdoor cat.  We've actually brought her in for really cold Winter nights for the past few years and were ready to bring her in as the weather turned cold in December.  Sadly, she disappeared the day before we tried to call the outdoor cats in.  Mrranda and Sandman were there, but Cubbie was not.

We're going to miss Cubbie.  She really knew how to show that she liked getting skritches and she really COULD catch AND eat a full-sized rabbit.  She traded down to half-sized rabbits the last two years, but it was impressive to watch her catch one.

Hello Soup!
Oddly enough, about the time Cubbie disappeared, a new calico kitty arrived at the farm.  She seemed pretty friendly and she didn't start fights with the other cats by default.  They don't particularly like each other all that much, but it's not like WW III either.  We started to call her Super Cali the Fragile Mystic, but have shortened it to Soup.  Why not?

Soup will, unfortunately for us, become Soup and the Souplings since she was apparently 'with kitten(s)' when she joined us.  I've always wondered about that terminology.  If a woman is 'with child' when she is pregnant with a single baby, what do we say if there are twins or triplets.  And, since a cat is unlikely to give birth to only one kitten....

In any event, we are not prepared to expand our cat population by all that much, so stay tuned about possible opportunities for interested persons to obtain kittens.

And, finally....  Whaaaaaaa?!?
We saw this Non Sequitur cartoon and had to look at it more than once.  Oh my.