One of the things that we do in order to help us keep track of things is create lists.  In fact, if you want to see our theories about 'to do' lists, you can look at one of last year's posts on the topic.  Or, perhaps you should just put reading that post on your own "to do" list.  And, if you're smart, you'll go read that one and THEN add it to your "to do" list so you can cross it off right away.  Instant gratification.

This year, Tammy and I decided that we needed a better name for our daily/weekly plans rather than "to do lists" or "daily plans/weekly plans."  We don't want to be boring you know...

VAPs for GFF
So, we have decided to call these things VAPs.  And, in the weekly case, they are WVAPs.

Of course, you can figure out that the "W" stands for "Weekly."  The VAP part is short for "Very Ambitious Plan."  But, since we are not ambitious enough to say 'ambitious' each time we refer to our daily or weekly lists, we now say "VAP." 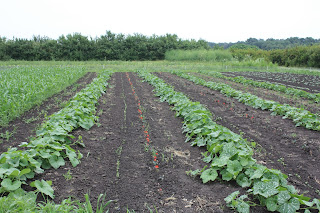 VAPomatics - Statistics for the Farm?
The great thing about a VAP is that it almost sounds like one of the various abbreviations used for baseball statistics.  In fact, I've been considering adding some statistics to our farm as it relates to the VAP.  Maybe a VAP Completion Ratio (VAPCoRat) so we can have a statistic that determines how well we do completing most of our VAPs.  Since each line item has a different difficulty level, we might have to come up with a VAP Difficulty Rating (VAPDifRat) and then we can come up with a Weighted Completion Ratio (VAPWtComRat) so we can compare days that have a shorter list of items (but some very difficult) with a day that has a longer list of things with less difficulty.

One of the things we also do is record what actually gets accomplished during the day.  Some of this is important for organic certification.  For example, if we apply composted manure to a row, then it needs to be recorded.  Some of it is important for future planning.  It could be useful to know that it took three days with two workers to spread straw mulch in the tomato field.  Clearly, as long as an item is ON the VAP, we can record that it was done by simply checking it off.  Simplicity!  Sometimes, I might also have to record specific details (irrigation ran for 2 hours, etc), but that's ok.  It's all part of doing business on the farm.

Discovered VAP Items
But, with any list, there will be 'discovered' VAP items.  These are things that either were forgotten when the list was being made and rediscovered as the day progressed, things that were uncovered as being necessary to do in order to do something else on the VAP or something we just decided to do because.. .well... we wanted to do it.  Oh... and don't forget the things that became necessary for whatever reason (woodchuck getting into the brassica again - better get that electric fence fixed up). 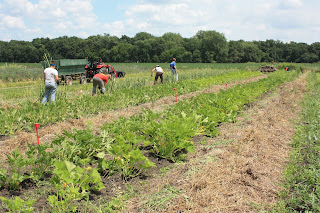 CarryOver VAP
By their very nature, VAPs rarely have a 100% VAPCoRat.  What? you've forgotten your VAPamatics already?  Ok.  VAP Completion Ratio.  So, with every VAPCoRat under 100%, there will be uncompleted items on the VAP that will carry over to a future VAP.  This leads to several new and exciting potential statistical categories!

VAP Carry Over Ratio (VAPCarOvRat) is the ratio of items that carry over from day to day.  You might be temped to say that this is all of the items on a VAP that didn't get completed.  But, this would be incorrect.  If the next day is a harvest day for CSA, then many of the uncompleted items from the prior day won't carry over directly.  They may move to another day.  These would belong to...

Sometimes, an item keeps showing up on a VAP and just doesn't get done.  So, each item could be given a Carry Over Number (VAPCON) that counts the number of times an item has been deferred.  Just think of all of the neat-o stats we could make up on that one!

Then, there are the items that build up a big VAPCON (lots of deferrals) only to get to a point where doing that item is not longer pertinent.  Hmmm.  We've had plant the pine tree on there since May and it has a VAPCON of 200.  I think the ground is frozen now.  I can't decide whether this should have a statistic called VAPOopsRat or VAPMehRat or maybe VAPWWYTRat (VAP What Were You Thinking Ratio)?  Perhaps we could have a VAPWWYTRat Red Flag Warning for the farm....

Watch out for the OAP
If the number of items with high VAPCONs is ridiculous and your VAPWWYTRat is high enough to warrant a farm-wide Red Flag Warning, then you are probably not actually dealing with VAPs.  Instead, you have succumbed to the temptation of creating OAPs (Overly Ambitious Plans).  And, we all know what that leads to...

Email ThisBlogThis!Share to TwitterShare to FacebookShare to Pinterest
Labels: Excuse me sir - you appear to be listing, general strangeness and minions, Paint by Number, VAP, X-games