Why'd You Call Me a Drip? (Revisited)


Back when this blog was young, I created a post titled "Why'd You Call Me a Drip" that discussed the stages of wetness your farmers periodically encounter as a part of their job.  Rather than link you back to it, we're just going to modify and update what was there for your reading pleasure! 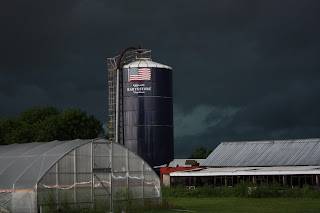 We have a new(ish) weather station on the farm and we think it lies.  Either that, or it doesn't take too much rain on our farm to make it ridiculously damp.  To be fair, the weather station resided in the high tunnel during its first couple of months on the farm last year.  Needless to say, it didn't record ANY rain in there.  So, it MUST be accurate.  But, now it is outside and is happily giving us reports of all things weather related.  Don't get me wrong.  We do like this weather station very much and find it to be reliable.  It's just that our human perceptions don't always line up with what it reports.

However... when your shoes are making squishing sounds with each step and your jeans are five times heavier than they were when you put them on, you may have entered the "Fifth Stage of Dampness" (see below).


The Farmer's Guide to the Stages of Dampness

Stage the First
You see it coming and you rush to complete whatever you are doing in hopes of getting it done AND getting in before the rain hits. Adreneline rush time.  You might feel a random drop or two at this point, but it isn't really raining.  Most of the moisture comes from your own person as move quickly.  The last fifteen plants you are putting in get jammed into the ground in rapid succession.  You try to nab the final 20 bunches of kale before the rain catches you.

Exception to Stage the First - Threatening Weather
You see it coming and you see something that you really don't like.  Maybe heavy lightning or a squall line of some kind.  Depending on how much time you *think* you have, you and the workers grab all of the tools and get them back in.  High tunnels get closed up, windows get closed up and everything and anything else that needs to be dealt with gets dealt with.  The irony here is that the farmers usually recognize these situations in time to get things battened down and get themselves under shelter before they hit much more than stage two... unless... you see something you forgot and you go back out into it.  In that case, we normally skip right to Stage the Fifth. 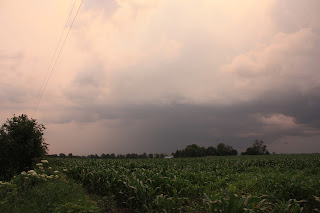 Stage the Second
The rain starts and you rush to get anything undercover that really must not get wet. You feel every drop of rain and you might even see steam come off of your shoulders as the cold raindrops hit you.  Sometimes you can't help but let out a bit of a yelp.  Cold cold cold COLD!

If you haven't completed your task that you really needed to get done and there isn't anything that really needs to be moved under cover (should that radio still be out here?), then you keep working.  You're still moving quickly in hopes that you won't get any wetter.  Perhaps it will stop?  At this point, there is hope that you won't get all that wet and a change of clothes will not be necessary.

Stage the Third
You are damp, but there really is 'just a bit' more to do and you really don't want to leave it (or can't leave it). So, you keep rushing in hopes of getting done before you get too wet/dirty/both.

The soil starts to get a little sticky and you notice that you are now a couple of inches taller than normal as your boots/shoes collect some dirt that you can later bring into the house with you.  You have started to use your jeans more frequently as the portable rag that it is.  You are starting to realize that whatever it is you are harvesting is going to have a little mud on it that will need to be cleaned off before it is delivered.

If you are planting, you have to quit at this point.  Seeders get jammed up.  Plants stick as readily to your hand or planter as they will to the dirt.  Weeding can continue until you have too much mud on your hands to grasp weeds properly or you spend more time cleaning the blades on your tools than you are weeding.  How many of you have tried to pull wet crab grass?  Ya.  Not happening at this point.  so, planting and weeding means we quite and start bringing things in.  We just *might* avoid the next stages of wetness.

Stage the Fourth
You can still get a little bit wetter, but there really is no more hope of getting done and in before you have to change to new clothing, etc. As a matter of fact, if you stand up from a typical harvest position, you will discover your remaining dry spots on your person.  Your back is pretty well soaked and you probably have water dripping off the bill of your cap by now.  You've either decided that the rain isn't as cold as it was or you simply don't care at this point.  The pace slows down, it really doesn't matter how fast things get done anymore. Part of you accepts that being in the rain can be somewhat pleasant - except if it is a downpour - or there is lightning and/or heavy winds.

The ground has moved from tacky to slippery.  Part of you still worries about slipping and falling.  The other part looks at the jeans you have been using as a rag during the rain event thus far and you wonder if it would make a difference.  Your shoes are heavy and your shirt is plastered to your back.  Some point between stages three and four you had the unpleasant experience of the first drip or two of rainwater running down the small of your back and into places we won't mention on a family blog. 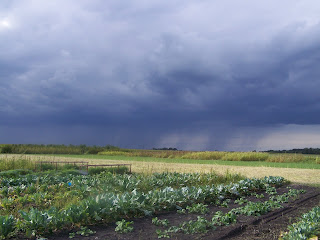 Stage the Fifth
There is no way you can be wetter - even if you submerged yourself in a pool. You could wring a few gallons out of your underpants if you had to. At this point, you only keep picking because you have to - and it still doesn't matter if you go in. The only thing that stops you is if you will be doing more damage to the crop and field than you should. Even then, you keep picking if there is a deadline to meet. The rain is no longer annoying. The issues listed above no longer bother you. This is likely because you have reached a stage of numbness that is known by CSA growers, truck/market farmers and other folks who have to perform tasks in this sort of weather once in a while.

Oops.  Farmer Rob just remembered the little notebook he keeps in that side pocket in his jeans.  Well, we'll just have to get a new one and hope this one dries out enough so he can decipher the notes later when it dries out.

The farmers finally get themselves inside and try to figure out how to take off the soaked clothing.  The only thing worse is trying to put on dry clothing.  If you reach stage five, it almost seems as if your skin won't dry off easily.  It's a disturbing feeling to have a clean (and dry) t-shirt rolled up and stuck as you attempt to pull it on.  We won't even talk about the underwear you're having trouble with.  Oh.. .and the SOCKS.  Ugh.

Recent Events
Over the years, we have gotten better at getting things done before the rain hits.  But, when a more severe system hits, we find ourselves running around in downpours (some of them sideways) in an effort to take care of things.  We recently had a system move in from a direction we aren't used to watching and it forced Rob and Tammy to spend some quality time in sideways rain while they worked to shut down the high tunnels.  Sometimes you just have to have a good Stage Five Dampness to make the day complete.
Posted by Rob Faux at 1:49 PM

Email ThisBlogThis!Share to TwitterShare to FacebookShare to Pinterest
Labels: general strangeness and minions, Look in the Mirror, Spring Sproing Sprung