The C in CSA is Community

We asked for help - even using our blog to explain what we needed to do.  And, happily, we got ALL KINDS of help!  If our count was correct, we had at least 20 people come to help us put new plastic on Eden, our older high tunnel building.

Our thanks to those who were willing to take and share some pictures and to those who willingly took our camera and took pictures as well.  And, of course, many thanks to all of you who came and helped.  We realize that it didn't always seem like you were doing much.  But, your presence was critical to make sure the plastic stayed where it was supposed to stay.  The results were fantastic.

Tammy and I managed to get the plastic off of the high tunnel on Saturday.  It was a bit windy, but we were able to get it cleaned off and get things largely prepped prior to Sunday.  We got the scaffolding up on both ends, gathered tools and supplies and were pretty close to ready to go at 7:30am on Sunday.

There were a few brace bands that needed to go on prior to the plastic being pulled, but after that, we were ready to go.
We had a couple people on each peak, standing on scaffolding.  We had three people pulling, one person in the middle to help get around any snags, one person on the South scouting and the rest were in positions to try to keep the plastic from getting caught on anything as we pulled it over.

That means we had people between the plastic and the building on the North and South sides.  Do you remember playing with sheets and making a fort in the living room?

Well, there you go.

You might notice the picture on the right.  If you look VERY carefully, you can find Farmer Tammy.  It might help if you click on the picture to enlarge it.

People on the ground kept the plastic on the North and South from lifting up and the people on the peaks worked to pull the plastic as tight as we could get it.  Once we felt it was tight enough, we put wiggle wire in to hold both peaks.  We followed that with putting some wiggle wire on the hip boards in the middle.  Then we worked towards the corners, trying to get rid of any wrinkles as we went.
Once we had that connected we could use wiggle wire to attach to the roll-up bars.  Since this was on the ground, we could give lots of people a chance to try their hand at wiggle wire. 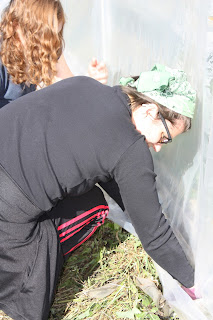 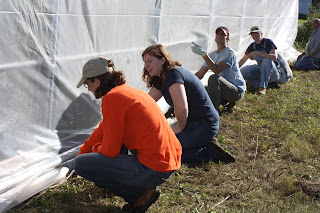 After we all decided wiggle wire is cool - if slightly dangerous for the eyes if you aren't paying attention (no, no one was hurt) - we herded everyone together for a picture.

And, of course, people were now hungry.  So, there was food.  After all, this IS a farm you know.  There is food there.  That is a good thing.
And, now, we are ready to grow more good food in Eden.  In fact, the following Tuesday, Rob was able to pull Golden beets and lots of snack tomatoes out of this building.  Here's to several more years of Eden being the farmers' happy place.