The Difference a Year Makes

It is mid-August and the farmer is taking a few moments to take stock in the way the current season is progressing.  This is a normal occurrence and has happened before.  One example might be this post from 2015 that actually led to mid-season variety awards.

Oddly enough, I've actually spent less time assessing this year than I have some years.  I am still recording data, so the evaluation is bound to come at some point.  But, the energy is going elsewhere this season up to this point.

If there is one thing that might encourage me to do some mid-season analysis, it is a crop that is doing well.  Yes, a crop that is doing poorly also gets me to do mid-season analysis, but I'm not always willing to publicly share that analysis while I am still feeling the sting of failure!  Though there are times when the failure leads to a brain-storming session that might lead to a post sharing some of the results! 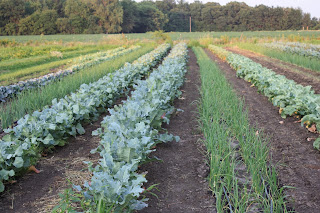 Broccoli Doing Us Proud
We participated in a broccoli trial last year with Practical Farmers of Iowa after having had a couple years of consistent production.  What happened in 2016?  Well, it was just a pitiful broccoli year on our farm (and on many other Iowa farms, it turns out).  Since we had recent experience with success, it didn't make sense to overhaul our approach to broccoli.  Instead, we simply rededicated ourselves to the crop and our strategies for growing it.  The results so far are very good.

The downside of re-dedication to one crop is that fact that your time and energy have to come from somewhere.  Often, it is at the expense of another crop.  This year, it looks like the melons are suffering from our lack of attention (among other things).  But, that's for another blog post.

The average size of our broccoli is a bit bigger than it has been.  In 2014, the average head of broccoli weighed in at about 9/10 of a pound.  The following year, the average head weighed a pound.  So far this season, our heads of broccoli average 1.1 pounds.  We do not collect individual weights, so I can only report that the reason for this increase seems to be more the fact that there are some giants coming in from the field along with all of the other heads of broccoli  Spot checking tends to yield a weight right around a pound for most heads this year, so I think that theory holds water. 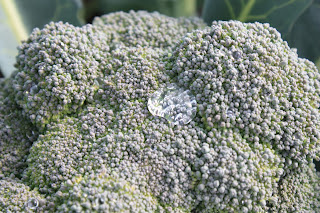 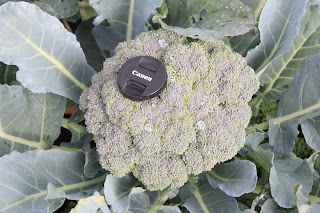 Other than favorable weather for broccoli growing in our part of Iowa, we can trace this year's success (knock on wood) to a few things.  First, the broccoli landed in one of our better fields this year.  Last year, it was in a field that has a history of problems.  In fact, we're looking at removing that field entirely from our production rotation.  The weed pressure continues to be difficult in that field and the soil type is clearly different.

That doesn't take into account the fact that there were issues for many other growers in our area with the broccoli.  So, we do have to give some weight to the theory that some years just don't favor certain crops.

Perhaps the most important aspect is the level of importance we put into maintaining the crop.  In a highly diversified and small-scale growing system such as ours, resource limitations can play a larger role in crop success (and failure) than they might otherwise.  Clearly, broccoli is an important crop for us because many people like it and it is an easier veggie for us to find a market for excess.  It was important enough that we weren't willing to accept 2016's 95 pounds of production and we put this crop at the top of transplant, irrigation and cultivation lists.  Simply put, that field looks fantastic and some of the reason for it lies with the farmers and the crew.

High Tunnel Tomatoes
Then, there is a crop like this one.  It received high priority last year, just as it has every other season we've grown tomatoes in the high tunnels.  We didn't really do anything hugely different this season either.  And, yet, we are already seeing results that look like they will exceed last year's poorer showing.  For example, we have already gotten as many of our wonderful Black Krim tomatoes off of five plants in Eden (our older high tunnel) as we did for the whole season last year form six plants.  The average fruit size is nearly a quarter pound larger AND if hadn't been for an issue with worms boring into some of the earlier fruit, the numbers would have been even better for this season. 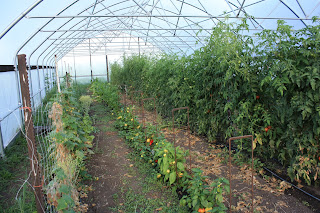 Our Valhalla tomato production has not started yet, but that's by design.  We want those tomatoes to peak later so we can run them into November more easily.  The plants look fine at this point, but there's no knowing until the fruit start coming in.

This brings up a couple of questions:
1. Was last year an aberration or is it this season?
If we look at numbers from 2014 and 2015, we harvested 32.0 lbs and 39.3 lbs of marketable Black Krim tomatoes per plant grown in the high tunnel environment.  In both cases, we felt like we didn't quite maximize what we could have done with that crop, but we did pretty well.  In 2016, we harvested just under ten pounds of fruit per plant.  One third the production of the prior two years.  So, the fact that we've already exceed 10 pounds per plant this season may not be all that remarkable.  Instead, it seems to show a return to the norm for this variety in our high tunnels on this farm.

2. Is it something we did or did not do?
At this point, I have not been able to put my finger on anything we have done that might account for 2016's lower production and this year's return to prior season numbers.  It is possible that part of the issue is that the West position of Eden has problems with wet soil if we get excessive rains (for example).  But, we noticed a decline in health of all of our tomatoes last year, for whatever reason.  This season has been better thus far for all tomatoes on the farm.

Email ThisBlogThis!Share to TwitterShare to FacebookShare to Pinterest
Labels: Just Veg-ing Out, Look in the Mirror, Paint by Number