Rob and Tammy are saying "farewell" to Ontario after a brief visit to allow Rob to speak at the recent EFAO (Ecological Farmers Association of Ontario) conference and the Farmer-Led Research Symposium.  These events were located in the Blue Mountains just South of Lake Huron's Georgian Bay.
The EFAO staff and the members of EFAO (in particular those who attended the Research Symposium) made both of us feel welcome and let us know that our contributions to their events were of value.  We felt that both sessions went very well and we were extremely impressed by the positive participation levels.  The questions were on point, clear, and worthwhile to consider and discuss.  We feel that, at the very least, participants could leave with better questions to be asking themselves so that they could improve how they farm within their own systems.  And, perhaps, they might even leave with an idea or two that they could adapt and make work on their own farms.

For some reason, we left the camera in the room and didn't pull it out during the conference.  But, since Rob tends to favor pictures of himself like the one above, I guess all is well on that front.  Maybe EFAO got a few just to prove to people that he really did talk?

After leaving the conference, we took advantage of Rob's first trip out of the United States to do a little exploring.

A couple of highlights included...

We haven't really had time to digest all of the pictures yet.  Per the norm, we took several shots in hopes of landing a couple we really like.  This one is nice because it shows nearly the entire structure of the falls area.  The sun came out in patches, so we were trying to catch those moments with the camera as we were able.

After Inglis, we tried to check out Indian Falls and found our way blocked with a flooded path to the falls.  We headed up the Bruce Peninsula and made sure to see Lake Huron while we were there.  Just so we could say we have now seen each of the Great Lakes.

Road construction obscured the access to Jones Falls, so we missed it as well.  But, we pressed on and managed to catch one more site just as the sun was setting.
And we were super pleased we made it in time to visit Eugenia Falls.  Of course, given the opportunity for hindsight, we would trade some of the time spent at Indian Falls hiking back only to be blocked and some of the time hunting around for Jones Falls for more time at Eugenia Falls.  But, we couldn't have known if we hadn't tried.

A couple of other immediate picture favorites came from the Inglis Falls area.  There were some very nice opportunities there for Rob to pretend to be a photographer. 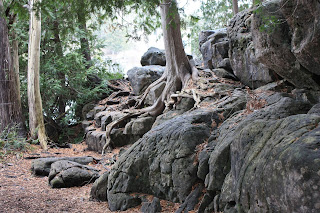 But, more importantly, we took the time to look at things from different angles and to appreciated nature in all of its forms.

Good-bye Ontario.  We enjoyed seeing some of the best you have to offer.
Posted by Rob Faux at 8:59 PM