At the risk of overloading the blog with too much about too much (rain, that is), we thought we'd do a bit more with regards to the wet weather we had to start the month of September (and slightly less wet, but still annoying mid-September).  The post, Rain of Terror, got that ball rolling, so we'll try not to revisit the content there too much.  Instead, we consider this a bit of a documentary post for us with some thoughts of what we can do when this happens again.  Please note that we do NOT believe the phrase is "if this should happen again."  It is definitely preparing for WHEN it happens again.

What got us thinking about this post?  The mundane reason is that I don't have many September farm pictures other than the ones we took after our first batch of heavy rain.  But, as I viewed these, I realized that there might be some lessons here that could be learned for our farm.  I try not to avoid a chance to learn - even if I don't really want to dwell on some of the harder lessons.  The other prompt was the fact that we had ten days after that event without rain - and I was still slipping on some mud in one of our pastures as we transferred broilers to their pasture.  And the final prompt?  It rained again today.  I have to admit that I am a little 'gunshy' regarding any kind of rain right now.

We determined that hilling did, in fact, save many of our crops.  We did still have some issues with the loss of a couple hundred heads of lettuce (among other things).  But, it seems like the late broccoli, cauliflower and romanesco successions will live to try to produce veggies another day.  This process is worth the extra effort on our farm and we intend on refining and expanding its use.  Yet, it did not solve the water problem for many things, which means we have room for improvement.

Before you come to the wrong conclusion - we have used this technique in seasons prior to this as well.  What we're beginning to think is that we may always want to use it for every one of our crops during all times of year.
One of the mistakes we made was having unhilled beds next to hilled beds.  The hilled beds shed water (of course) and might have increased the amount of water in the unhilled areas.  Granted, there was going to be a problem no matter what we did.  But, we shouldn't have relied on the 'normal' late Summer to early Fall reduction in rainfall.  We should have just done the extra work and created the raised beds even though the odds said August and September are supposed to be drier.

There are some plots on our farm where this might be more important than others (like the ones shown here).  So, we could simply identify plots in the rotation that must always have hilled beds and then not let ourselves take a shortcut because it might be drier.

But, why hesitate?  Well, if we raise the beds, they tend to dry out faster.

But, what happens if it doesn't rain?  Then, we have to irrigate more!  And, we are also concerned about responsibly using ground water and not wasting it.  However, the current trends for our farm is for more heavy rain events and wetter seasons.  Since we do have the option of drip irrigation if it should swing the other way, maybe we need to play that hand and see how it works.

If you look closely at the picture at the right, you will see that the seedlings in this picture are completely under water.  Usually, a mid to late August planting of turnips on our farm will give us some nice small to mid-sized turnips that people seem to like.  None of these made it through the rains.  I guess they weren't into the 'hydroponics approach.'

The next thing we may want to address is that some of our non-growing areas could be candidates for swales.  For example, the picture below shows the edge of one of our fields and the grass/clover path between it and the bush line.  Clearly, we are seeing plenty of water sitting there and all of the beans on that edge are no longer with us.  However, they are still doing reasonably well about 10 feet in from the edge.  Perhaps we should consider lowering these edges and replanting grass/clover (and maybe some perennials covers that can handle damp situations.  We have multiple opportunities to do this since we have permanent greenways between each of our field plots.  The thing that stops us is finding the time and resources to accomplish this task.  Maybe we can not afford to not do this? 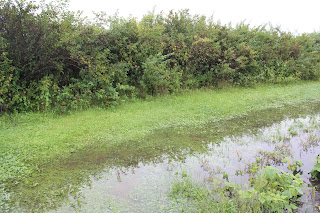 On the other hand, critical paths that get us from one part of the farm to another can't be continuously under water either.  This important junction on our farm (below) nearly got us stuck a couple of times. 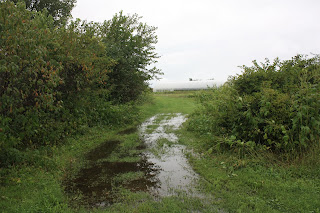 And then, there are pastures.  These are actually a good bit harder to figure since there are so many factors involved - among them is how one does the work on that area when you have birds that have to be somewhere! 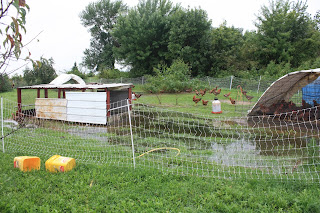 One option is to consider building some semi-permanent buildings on the highest spots so the birds always have a dry spot to start.  The down-side is that chickens really beat on the pasture, leaving the area around their home-base close to bare.  We rested the area close to the Poultry Pavilion this year prior to recombining the flock in their permanent room again for the Fall/Winter. 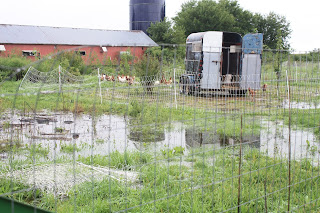 Of course, we could try tiling.  But, we believe a significant part of our current problem is that EVERYONE uses the 'get the water away from me as fast as possible' approach.  That's part of the reason we have been having so much trouble with the heavy rains in our country.  While we only have fifteen acres, it is the attitude that we, as individual farmers, aren't a significant part of the problem.  Sorry, we don't get a pass, nor should anyone else.  We all have responsibility and we're not about to shirk ours at the Genuine Faux Farm.  If we're going to tile, we're going to need a place for it to go.  We've considered the option of creating a wetland or pond area on the farm, but the land we own is a bit small to make it work.

And so, here we are, continuing to find ways to make this work.  And we're not going to wait and save it for a rainy day.
Posted by Rob Faux at 10:06 PM

Email ThisBlogThis!Share to TwitterShare to FacebookShare to Pinterest
Labels: fix it faux, whether wythards