When your work has so much to do with Mother Nature, you have a tendency to take a great deal of interest in any prognostication that might give you a glimpse into the future whims she might have so you can make an effort to plan.  Tammy and I watch the skies and make our own guesses about what might be coming our way.  We look at the radar and other tools provided by NOAA and other sites, such as Intellicast.  We listen to people who have far more training and knowledge than we have when it comes to climate and weather events.  And, even though we know that the tools are just tools and meteorologists do their best to make forecasts based on the facts as they see them - we still can't help getting upset when they are wrong.  We know it is illogical and unfair.  But, we can't get away with blaming Mother Nature because she'll do what she'll do (and frankly, we might be a bit frightened to confront her).  If Mother N reads forecasts, she probably takes delight in chuckling at our attempts but I am guessing it is beneath her to alter events just to spite the forecast.  And, right now, what she is doing is making things difficult.  We are dubbing the current stretch of weather the

If you read our blog semi-regularly, then you have probably noticed that our monthly newsletter posts have a "Weather Wythards" section that summarized the weather on the farm for the prior month.  Our July Newsletter highlighted a wet June with 8 1/2 inches of rain - far more than normal.  More recently, our September Newsletter highlighted a wet August with another 8 1/2 inches of rain - again far more than normal.  In fact, we had recently had some significant rain on the farm and we still had decent sized puddles at the point we saw the following forecast: 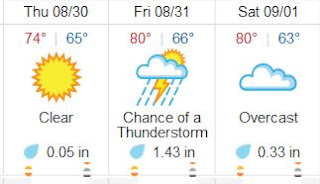 We often try not to get too excited about anything in a forecast much further out than a couple of days.  We were a little dismayed by the significant rain amounts shown here, but we were relieved to see that we could get through Thursday's harvest and veggie deliveries without more rain.  Yes, we still harvested in mud that required much more effort to clean the produce - but it wasn't horrible.  Besides, we were (and are) fully aware that others are having bigger problems with too much rain.  For example, southern Wisconsin has been dealing with flooding and excessive rain for the past three weeks.

This set of forecast icons come from Intellicast for Tripoli, Iowa as we saw them on August 30 and we have learned over time if you get a series that looks like this - things WILL become exceptionally wet - even if not during the exact timeline depicted here or in the amounts shown.  We verified that most sources were calling for wet weather during this period.

Then, an amazing thing happened.  It didn't rain on Friday during the day.  Rob had a chance to work outside all day and try to do things to preempt the problems too much rain might cause.  Caleb was also working that day, so we gave it our best shot.  Tammy came home in time to lend a hand with trying to pull melons out of the field.  But, things get dark much more quickly in September and our time was up.

From 1:58AM on Saturday until 9am, we received 2.74" of rain.  You could argue that the meteorologists were fairly accurate if you add the Friday/Saturday totals together and move them all to Saturday AM.

And then add another inch to it.


Ever hopeful, we looked at the forecast in hopes that maybe Mother Nature had compressed the event and just gave it all to us at one time.  But, it was not to be.  The new forecast had even higher amounts of rain and much higher likelihoods for that rain.  In the end, rainfall totals for the first five days of September made us wonder what we were complaining about when we talked about the wet August we endured.  The crazy thing about is, we are aware of several places that got much more rain than we did!

Our farm is not next to a body of water that would tend to flood us.  But, the soil is heavier and the "water table" is often high.  We are pretty flat out here too, so the water doesn't have anywhere to go, especially when the ground is already saturated.  The net result is that we can get a fair amount of standing water when we have excessive rain events.  Like any farm, we have some places that tend to puddle up with any decent rain.  We have worked to move some of those 'trouble spots' but most are scattered in areas we use for poultry pasture.  The trick is to make sure the poultry buildings aren't sitting on one of the lower areas.  But, what happens when the entire field becomes a puddle?

Something you have to know about chickens - they can be rough on a pasture.  The picture above makes it look like we placed their shelter in the lowest spots because you see more water.  However, you need to consider that the chickens have been beating down the grass in this area more than they have further from the buildings.  Trust me when I say there is just as much water in the green as there is in the areas with visible water.  To make matters worse, these broilers were due to go to the park on Tuesday night.  We had to stop loading half-way through when a cell with significant lightning came through.  After a quick downpour (our weather station recorded a rain rate of 8"/hour), we were able to go back out and finish the job (about 45 minutes later).  Let's just say neither of us is up for doing that again anytime soon. 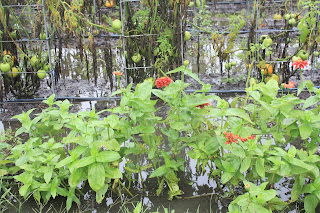 Many of our crops are winding down much more quickly than they would have in an August/early September with average rainfall amounts.  The tomatoes were loaded, but the plants have crashed over the past two weeks.  I guess they aren't fond of being this wet at this point in their development.

We're beginning to think we should have pulled all of the green tomatoes in addition to the ones that were starting to ripen prior to the rain.  A recent scouting effort showed a significant number of them cracking.  Well, what do you do?  You do what you can and deal with it.  That will have to be enough. 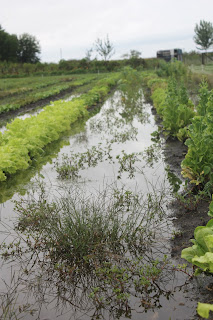 We did take the time to raise the planting zone for many of the rows in our fields this season.  We've done this more and more over the past three years as it has become apparent that excessive rainfall is becoming a new norm for our farm.  Please note that when I say "excessive rainfall" I am not referring to a single storm.  Instead, I am referring to a series of rain events that lead to completely saturated soil to the point that we have standing water for a week or more in areas that are not our normal 'puddle zones.'

If you look at the picture at the right, you can see that the lettuce is up on hills that we created with Rosie (our tractor) and a disc hilling implement.  This does not solve the problem of farmers losing boots in the muck when they try to pick, but it buys the plants just a little more time so they have a chance to survive.  It's a little early to tell if we bought enough time, but at least we gave it our level best to prepare for this situation.

On the other hand, we did not hill every single bed on our farm.  In our defense, it does take more time and effort to make these hilled beds.  Second, rainfall normally gets more scarce the deeper you get into the season.  With the picture at left, you can (maybe) see some of the seedlings that were just coming up at the point the rain started.  These are not planted in hills and they are under water. 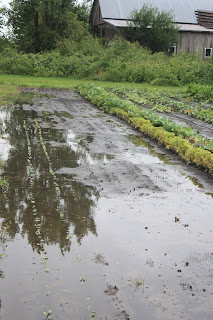 You might notice some yellowing of plants at the right showing an older crop that has not been liking the moist weather even prior to the beginning of the "Rain of Terror."  This picture was taken after a bit of a "break" after the first four inches or so.  I figured it had gone down a bit and wouldn't get much worse.  I was wrong.  But, I didn't have the gumption to take the camera back out to record it.  I've got enough of a picture in my head thank you.  I will say it was odd to see spinach and turnip seedlings looking a bit like plants in a fish tank.  While we are on flat ground, water still moves with the slightest change in elevation.  Those poor little seedlings were moving with the current.  At last check, many of the seedlings were gone.  Now to wait for things to dry out so we can try to seed it all again!

The turkey pasture was looking very good this year.  I think we managed to cut it at just the right time prior to letting the turkeys out on the field.  The key is to not have the grass too tall when they first get out there.  But, you want the grass to be tall enough and healthy enough that it will last into early October.  Unless it rains buckets and barrels in early September.  If the turks don't tear it up, the grass should survive just fine.  For now, the birds have their own private swimming pool.  Some actually liked running around in it for the first couple of days.  They have since decided it isn't much fun. 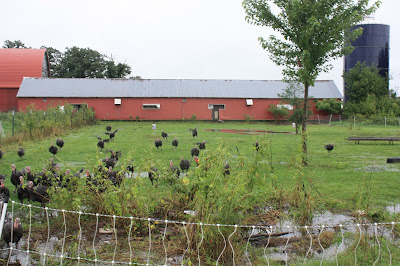 Crazy Maurice, our weeping willow, may be one of the few creatures on the farm that is happy for the excessive amounts of rain. 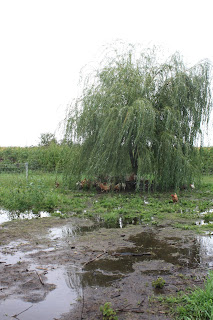 The hens are certainly grateful that he's out there because he does provide some protection for them.  But, once again, hens can really beat things up - especially when it is wet.  Honest, we take care of our birds.  The pasture did NOT look this bad a week ago.  But, we can't move their building.

Where would we move it to?

Who will pull the tractor out when it gets stuck?

How will we get out from under the

Tune in next week when our topic is making sweaters out of toe jam!  (oh! are you still reading?  Good for you!  I hope you aren't too disturbed the toe jam thing, it's really a pretty amazing project.)