The Genuine Faux Farm farmers (Rob and Tammy) needed to concentrate on where the farm is going for 2019, so they reserved a classroom and spent most of a day in that room trying to hammer all sorts of things out.  Some of this was simply an effort for the two of us to communicate our own priorities to each other rather than assuming the other person knew exactly what was going on in their partner's head.

And the results are in:  We done good.

Since our farm would not exist without the support of many wonderful people who purchase local foods and select us to be their personal farmers, we felt it would not be too much to share some of the discussion and results of our 'retreat.'

Big Questions/ Big Projects
Tammy was a little uncertain, at first, of where I was going with our first part of the day.  You see, I like to brainstorm and she does not.  I think that the word choice (brainstorm) was maybe an unfortunate one since the goal was really for us to see if our expectations and priorities for the year were fairly close together. 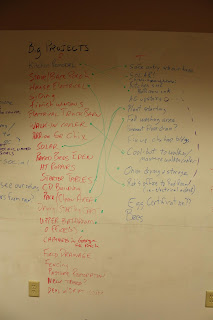 We started off by taking a few minutes have each of us write what we thought were the 'big questions' regarding the future of our farm.  We both wrote at the same time in hopes that we wouldn't influence each other.  We followed that up with the 'big projects' for the farm (and home) as we saw them.

Some people might wonder what good this would do.  As Tammy pointed out, the lists got pretty overwhelming.  On the other hand, if these were all projects and questions that were on our minds, perhaps they were ALREADY overwhelming.  Giving them a name and finding out that we had the same names for many of them was a positive step.  We could at least move on to the difficult, but necessary, step of prioritization.

One result of this process is that we found out that we are on the same page.  This is not surprising because we do talk with each other about things and we did get to spend a sizable chunk of time together during the 'Farmer Break' in January.

One thing that stood out for us was a desire to make significant progress on our old farmhouse.  As some of you know, the kitchen is already started.  But, having no kitchen is a good way to get really disgusted with a house fairly quickly.  So, that project needs to be finished.  There are also issues with insulation, the back entry, the stairs to the basement, the doors into the house, the siding on the house and some windows.  Oh... and we still have one electrical outlet for the entire upstairs.  It's not that we haven't done things to work on this house.  Since we got there we've put on a new roof, new heating, new windows (for most of the house), new electric service, a new well...  you get the picture.  It's an old farm house and it has had its needs.  The weather extremes have been highlighting some other problems and we realize we have to keep moving forward on the house.  After all, we would prefer to LIKE living here versus tolerate living here.

Another project that has been on our minds for years is the idea of adding solar power to the farm.  In a very real way, our farm matches perfectly with the months when solar production is at peak.  We use more power for seed starting and the walk-in cooler during the warmer, sunnier months.  We've taken steps to do this, but usually get stopped.  We're hoping that participation in a 'group buy' just might push us over the edge and into action this time around. 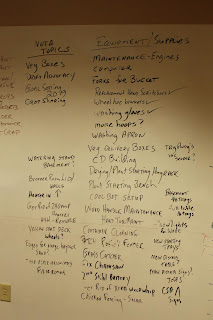 The number of building and repair projects on the farm are numerous at all times, but it seems as if we've had many come to a head recently.  The reality is that we may just be losing patience with the bubble gum and baling wire approach for some aspects of our farm.  Clearly, we can make do without some of these things.  We've been doing this farming thing since 2004 - so apparently we don't HAVE to do all of this.  But, if we want to farm beyond 2019, we believe that we need to make strides towards completing many of these projects.

Of course, we didn't stick with the bigger, more abstract stuff for long.  We worked to identify all of the things we needed to do this season in an effort to begin prioritizing and assigning tasks.  The scary thing about all of this is that these lists run around inside Rob's head all of the time.  Every once in a while, he needs to let them out so he can have room to think about things more objectively.

During these portions we worded together to come up with the list.  Several things popped up that had been forgotten.  Though, forgotten is probably the wrong word.  "Buried" is probably more appropriate.  We'd both let getting forks for the tractor bucket fall off our list last year UNTIL we needed them.  But, they'd fall off the list again UNTIL we needed them AGAIN.  I'm sure no one reading this has any idea of how that feels.  Oh... You do?  Ok, then.

We spent time on identifying our research projects, how we were going to handle labor this year, administrative tasks and...

Figuring Out the 2019 CSA Program
This was probably the thing that was preying on Tammy's mind the most.  We did not have time to finalize anything before we took time off from the farm in January.  That means we have to work quickly this month on what we think will be a program that will adapt to the way people are living now.  We spent some time discussing options and integrating ideas and we think we finally have a solid design.

Now, we have to implement it AND we need YOU to join our program and make it a success.

Here's a preview.  Stay tuned for the grand unveiling! 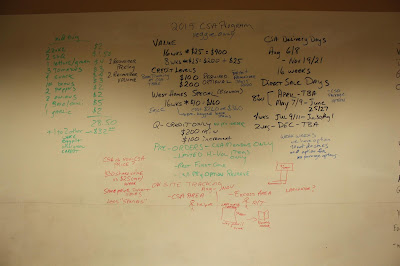