Give the Frog A Name

Blogging 101: When in doubt about what you should write about, start your post with a picture of a tree frog that likes to observe you washing eggs in the basement sink.

In addition to Bob, the green frog that likes to hang out in the water tub outside and Russell, the Cucumber Frog, we now have this little one that likes to hang out in our basement.  It took to sitting on our faucet handle until the day Rob nearly squished it when he reached to turn on the water without checking to see if there was an amphibian sitting there first.  Happily, no injury occurred and the frog hopped over on to the spray bottle where supervision of egg washing could safely be performed. 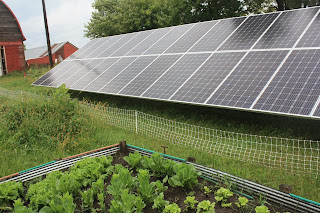 The solar panels have had some pretty nice days to collect rays and convert them to eckletricity.  What?  I can call it eckletricity if I want!  So there!  And, we finally have access to the monitoring site so we can see how well these panels are doing.

We both find it interesting to see how the power generation actually provides us with a partial history of the weather as well.  For example, I remember working outside on September 10 and enjoying a nice, sunny morning.  Then, suddenly a bank of clouds came through and I recall commenting to them that they had NOT been in the forecasts I had read the prior day.  My words shamed them into leaving and the rest of the day was pretty sunny after that. 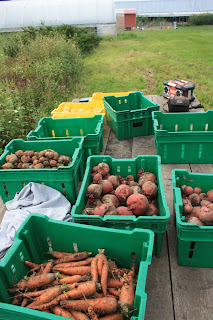 A task earlier in the month was a harvest of beets and carrots from the southwest field/plot.  On this day, I chose to removed the tops in the field rather than pulling them into a building and setting up to remove the tops then.  It was a nice day with a light breeze, perfect temperatures and just enough clouds to make it the nicest place to do the job.  So, why not?

This harvest had us pulling in come Dolciva carrots, Guardsmark Chioggia beets and Touchstone Gold beets.  They are in storage for now, but they'll come out to be a part of CSA shares soon!  Actually, some of the smaller beets have already been distributed because we find the smaller beets store less well than the larger ones.

Now, I am getting hungry for beets.

But, I don't think I'll ever get hungry for carrots.  Yes, that's Rob.  The farmer who grows, but doesn't like, carrots.  That means more for all of you, I guess.

Another crop that is approaching harvest are the cauliflower.  I am not entirely pleased with the damage the grasshoppers are doing to some of the heads, but that's just the way it is sometimes.  There is enough there that I am guessing we'll do ok with the harvest.

I am actually showing this picture for a few other reasons.

1. We did a better job this year getting flowers into our rows at the same time as the crops.  This, despite the late planting and the huge push that had to go on to get the plants in.

2. The brassica successions became ONE succession for cauliflower and broccoli this year.  That was NOT an optimal solution, but it is what happened - for a whole host of reasons.

3. The paper mulch is holding on pretty well for the cauliflower.  On the other hand, the cultivation between rows has not happened as we wanted it to this year.  Once again, for a whole host of reasons.

But, the biggest reason of all is to show you (and ourselves) that we had at least one crop that grew threw the malaise that most of our crops seemed to show in July and early August.  Some of the change in plant health seemed to correspond with the point that our soil started working like 'normal' soil.  It was not until July at some point that we started feeling as if we had more than one inch of soil that wasn't mud.


The net results for production in our Eastern plots is going to be very disappointing this season.  The broccoli was ok, but we didn't have the normal spread of production that successions would bring.  The onions have been pretty good and the cauliflower looks fine.  The garlic was also fine this season.

On the other hand, the summer squash, zucchini, winter squash and melons have all struggled mightily this year.  You know there is something going on when you can't get overwhelmed by zucchini.  There were some nice green beans and we're still trying to find time to pull in the taters.  But, we're not expecting much from them.  As long as we get something, we'll be fine.

As has happened other seasons after excessive moisture, the grasses have been the most successful plant type.  Not exactly what we were going for this season.

To end on a good note, let's go visit Eden.

Ahhhhhhhh!  The tomatoes are attempting to touch the top of the high tunnel.  I don't think they will make it this season, but I don't mind if they wish to try.   The sweet alyssum plants are doing well planted at the base of the trellised tomatoes and we both like how this appears to be working.  The raised beds in Eden have done their job and we're very happy with these plants.

In addition to tomatoes, we've had some quality lettuce, basil, green beans and peppers out of Eden this year so far.  The melons were excellent and we are now pulling the dead vines out so we can put in a Fall crop in their place.  I think, perhaps, the nicest surprise has been the quality tomatoes from Tasty Evergreen, Black Sea Man and Cosmonaut Volkov in this high tunnel.  All have excellent tastes and textures and it is nice to have some good, consistent production from them this season.

And, now, if we could just find a name for our frog friend.
Posted by Rob Faux at 10:20 PM