It is so easy to be upset, angry, disappointed, frustrated and depressed.  In fact, it is frightening exactly how easy it is to give strength to all of the negative feelings.  It has rained too much on the farm again this Fall, so several things aren't going the way we want them to.  I could easily move from there into a mini-tantrum regarding all things 'bad' and that, in itself, bothers me.

Why should I have to work so hard to identify and then enjoy some good things in life?
The answer is, I should stop working so hard to STOP myself from seeing and appreciating positive things.  That certainly doesn't mean that I should turn a blind eye to the rest.  What it means is that I can't effectively deal with the rest if I don't maintain a healthy balance.  And that's why this post is appearing now.

A Strong September for Bees on the Farm 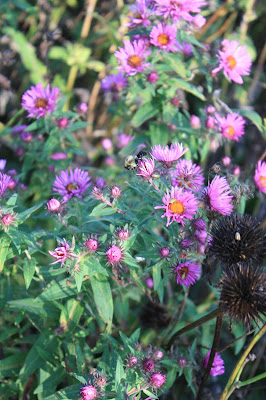 I readily admit that I have been very much feeling that 'doom and gloom' for pollinators on the farm is appropriate.  I remain worried for the health of pollinators and beneficial insects - and for good reason.  But, I have also been reminded this month that Mother Nature has sufficient strength to recover if we just give her a chance.

Our hive of honey bees finally took hold and is very active right now.  We even took a little honey out to give them some more space.  I know better than to get my hopes up that they will survive the Winter.  But, it seems to us that they are setting things up to have a fair stock of food for the Winter.  We have had hives on the farm before and this group is looking better than all previous efforts.

We are also noticing a fair amount of activity on the asters that can be found ALL OVER our farm right now.  Everything from the Thousand Flower Asters to some of the purple and red varieties.  I still believe that the activity is lower than it should be for the amount of habitat we are providing.  But, at least there IS activity.

We have noticed that the bumblebees have declined dramatically over the past three years, but we are encouraged by the bumblers bouncing around on the large marigolds that are inside Valhalla this year.  Does it mean they aren't still in danger?  Of course not. What it means is that some of our efforts are doing something for the bumblebees and other pollinators around our farm.  It's an area we have some control over and it helps to see that our efforts have some positive impact. 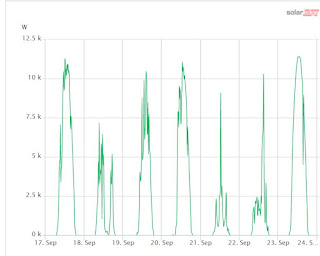 I realize we've put a post out there regarding our new solar array.  We have a good deal more to say about it, but that will come another day when I have the brain space to work on it.  For now, we provide you with a graph from the system that monitors production by our solar panels.

The cool thing about this series is that it shows you how much energy is being generated each day for a week.  Obviously, no power is generated when the sun is down.  Also, the sun reaches the best angle for the solar panels about mid-day, which is why most of these data lines show a peak at that point.

What I hope everyone can see is September 23, the last day of the week being shown.  Other than a very short period in the afternoon, there were no clouds obstructing the sun.  We were "that" close to a a perfect parabola of production.  Ahhhh.  A goal for us!  And, I got to use alliteration.

Not All Harvest is Delayed or Hindered 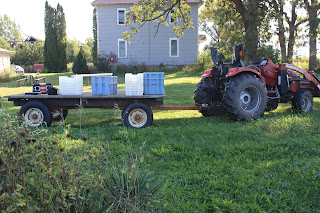 Another thing that I know I tend to do is dwell on the things that I cannot do on the farm.  For example, I really want to dig the potatoes and carrots.  I want to pull the onions.  Etcetera.  But, the wet weather is making some of this impossible.  And, the longer it is impossible, the more likely it is that we lose the crop.

But, that's a negative and we're about positives right now!

The photo at the right shows Rob's typical setup for harvest.  Rosie pulls a running gear with a flat deck to a field that is going to be worked (in this case, the Southwest field on the farm).  Appropriate containers are available along with a scale.  The cart often carries a nipper or a lettuce knife as well as a camera.  Well, ok, the camera doesn't often come along for the ride.  Rainy days often preclude its appearance.  There is also usually some sort of machine playing music for the farmer (also often missing if it is raining or looks like it might rain). 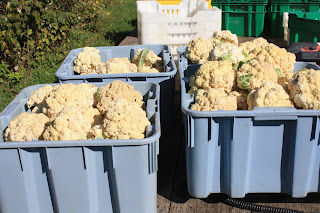 One of the recent projects was to pull in the cauliflower that was ready to harvest.  The wet fall is causing some problems with the quality, but they heads are decent and they taste just fine, thank you very much.

We are participating in a variety trial with Practical Farmers of Iowa this year and we are measuring how Mardi, Amazing and Goodman perform.  I decided not to allow myself to know which variety got planted into which section, so I harvest by labeling them as A, B, C, etc.  The idea was that I wanted to be as objective as I could be as I took notes on quality.  So, what's the problem?

I already know the difference based on their appearances.  So, never mind. 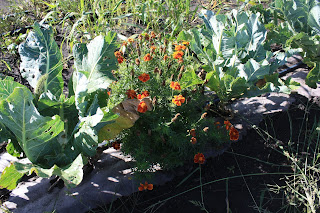 Regardless of whether that worked or not, I will say that I continue to be impressed with Amazing and I am happy enough with Goodman.  I'm not sure what to think about Mardi just yet.

Some folks might be curious to know how I marked sections so I would know when I am harvesting a different type of cauliflower.  So, here is an example at the right.  Use a flower!

I haven't noticed any issues with planting an old-style marigold.  I believe this one is Starfire Signet.  The neighboring cauliflower plants are consistent in growth quality with the rest of their group.

You might observe that there is still paper mulch under these plants.  This is another positive - despite all the wet, we still have paper mulch holding down weeds.  That, uh... weed free things doesn't apply to the rest of the farm.  Oh well. 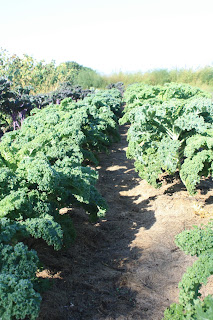 We are also pleased with how the grass mulch is performing in the kale crop this year.  The initial harvest after applying the grass mulch was a little annoying because we had to try to clean out the grass that got into the curly kale leaves.  However, since that time, the kale has actually been CLEANER because we don't get soil splash on the leaves.

The other nice thing about the mulch is that it makes it nicer to harvest on wet days than it would be if it were bare soil.  I think we are sold that the addition of the power rake system was a win for this year.  Now we just have to figure out how to maximize its use and prioritize placement of the mulch.

The most obvious downsides to this system are that you can't get grass mulch if there is a dry season AND collecting/spreading mulch takes time.  But, I have news for you... cultivating and weeding takes time too.  If we can find crops that like the grass mulch option and identify those that prefer paper mulch and those that like cultivation, I think we will be in our best position to handle the difficulties of growing and dealing with weeds.

I am hopeful that we can keep working on optimizing this particular part of our operation in the future - assuming we continue to grow veggies on the farm!  I suspect we will, but the questions are what types of veggies and how much?  These are ok questions to ask in this post because they are not inherently negative!  Ha!  Snuck out of that one, didn't I?

About Those Onions
Yes, we still have onions to pull out of the field.  Tammy and I managed to pull about 400 this morning.  We really do like Redwing on our farm.  I think we have another 500-600 to pull!  Just remember - don't count your onions before they're out of the ground. 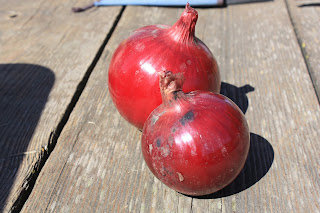 Email ThisBlogThis!Share to TwitterShare to FacebookShare to Pinterest
Labels: a crate full of grateful, farm report