Busy as a Bee Hive?

It is no secret that there has been some activity at the farm over the past few weeks.  We have continued with our campaign to address significant problems with the farm house and the current focus has been on replacing the deteriorating siding (two layers of it) with new.  This, of course, means we have to address rot and other issues as we find them.  We realize there are some people out there (and I suspect you know who you are) that want to see what sort of progress is being made.

The good news?  There has been progress!


Sometimes progress looks a bit like regression.  Ok... sometimes it FEELS like it too.  And, it can get a bit nippy when the wind picks up out here.  But, we are within shouting distance of getting the North side finished as well!  Tammy and Rob have been doing tear-off and Travis and Rory of Duncan Home Services work to make it look good after that.


While we are at it, you might remember that we had a couple of "Pooofs" this past Summer that did a little damage.  It was a little un-nerving to watch the metal on the Poultry Pavilion ripple and emulate the ocean's waves during one of those poofs.  A second poof not long after the first sent several panels flying. 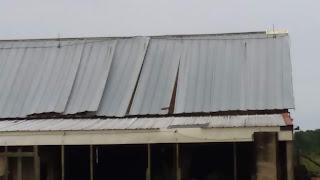 Well, December was the month of making things right.  The guys at J.D. Builders did a nice job, I think.  We had some insurance coverage to help pay for this AND we fully realize that if it were only Rob doing the work, it would take much more than two days.

Much MUCH more than two days.


And, we wanted to show you that we are also making progress on the rest of the house... even though it might look more like regression at the point these pictures were taken.


All of this is not without some backlash. 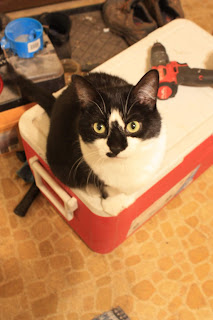 Bree says, "I have a drill, a toolbox and a cooler.  Stop the insanity or I will be forced to use them!"
Posted by Rob Faux at 3:47 PM

Email ThisBlogThis!Share to TwitterShare to FacebookShare to Pinterest
Labels: before and after, fix it faux