After taking a bit of ribbing about having a secret blog that no one could access regarding my alter ego as a philatelist (if you don't know what THAT is, read on), I decided I throw a post out there about that very subject.

Yes, I grow veg, I throw tomatoes to turkeys, I carry shingles in carts that have been thrown off a roof and

Ya, I'm a bit different - but you knew that already.

If this helps any, there are items in postal history that can mesh nicely with what we do. For example, we do use wheel hoes on the farm that are fairly close in design to the Planet Junior. These are an excellent tool for cultivating close to rows of veg. The picture shows an offset system with two wheels and two saddle hoe cultivators behind them so that a person can walk the row and cultivate both sides of the row at the same time. I can tell you that your rows had better be straight! 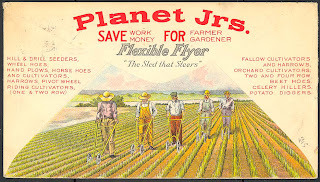 I have long favored a series issued in the US for postage in the 1860's. One of my favorite stamps is here. The 5 cent stamp was typically used in conjunction with other denominations to pay for mail that went overseas to France or some of the German States. 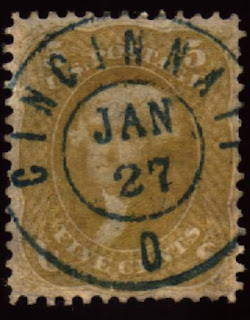 But, if you really want to get into the nitty gritty of what I pay attention to - I collect the 24 cent stamp of that 1860's issue on postal history pieces, such as this envelope that shows five of the 24 cent stamps on it. That's $1.20 in postage in the 1860's! What's worse, this envelope was marked for 6 schillings ($1.44) to be collected by the addressee in Scotland. At the time it was sent, if you underpaid the amount due, it was treated as if you paid NOTHING. I suspect the recipient may have been a little less than appreciative. The content of this envelope had to be good - we can hope. 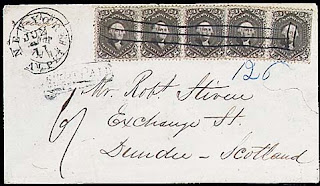