We have a bit of wind on the farm now and again. In earlier posts I alluded to the wind when the roof was being worked on . We are having another such day today. Enough of a wind that I literally was blown off of our back steps as I tried to enter the house. It wasn't just me. DB (one of our outdoor cats) was also blown off of the bench he was standing on. I did, at least, catch my hat before it got away.

In any event, the picture below is of a piece of backing plastic from the roofing that took off as the ice and water barrier was being put down. It went over our mature oak trees and got snagged by the top of the electrical pole. It served as a wind sock (of a sort) for a few trees before coming down. 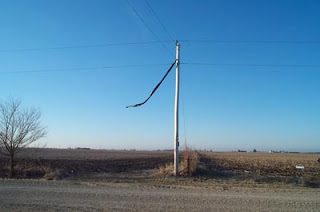 It is windy enough out here that we have considered wind energy. With the biggest issue being that most personal wind energy systems requiring repairs a little too frequently to pay off (according to a few sources we have consulted). So, we are looking at solar generation of electricity for the farm.

Until then - we will capture wind and solar energy with some simple tools. I think you might appreciate one of our clever 'inventions' below. Perhaps some of you could try it as well! (insert smiley face here) 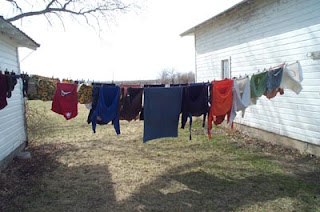