Third in a series of photos we like with various and sundry attached musings.

This installment features some of the wildflowers on the farm.  The area pictured below isn't quite as big as it looks and its origins were not nearly as wild or wonderful as it is now.  But, the Rudebekia, Shasta Daisies, Coneflower, Blue Flax, Monarda and Gaillardia are enjoyable nonetheless. 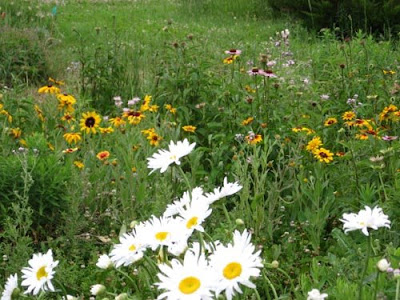 Tammy and I were avid perennial flower gardeners in addition to our vegetable garden prior to our starting the Genuine Faux Farm.  In fact, we moved multiple truckloads of perennials down to the farm from our prior home when we moved.  We also had a penchant for buying seed for various perennials and trying to start them (both in pots and the ground).  The humble beginnings of this area on our farm was as a nursery area where we direct seeded a bunch of perennial flower seed just to see what would happen.

Many of the seed packets were old and we didn't expect much.  We set out neat rows, put in row markers and hand seeded into the soil our first Spring on the farm.  The initial intention was that any plants that started successfully would be integrated into our carefully laid out and cultivated perennial gardens nearby.  I guess we thought that any plant that survived in this area deserved graduation to our featured garden areas.

Sure enough, many of the seeds did nothing.  But, those that came from 'wilder' stock did better.  It was a good lesson in seed viability.  And, as you can likely surmise, we never did get around to transplanting those plants that got a start in this area.  Instead, it was one of those tasks we never quite got around to.  As a result, the plants that took produced their own seed.  Suddenly, we had a patch of wild flowers.  Every year it changes a bit.  Every year we think we might wade in there and yank the weeds that inevitably incorporate themselves into the mix.  But, despite our intentions, we do a little with it and then let it be what it is.

Our farm is, at many levels, alot like this perennial bed.  We went through the process of creating a business plan and working hard to prepare ourselves prior to our first year of running a CSA.  We had an elaborate set of documents.  We had big ideas.  We set about to make them happen to the best of our abilities.  We laid out the rows.  We set out markers.  We planted.

We had intentions that we never quite got to.  We had others that we did.  And, there are others that we still intend to get to.  Our initial plan called for us to stop at a 40 member CSA.  We had 100 members this year and have had as many as 120.  In the beginning, we didn't have a vision that had Rob working on the farm as his full-time job, we planned that he would work part time doing other things.  There were no thoughts of high tunnels, Ford 8n tractors, eight sandpoint shovels or summer workers beyond a few volunteers or periodically hired kids from the community.  Chickens, turkeys and ducks?  Are you kidding?  Why would we do that?  Ironically, some of the best things that have happened on the farm came from events, choices or plans that seemed most difficult, least clear and most risky to us at the time.

There are still vestiges of that first set of plans that are the underpinnings of what we do today.  And, much of those foundations are solid points from which we could begin our journey.  Like this wildflower bed, it became something more than we envisioned.  We still plan great things and we accomplish as much as we are able or are allowed each year.  Yet in the end, we still have to stand back and realize that our farm is what it is.

Every year, there is beauty, there is change, there is success and there is failure.  While our wild flower patch of a farm takes a rest this Winter, there are dreams of how next year will be.  There are new plans and new ambitions.  We will accomplish much, we will fail often (even as we strive to fail less often than we succeed).  Yet, there will still be something wonderful that comes of it.

May there be wildflowers for all of you in the new year!
Posted by Rob Faux at 10:59 PM