Who Thinks This is Cool? 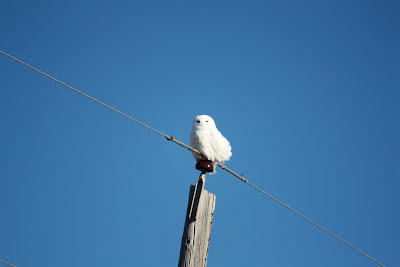 We consider this a great Christmas gift - a very rare sighting of a Snowy Owl in Iowa.  This was located on Highway 9, just east of Armstrong on the morning of December 24.  We have been told there are 63 snowy owls documented in Iowa of which this is one, so it is not a 'new' discover.  They have come further South due to food shortages in Canada. (Thank you Kip for the info!)  To give you an idea of the rarity, we lived in Duluth for a year and were told seeing snowy owls there was uncommon.

Snowy owls are diurnal, so it was not necessarily odd to see this one in broad daylight.  Descriptions of this bird also indicate that they may let spectators, such as ourselves, get relatively close.  Prior to the sighting, neither of us had those facts in our personal databases, so we were even more amazed by its presence.  Apparently it is perfectly normal that it should size us up in broad daylight.

Tammy was driving and saw the bird first.  She slowed and did a U-turn - not telling Rob why.  Her reason was that she didn't believe what she thought she saw and didn't want to say what it was until she could confirm it.  Rob's excuse is that she had asked him a question that involved looking at a map (otherwise he would also have seen it the first time...... HA!  Ok, who knows....but it sounds like a good excuse).

An additional bit of irony for the sighting:  We were listening to a book on tape at the time.  Harry Potter (book 1).  But, prior to Harry getting his Snowy Owl, Hedwig.
Posted by Rob Faux at 7:19 PM