Somebody saw me today and said "Hey!"  I nodded in greeting out of habit, but my brain was thinking "Hay!"

Why was I thinking about hay?  Well, we had two large bales of hay in the field next to the garlic.  We'd spread about 100 row feet already, but still had alot more to go.  We're trying to not let ourselves hibernate and we forced ourselves to go out each day this weekend and do a little work (perhaps more on that later).  But, the effort today focused on spreading the two bales onto as much of the garlic rows as we could.  The good news is that we accomplished spreading the two bales.  The bad news - there is still about 400 feet of garlic to cover.  But, it just so happens a lot of hay was pushed down from the hayloft in the barn.

Oh, did you mention the barn?  Well, of course you did.  That reminds me of something else going on here at the farm.  The barn is on its way out. 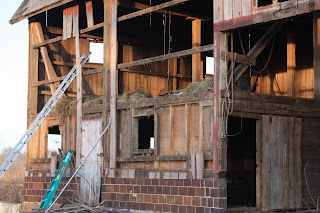 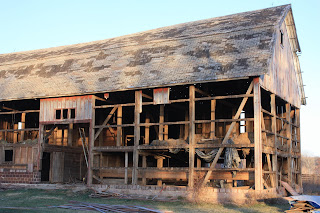 The pictures are not quite up to date with the current situation, but it gives you a feeling for it.  While the demise of the barn is planned and necessary, we still feel sadness about it.  But, perhaps more important, it has added additional work for us on the farm.  Yes, someone else is taking the barn down but....  that barn did provide shelter for a number of things.  And, if we're going to salvage lumber and put our new tools under cover for Winter, we have to do alot of moving.

So, we've been trying to get things moved into the poultry pavilion (PP), the granary, truck barn, garage and house so they have shelter for the Winter.  And, we mentioned that we are trying to get some outdoor work done each day.  Well, we gamely went about doing outdoor work on Saturday.  In that nice cold rain (it certainly dampened our spirits - or at least we were dampened).  We managed to move some lumber and some of our cold frames into the PP, more old windows and hoses into the granary and some sundry other things into the truck barn.

Speaking of Saturday, the Waverly Harvest Market did occur Saturday morning in the Civic Center.  We were pleased to have a good turnout.  The good news?  Higher turnout means sales were fairly good for all vendors.  It also means the likelihood that we will try to continue to make the Harvest Markets continue in 2012 went up.  If this market were as dismal as November's market, we would have dropped the idea for a few years (at the least).  We are hoping that this turnout will encourage other vendors to take it more seriously next year and we can provide all you with even more variety and opportunity!  But more than that, we were impressed and humbled by the support shown to us by our friends, acquaintances and customers at this market.  We are fully aware that many of you made an effort to be there, even if you had much to do and, perhaps, no specific need of any of the items at the market.  You told us you liked having this option available to you.  And, so we will do what we can to keep it coming.

The support we have received over the last year gives us much to be thankful for.  I just realized that we had missed our traditional Thanksgiving post.  If anything on this blog can be said to be 'traditional.'   Our families and friends have been amazingly supportive to our endeavors.  There are many jobs and tasks that have been completed over the past year that could not have been done without their help.  If we find some time, we'll try to show some pictures that show the amazing transformations this farm has undertaken since we have been here.  But, left on our own, these changes would not be so dramatic.

And, speaking of change.... it is hard to comprehend the number of things we've been able to address in the last couple of months.  It also illustrates how things on the farm work (or fail to work).  We've been without a working dryer since some time this summer.  It's not a big deal when we hang our clothes on the line to dry.  Until one gets to the point where clothing freezes on the line.  This is now fixed.  We've also dealt with a kitchen faucet that, for lack of a better description, left much to be desired.  That has been replaced and is working well.  What do farmers do in Winter?  Everything they couldn't get to in Spring, Summer and Fall!
Posted by Rob Faux at 8:10 PM